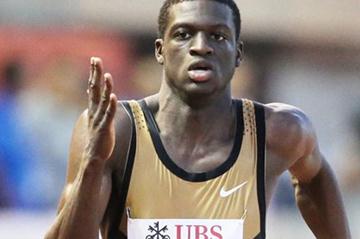 Kirani James’s 400m victory over LaShawn Merritt in Eugene last weekend was one of the most exciting races of the meeting, and the pair will do battle once again over one lap of the track at the IAAF Diamond League meeting in Lausanne on 3 July.

Their rivalry is one of the hottest in the athletics world at the moment. James is the Olympic champion, while Merritt is the world champion. Before last weekend, their career head-to-head record was tied at five each, but now James has the advantage after beating Merritt in Eugene by the slender margin of four thousandths of a second as both clocked a world-leading 43.97.

Both James and Merritt have won in Lausanne once before, Merritt in 2008 and James in 2012. But this will be the first time they have faced one another in the Swiss city.

It won’t be an easy task though, as sprint superstar Usain Bolt holds the meeting record with 19.58, also set in 2012. Blake, whose personal best is 19.26, showed that he is in good shape at the recent IAAF World Relays when he anchored the Jamaican team to a world record in the 4x200m.

Fellow Jamaican Nickel Ashmeade, European champion Churandy Martina and 2011 world bronze medallist Christophe Lemaitre – all of whom have run faster than 20 seconds for the half-lap sprint – will be among Blake’s opponents in Lausanne.

In the men’s 100m, USA’s world silver medallist Justin Gatlin will face 2007 world champion Tyson Gay, who won at this meeting last year in 9.79. European indoor champion Jimmy Vicaut, who clocked 9.95 in his first competition of the summer, will also be in the race.

In the men’s long jump, the top three finishers from last year’s IIAAF World Championships – Aleksandr Menkov, Ignisious Gaisah and Luis Rivera – will be in Lausanne.

In the 3000m steeplechase, two of the three fastest men in history will go head-to-head as Brimin Kipruto takes on Paul Kipsiele Koech.

In the women’s 800m, Switzerland’s Selina Buchel – a surprise fourth-place finisher at this year’s IAAF World Indoor Championships – will have the opportunity to test her ability against Kenya’s world champion Eunice Sum.

In the women’s 4x100m, the host nation will have a glimpse of what to expect at this year’s European Championships, as they will be up against world bronze medallist Great Britain, Germany and France among others, three finalists at the recent IAAF World relays in Nassau.