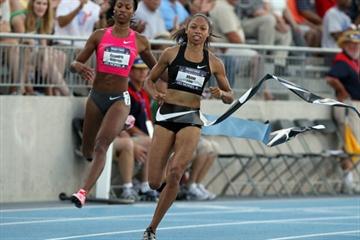 Walter Dix became the fastest man in the USA Friday evening (25) at the USA national championships in Drake Stadium, but it was the women who stole the show as Allyson Felix won her first national title in the short sprint and Kara Patterson set a national record in the Javelin Throw.

Kara Patterson vaulted to fourth on the season's world list in the women's Javelin Throw with her final-round pitch of 66.67m. Patterson added over two metres to the former national record of 64.19m by Kim Kreiner from 2007 and now stands behind only Maria Abakumova, Barbora Spotakova and Martina Ratej in 2010. Patterson opened at 59.62m and improved on four of her five subsequent throws, with her third and fifth attempts also over 62m, and all six of her attempts were good enough to win the competition.

Patterson, only 24 years old, won her third consecutive national title. "I've never had the clapping start for me in a competition, like what happens in the long jump," she said afterward, but her fellow competitors got one started on her final attempt. "Then the crowd got into it, and I threw the American record. So the little extra energy, I guess, was good."

Allyson Felix pulled away from a packed women's 100m field from halfway through and won her first national title at 100m. A five-time national champion at 200m, Felix ran 11.27 into a 2.5 m/s headwind to defeat LaShaunte'a Moore (11.34) and Tianna Madison (11.43) decisively.

"I was hoping for [the win]," said Felix. "I came with the attitude of having fun and doing some speed work, so I did have a lot of fun."

Felix added, "I wanted to focus on my start," but after the third-slowest reaction time in the blocks Felix was making up ground.

Nobody else in the field could hold their speed like the three-time World champion at 200m, however. "The end of my race is usually the strongest, so I wanted to rely on that," she said, and it was her closing speed which won it for her.

Kimmons was the fastest qualifier out of the semi-finals, his 10.17 clocking there the second-best of the day, but Dix was the one who came through when it counted. He'll return Saturday and Sunday in the 200m.

"I think I should have done a little better start," Dix said. "I wasn't surprised (to win). I was planning on running a good time. My goal is to win the double, but ultimately I just want to win."

After winning his first USA Triple Jump championship in 2003, Kenta Bell finally came back for another one. Bell finished up the first round of jumping in the lead after reaching 16.61m on his first attempt, then got out to 17.02m on his third. Bell wasn't satisfied with that mark, taking all three remaining attempts to improve, but in the end it was still good enough to best Christian Taylor (16.76m) and Lawrence Willis (16.69m.)

Mark Hollis won a tactical men's Pole Vault at 5.60m. With nearly half the field failing to clear a height in the swirling winds, Hollis and Derek Miles were the only vaulters over the third height, 5.60m, and Miles had one miss there while Hollis had none. Both opted to pass 5.65m and go directly to 5.70m, which neither cleared, leaving Hollis the victor.

Defenders in the throws

Casey Malone who picked up a second consecutive Discus Throw title, delivering a 62.36m first release which established him in the lead and improving it to 62.57m in the third round, which stood as the winning mark. The breezy conditions were tricky for the throwers, with current world number-two thrower Jason Young only managing 61.15m in the fifth round.

Jake Freeman picked up the Hammer Throw win after a second-round 76.51m mark.

Bernard Lagat added another national title to his national record in the 5000m, staying out of trouble in the crowded field (sometimes even coming to the front) until he finally kicked away with less than 200m remaining. Lagat's pedestrian winning time of 13:54.08 was underlined by the fact that his national record time passed with the field having more than one lap remaining to race.

Jen Rhines tried to steal the 5000m, jumping out to a 40m lead after about half the race had gone by, but late in the race it was Lauren Fleshman who delivered the tremendous last lap to close the gap. Fleshman then outran Molly Huddle and Jenny Barringer. Not unlike Bell, Fleshman's last national title was years ago, coming in 2006.

Thursday evening's other final was the women's Triple Jump, which was dominated by Erica McLain. McLain put up a competition-winning leap of 14.18m (with a tailwind of 2.1m/s) on her first attempt, then recorded four consecutive fouls as she tried to get a wind-legal mark over the stadium record. She eventually managed that with a 14.15m mark (+0.4m/s) in the sixth round, giving her two marks good enough to win.

Competition in Des Moines will continue on Saturday (26) with finals in nine events and the second days of the Heptathlon and Decathlon - click here for separate first day report - Athletes expected to contend for titles on Saturday include Sanya Richards Ross, Jeremy Wariner, Bershawn Jackson and Chaunte Howard Lowe.