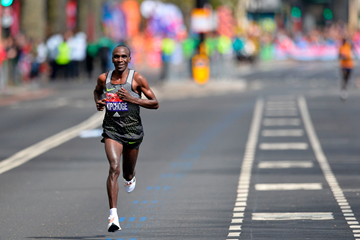 Olympic marathon champion Eliud Kipchoge and world half-marathon champion Peres Jepchirchir will be in action at the Airtel Delhi Half Marathon, an IAAF Bronze Label Road Race, on Sunday (20).

But such is the quality of the fields assembled for the race, the two global champions are by no means assured victory.

Kipchoge has amassed an incredible record at the marathon distance, winning seven of his eight marathons to date – including the Olympic race – and clocking 2:03:05, the third-fastest time in history.

But his record at the 13.1-mile distance is somewhat more varied, with just three wins from his seven career races. His last half-marathon outing was in Ras Al Khaimah last year, where he finished sixth.

Nevertheless, the 32-year-old spoke confidently at the pre-race press conference and says he hopes to improve on his personal best of 59:25, set on his half-marathon debut in 2012.

“The aim is to better my own (personal) record as I treat myself as my biggest competitor,” said Kipchoge, who will be contesting his first race since his Olympic triumph. “The course here is really flat and it will help in maintaining good speed and producing a good time. I want to go below 59 minutes.

“Although it is a bit hot during the day here, it is quite cool early in the morning and that will be ideal for running.”

If all goes well, Kipchoge could also challenge the course record of 59:06, set by Guye Adola in 2014, and even the world-leading mark of 58:44, set by Kenya’s Solomon Kirwa Yego earlier this year.

Kipchoge is the fastest man in the field but he is taking nothing for granted, especially as Ethiopia’s Yigrem Demelash will be lining up alongside him.

Kenya’s world indoor 3000m bronze medallist Augustine Choge contested his first half marathon just two months ago. Although his winning time of 1:03:25 was relatively modest, he won the race comfortably and could be poised for a big breakthrough against world-class opposition this weekend.

Peres Jepchirchir will be chasing the course record of 1:06.54 set by her compatriot Mary Keitany in 2009. She will also look to extend her winning streak to four consecutive half marathons after her recent victory in Valencia.

“Mary’s record is a good one but my time of 1:07:09 in Valencia showed that I am in good shape,” said Jepchirchir.

“I have felt no ill-effects from my run in Valencia and I am getting ready to return to India and hope to run well again, especially if I have a month’s good training.”

Jepchirchir’s PB of 1:06:39, set when finishing fourth at the Ras Al Khaimah Half Marathon in February, is faster than the Delhi Half Marathon course record, so going into new territory in the Indian city is certainly not an unreasonable target.

In a year which has seen Jepchirchir establish herself as one of the world’s top road runners, her race in Ras Al Khaimah was her last loss. Since then, she has recorded six successive victories over 10km and the half marathon.

But she won’t be the fastest woman on the start line in Delhi. Ethiopia’s Worknesh Degefa and Kenya’s Mary Wacera both have quicker half marathon personal bests, having clocked 1:06:14 and 1:06:29 respectively in races earlier this year.

Wacera took bronze behind Jepchirchir at the IAAF World Half Marathon Championships. She clocked a PB of 1:06:29 earlier this year in Houston and last month won the Boston Half Marathon in 1:10:19.

Degefa’s PB of 1:06:14 makes her the fastest in the field. She has just one victory to her name this year, a 1:07:08 win from the Rome-Ostia Half Marathon in March, but has been consistent in all of her outings.

Gladys Chesire, who finished sixth at this year’s World Half Marathon Championships, world cross-country bronze medallist Netsanet Gudeta and world marathon silver medallist Helah Kiprop are also in the field and should pose a strong threat.

World 10,000m silver medallist Gelete Burka could also spring a surprise. The Ethiopian has only contested one half marathon to date, running 1:15:38 at altitude in Bogota two years ago. But based on her form from this season – including a 30:26.66 PB in the Olympic 10,000m final – she looks set to significantly improve on her PB.

Also look out for 2014 world U20 5000m champion Alemitu Heroye, who will be making her half-marathon debut.