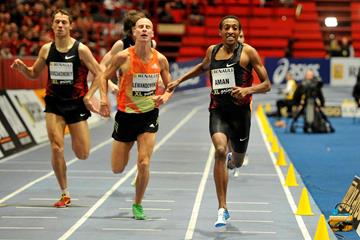 The Russian capital is currently frozen, with temperatures about -20C, but the traditional Russian Winter indoor meeting, the second of this winter’s IAAF Indoor Permit meetings, should warm things up on Sunday (2).

Ethiopia’s Mohammed Aman, the world 800m champion indoors and out, will be one of those trying to raise the temperature in the CSKA Arena.

Aman has fond memories of his last trip to Moscow in August, when he won at the 2013 World Championships. He is now aiming for the world indoor 600m best which has stood to Germany’s Nico Motchebon at 1:15.12 since 1999.

Still only 20, he has not lost a single race in Moscow throughout his whole career and came close to that mark at the 2013 edition of the Russian Winter meeting, clocking 1:15.60. This year, the organisers have prepared a strong list of competitors, who should push him even harder.

Among those is Poland’s Adam Kszczot, the second-fastest man in history over 600m indoors, who holds the meeting record at 1:15.26 when he won two years ago. The two-time European indoor 800m champion arrives in the Russian capital fresh from an impressive win in Dusseldorf over four laps of the track on Thursday night.

Also in the field will be USA’s Erik Sowinski, who clocked 1:15.99 at the Russian Winter meeting last year and then two weeks later set a US indoor best of 1:15.61.

This means that the 600m race in Moscow will have three of the five fastest men of all time over the distance, all of them having got within half a second of the world indoor best in recent years.

Another event that could see world record attempts is the men’s high jump, starring the in-form Olympic champion Ivan Ukhov.

In his three competitions in 2014, Ukhov has not jumped below 2.36m. On 16 January in Chelyabinsk, he cleared 2.41m to equal the third-best indoor jump in history.

Ukhov has won at the Russian Winter meeting four times already, and owns the meeting record of 2.39m from back in 2007.

Four of Ukhov’s rivals on the start list already boast 2.30m jumps or higher this winter. Among them is Ukhov’s long-time domestic rival and 2008 Olympic champion Andrey Silnov, and Ukraine’s Andriy Protsenko, who has a recent personal best of 2.33m.

Representing the new generation of Russian high jumpers is 23-year-old Lev Missirov, who cleared a personal best of 2.30m two weeks ago, the same as his more experienced compatriot Ivan Ilyichev.

The men’s long jump promises an intriguing battle and the current world lead of 8.10m by Zimbabawe’s Ngonidzashe Makusha is under threat.

Makusha himself will have to fight against home star and world champion Aleksandr Menkov, the latter making his 2014 debut.

Russians Pavel Shalin, with a recent indoor best of 8.08m, and Alexander Petrov, as well as Panama’s 2008 Olympic champion Irving Saladino, Australia’s 2010 world indoor champion Fabrice Lapierre and France’s Salim Sdiri, make it one of the strongest long jump fields likely to be seen this winter outside of the forthcoming IAAF World Indoor Championships.

Trammell turns back the clock

Like Aman, Trammell has never lost a single race in Moscow, although the last time he appeared in the Russian capital was when taking the gold medal here at the World Indoor Championships in 2006.

Another near veteran, St Kitts sprinter Kim Collins, will try to take the 60m title off the USA's Mike Rodgers.

World indoor 800m gold and silver medallists Pamela Jelimo and Natalia Lupu are set to repeat that duel once again over four laps of the track.

Both are now better known as 400m hurdlers but Czech Republic’s Denisa Rosolova and Russia’s Irina Davydova will run the 400m indoors without the obstacles in Moscow and already have fast times to their name this winter.

However, 52.87 for Rosolova and 52.72 for the Russian may still not be enough against in-shape US sprinter Francena McCorory, who has run 51.79 and heads the world list.

McCorory’s compatriot Natasha Hastings and Russia’s Kseniya Ryzhova are also in the field.

The Russian Winter meeting will also host the official farewell ceremony for jumpers and former world champions Tatyana Lebedeva and Yaroslav Rybakov, who both announced the end of their careers last summer.

Natalya Maryanchik for the IAAF