The IAAF Diamond League opened in Doha on 9 May with one dominant thrower in action – New Zealand’s Valerie Adams notching her 46th straight victory in the women’s shot put – and now it’s the turn of Croatian discus thrower Sandra Perkovic to try to impress in Shanghai on Sunday (18).

Perkovic compiled a perfect Diamond League season last year, winning at all seven meetings at which the women’s discus was contested. She also won at the IAAF World Championships; her only blemish in the year was a late-season loss to the USA’s Gia Lewis-Smallwood, ironically on home soil in Zagreb when she was under the weather but felt duty-bound to compete.

One or two withdrawals notwithstanding, Shanghai boasts a glittering collection of stars for what is billed as its 10th anniversary meeting, harmoniously comprised of five years in the Diamond League and another five as part of earlier IAAF competition structures.

No fewer than nine world champions from Moscow 2013 are here.

Three events – the men’s 110m hurdles and javelin, the women’s 3000m steeplechase – can boast all three medallists. Another five – the men’s 400m hurdles, pole vault and shot put and women’s 1500m and discus – have the gold and silver medallists from Moscow.

On her arrival in Shanghai, Sandra Perkovic gave notice of her intent to remain on top.

She has started this year in impressive form, sitting atop the world list with a 70.51m monster throw at the Croatian winter throwing championships on 1 March.

Perkovic’s toughest challenger here could be the resurgent Dani Samuels.

Samuels was the youngest-ever world champion in her event when she won in Berlin five years ago, but has mainly marked time since. However, this year the Australian improved to 66.81m at the Australian championships and then sent her implement to 67.99m in Germany last weekend.

Lewis-Smallwood is also in the field along with Moscow silver medallist Melina Robert-Michon of France.

With Egypt’s Abd Ihab El Rahman also out near 84 metres already this year, a great contest in the javelin for the Diamond Race points seems assured.

The shot put looks just as close, the field headed by Germany’s world champion David Storl and world silver medallist Ryan Whiting, the US thrower getting his revenge by retaining his world indoor title in March, backed up by Poland’s giant Tomasz Majewski, and USA’s in-form 2009 world champion Christian Cantwell.

The Frenchman lost to Germany’s Raphael Holzdeppe in Moscow last year but in February in Donetsk displaced Sergey Bubka as world record-holder with a clearance of 6.16m.

Lavillenie badly gashed his ankle on his first attempt at 6.21m, but he is back in good health and aiming to be consistently at six metres and above this year.

Holzdeppe and Malte Mohr ensure a strong German presence and world indoor champion Konstantinos Filippidis of Greece could be prominent as well.

Early season action in the women’s high and long jumps and men’s triple jump has been a little sedate by comparison with last year.

Spain’s European champion Ruth Beitia and Russia’s Irina Gordeyeva of Russia are the only two women to have lifetime bests exceeding two metres in the high jump, while Moscow minor medallists Blessing Okagbare of Nigeria and Serbia’s Ivana Spanovic, as well as Russia's current world leader Darya Klishina, look to be the pick of the long jump.

In the triple jump, the interest will also centre around Russia's world indoor champion Lyukman Adams, the return of Phillips Idowu, who has been training and competing in Australia, and the 2012 Olympic and 2011 world champion Christian Taylor, who is having his first outing in his specialist event this year, as well as China’s Dong Bin.

Two years ago, Ethiopia’s Hagos Gebrhiwet announced himself with a win over a strong field in the 5000m at this meeting.

Now, he is back as a world silver medallist and the man to beat. His countryman Yenew Alamirew and Kenya’s Edwin Soi pose the most obvious threats in a race which may come down to who has the biggest kick.

Sweden’s Abeba Aregawi and USA’s Jennifer Simpson went one-two in the 1500m in Moscow and could again fight out the event here.

Aregawi can run a fierce sustained pace and is at home in a kicker’s race, which has given her an edge over her US rival in the past.

The women’s steeplechase field is headed by the three World Championships medallists: Milcah Chemos and Lidya Chepkurui of Kenya and Ethiopia’s Sofia Assefa. And they should fight the event out here, too.

With neither David Rudisha nor Mohammed Aman in the field, most interest in the men’s 800m will centre around Olympic 1500m champion Taoufik Makhloufi’s continued comeback from injury, the Algerian setting a personal best over the longer distance in Doha.

Charles Dickens’s Oliver Twist got into trouble asking for more, but David Oliver has prospered coming back for a second serving in the sport after injury threatened to derail his hurdles career.

The personable US sprint hurdler won in Moscow last August and opened his Diamond Race campaign with a win in Doha.

Moscow minor medallists Ryan Wilson and Sergey Shubenkov will make him earn any points he gets here, while China’s Wenjun Xie will be roared home by the local crowd.

Trinidad and Tobago’s world champion Jehue Gordon and runner-up Michael Tinsley, from the USA, clash in the 400m hurdles while Moscow silver medallist Justin Gatlin heads up the 100m field.

Much of the interest in the former centres around Jamaica’s world champion Shelly-Ann Fraser-Pryce while US sprinter Allyson Felix, a ‘DNF’ in the World Championships 200m final last year, returns here at the 400m as she builds towards 2015 and 2016.

Sixteen of the 32 Diamond League races were launched in Doha. Another 15 will get under way in Shanghai. The men’s 110m hurdles is the only one being repeated from Doha in Shanghai, which leaves just the women’s 100m hurdles to make its first appearance, which will be in Eugene at the end of the month. 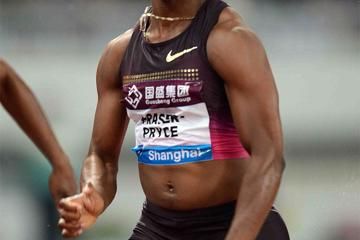 Fraser-Pryce tops the star-studded billing in... 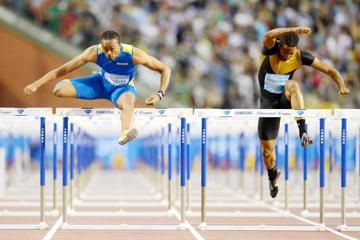 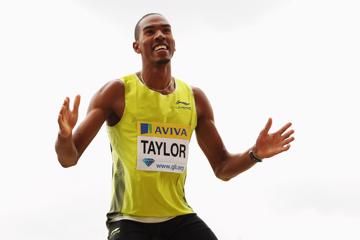 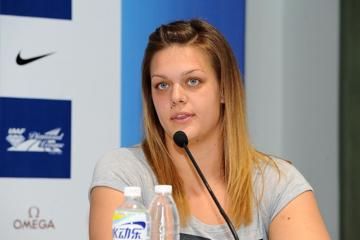