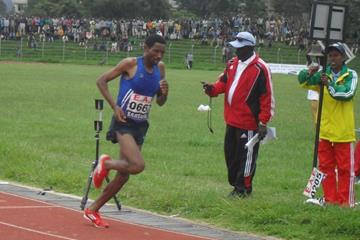 Belete Assefa, winner of the men’s 10,000m on the first day, completed an impressive double when he also took the 5000m title on the fifth and last day of the 42nd Ethiopian athletics championships in Assela on Sunday (30). Assefa was hardly challenged on the way to victory.

A slow start to the tactical race only began to take shape on the seventh lap when the leading pack was whittled down to five with Assefa comfortably at the head of the pack.

With two laps left, his persistent pushing of the pace at the front meant that Chala Lelisa was the only one left to challenge him.

Lelisa showed some audacity with 600 metres to go by trying to pull away from Assefa, but the latter would have none of it.

After a blistering final lap, he stopped the clock at 13:42.65 to become the first runner since Sileshi Sihine in 2003 to complete a men’s long distance double at the national championships.

"It was not in my plan to run the double,” commented Belete. “I was supposed to go to the USA for the July 4 Peachtree road race after my 10000m victory, but later I decided to double for my club and for myself. I also considered this race as training for another road race in Atlanta."

Melese shows her mettle against the marathoners

For Yebrgual Melese, the championships were always going to be another opportunity to take her bustling cross country credentials to the track and the 21-year old delivered in some style to take the women’s 10,000m in windy conditions.

The race had been billed as the battle between the cross country and the marathon with Melese, a member of Ethiopia’s 2013 IAAF World Cross Country Championships team and an accomplished half Marathon runner without ever going the full distance - taking on 2011 New York Marathon champion Frehiwot Dago and Abebech Afework, the 2011 Egmond Half Marathon winner.

However, it was Ruti Aga, the 2012 World Junior Championships 5000m silver medallist, who was to pose the biggest challenge Melese.

Melese and Aga exchanged the lead in the middle stages of the race, which had the effect of reducing the leading pack to just four runners with 10 laps of the race remaining.

Dado dropped out of the race with 4km remaining while Afework’s challenge ended a lap later when she was started to drift backwards.

With seven laps left, the contest was a two-horse race with Melese and Aga and then a 50 metres gap to their nearest rivals.

With two laps to go, Melese started to move away and quickly opened up a 15 metres gap over Aga, which grew further from the bell before the former  crossed the line in 33:32.63.

"Today's race was good but the heavily cloudy weather condition was a bit difficult,” said Melese.

If the men’s 5000m and women’s 10,000m were contests dominated by their eventual winners, the men’s 1500m was a master class in finding the right moment to kick by unheralded Aman Kedi.

Kedi would have none of the front-running duties but, instead, he saved his energy for a mad dash in the final 10 metres of the race to overtake Soressa Redi, long-time leader of the race, virtually on the line in 3:39.92.

“I have been trained hard since I heard the championship will be held in Assela,” said Kedi, a former soldier in the national defence forces, who cut his teeth in competition by taking part in events for his battalion.

“I have been training hard to win it. My participation last year was not impressive (he finished 8th), that disappointed me and made me train day and night.”

Victory in the corresponding women’s race went to 18-year-old Sofiya Shemsu, who was largely untroubled on the way to a 4:17.33 victory.

“I picked an injury at the 2013 World Cross Country in Poland (where she finished sixth in the junior race) and have been recovering since,” she said. “I had no significant plan to come and compete here, but eventually I came to Assela and wanted to try the 1500m.