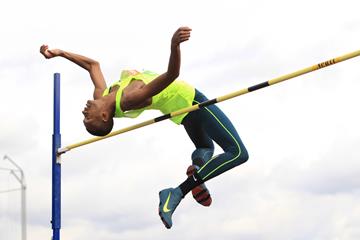 Mutaz Essa Barshim won the latest high jump battle with his arch rival Bogdan Bondarenko at the Sainsbury’s Birmingham Grand Prix, an IAAF Diamond League meeting, as both men cleared 2.38m in another high quality contest that caught the imagination of the 13,000 capacity crowd on Sunday (24).

Barshim had beaten the Ukrainian in Rome when he leapt 2.41m but Bondarenko came out on top in their stunning competition in New York when both cleared 2.42m and the latter won again in Monaco before going on to claim the European title in Zurich last week.

However, the Qatari was the slightly fresher man this time and won on count-back with a clean card from 2.24m to 2.35m while Bondarenko failed his first attempt at 2.28m.

Canada’s Derek Drouin and USA’s Erik Kynard both needed three tries to clear 2.32m, and the pair fell away at 2.35m, leaving the two principles to battle it out.

And what a battle it was.

Barshim was jumping first so after two fails at 2.38m, he was the first to face elimination. He watched the women’s two milers go by, settled himself and arched over the bar.

It was a stadium record for the Qatari, but there was little time to celebrate. Bondarenko now had to respond; and respond he did.

Taking off further away from the bar, the Ukrainian attacked at speed and swept over.

Barshim was first to fail at 2.41m, leaving Bondarenko with one jump to win. He was close, merely brushing the bar with his heels on his third effort, but not close enough and Barshim took his second IAAF Diamond League victory to close the gap in the Diamond Race to four points.

“I’m happy I got the win which is all that matters,” said Barshim “It’s the battle they are all talking about: Barshim versus Bondarenko.

“I’ve got a lot of competitions coming up so there is a lot to still compete for.”

The high jumpers may have it all to play for in the Diamond Race, but Caterine Ibarguen clinched victory in the triple jump with her fifth IAAF Diamond League win of 2014.

The Colombian world champion has dominated the event for the past two years and leads the 2014 world list by almost half a metre with 15.31m.

She didn’t need to reach that sort of distance this afternoon, her first-round effort of 14.52m enough to take the four points ahead of Kazakhstan’s Olympic champion Olga Rypakova, who was competing for the first time since September 2012, having given birth last year.

All five of Ibarguen’s attempts were beyond 14.30m, while her closest challenger in the Diamond Race, Jamaica’s Kimberley Williams, could only finish fourth with 14.04m, behind another Colombian Yosiris Urrutia.

Valerie Adams came to Birmingham knowing she already had the shot put Diamond Race in the bag, but the giant New Zealander had plenty to celebrate nevertheless as she clocked up her 55th consecutive victory in a low-key contest.

Adams’s first-round effort of 19.96m was enough to beat Germany’s European champion Christina Schwanitz, although she posted two more efforts over 19.90m. Schwanitz was clear in second with 19.27m.

While one win-streak goes on and on, another came to an end in the women’s javelin when Barbora Spotakova lost her first contest of 2014.

The great Czech struggled to find her rhythm early on, as she did at the European Championships in Zurich last week, but this time she was unable to reproduce her late-late win and relinquished victory to Elizabeth Gleadle.

Both produced their best efforts in the second round, the Canadian throwing 64.49m to Spotakova’s 62.89m, some 10 metres short of the latter’s world record, and Spotakova was just relieved not to lose ground to her main Diamond Race rivals.

“The most important thing is the points,” she said. “Elizabeth won today and it was good as she took points away from my rivals.”

Slovenia’s Martina Ratej, who is second in the standings, was fourth today behind Germany’s former European champion Linda Stahl.

Fabiana Murer was another big name casualty, the Brazilian failing to clear her opening pole vault height of 4.47m. Jenn Suhr struggled too, hampered by a damaged hand, and the Olympic champion went out at 4.57m, leaving two Greeks with the spoils.

Ekaterini Stefinidi was the only one over 4.57m and took maximum points from compatriot Nikoleta Kiriakopoulou.

Harting gets second win in as many days

The men’s discus kept the crowd entertained early on as the lead changed hands numerous times in the opening three rounds until Robert Harting, who had won in Warsaw on Saturday and made a mad dash across half of Europe to be in Birmingham, found his range and whipped one out to 66.27m to lead at half way.

With victory in the bag, the German duly hit 67.57m to end the competition. Diamond Race leader Piotr Malachowski was second with 64.98m, the Pole maintaining a six-point lead in the standings with one contest left.

There was disappointment for the home crowd when Greg Rutherford could finish no higher than fourth in a close long jump contest, the reigning Olympic, Commonwealth and European champion reaching only 8.04m.

Olympic triple jump champion Christian Taylor snatched victory in the sixth round by one centimetre from South Africa’s Zarck Visser with 8.09m, China’s Li Jinzhe was third with 8.06m.