Mo Farah improved on a 36-year-old European best for two miles to bring the Sainsbury’s Birmingham Grand Prix to a rousing finish at the Alexander Stadium, the last in a series of ‘non-standard’ distance bests at the IAAF Diamond League meeting on Sunday (24).

Ovett’s almost-ancient mark of 8:13.51 was the aim for Farah on the second birthday of his twin daughters and he didn’t disappoint them or the crowd

After passing half way in 4:07.8 he took the lead with three-and-a-half laps to go and opened a 50-metre gap on his training partner Zane Robertson.

He took the bell with 7:10 on the clock, needing a 62-second last lap, a relatively easy task for the fast-finishing Briton.

Farah romped home to win by almost 15 seconds, the length of the straight in front of Robertson.

“I was a bit tired going into it,” said Farah, who completed a second 5000m-10,000m double at the European Championships just a week ago

“I had to push myself to get that win but once I got into it, I got better and better. I was looking at the clock thinking ‘I can do it’.

“Last week has definitely given me a lot of confidence, I know I have a lot of speed on that last lap.”

The crowd already had much to admire on the track, including David Rudisha’s world best attempt over 600m and Mercy Cherono’s African best in the women’s two miles, plus meeting records for Kenyans Jairus Birech and Asbel Kiprop in the 3000m steeplechase and one mile respectively.

Rudisha’s run will actually go down as one of the meeting’s three world leads (the others coming in the two mile races), and the Kenyan indeed showed something of his old front-running form to win in 1:13.71.

The target was Johnny Gray’s world record of 1:12.81 and Rudisha certainly attacked. Eschewing pacemakers, he went through 200m in 23.25 before hitting the 400m mark between 46 and 47, bang on his predicted schedule.

The task from there, the Kenyan said yesterday, was to push over the last 200 metres and that’s what he did, striding ever further away from the field around the bend to raise everyone’s expectations before he tired over the final 50 metres

It may not have been the world best everyone had hoped for, but it was still the fourth quickest of all time and less than a second off his target; not bad for a man still on the comeback trail from injury.

As the record slipped away, Poland’s European 800m champion Adam Kszczot came through for second in 1:14.69, saying later that he could have won if he hadn’t chased Rudisha early on.

There may have been no record for Rudisha but there was for his fellow Kenyan Mercy Cherono, who led home a Kenyan one-two-three in the women’s two miles.

Cherono tracked Genzebe Dibaba in the leading group of seven over the last four laps, then burst past the Ethiopian and Viola Kibiwot at the top of the finishing straight to cross the line in a world-leading 9:11.49.

Kibiwot chased her to the line to record a personal best of 9:12.59 while Dibaba slipped back to fourth.

Kiprop's finish was impressive too as he took the 62nd Emsley Carr Mile in 3:51.89, following a litany of famous names into the historic book where the event’s winners sign their names.

The world 1500m champion made it look easy when swept off the final bend to pass three men down the home straight.

Djibouti’s Ayanleh Souleiman prevented a Kenyan sweep by hanging on for second ahead of Vincent Kibet and James Magut as 14 men broke four minutes.

Birech continued his brilliant form this summer with a solo run in the steeplechase that brought him home in 8:07.78.

It may have been much closer to eight minutes but for the 21-year-old Kenyan slowed to wave at the crowd as he rounded the final bend and stopped completely at the last barrier before hitching himself over with his hand.

It didn’t make much difference to the result, however, as he had a 70-metre lead and strolled across the line to break the meeting record by almost 12 seconds.

Brimin Kipruto followed him home in 8:16.61 as Kenyans filled the first seven places.

Lynsey Sharp got revenge on Eunice Sum in the women’s 800m, the Commonwealth Games silver medallist beating the woman who took gold in Glasgow with a late run in 1:59.14 and Kirani James wrapped up his season with a second Diamond League win, holding off Botswana’s Isaac Makwala in 44.59, just 0.10 outside Iwan Thomas’s 17-year-old meeting record. 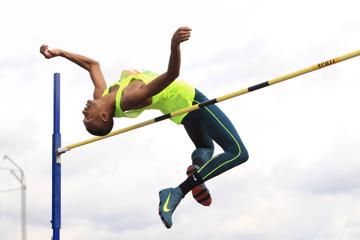 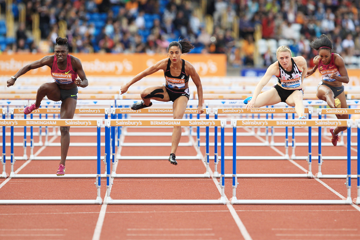