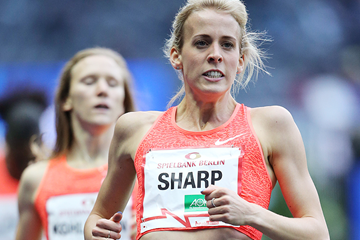 Redemption for Sharp, Amos and Harper Nelson in Berlin

Little can compensate for missing out on a World Championships final, but the likes of Lynsey Sharp, Nijel Amos and Dawn Harper Nelson could take at least a bit of consolation from their victories at Berlin’s ISTAF, an IAAF World Challenge meeting, on Sunday (6).

Paced through the first lap of the women’s 800m in 57.65, world champion Marina Arzamasova led along the back straight. But Germany’s Fabienne Kohlmann and Britain’s European silver medallist Sharp moved past the Belarusian just before the 600m mark.

Sharp then hit the front with 100m to go and was never challenged, crossing the line in 1:57.71 to take more than a second from her PB. Her time was the fastest by a Briton since Kelly Holmes’ victory at the 2004 Olympics.

“Coming to Berlin, my last competition of this season, I told myself I want to finish with a better time than I showed so far, so I was very determined to go fast from the beginning,” said a delighted Sharp, who missed out on making the 800m final at the recent IAAF World Championships in Beijing. “It didn’t work out well for me in Beijing but I knew I am well prepared and in a good shape so I proved it today.”

The men’s two-lap event played out in similar fashion with Amos, another athlete who missed out on the World Championships final, winning comfortably.

The Botswanan Olympic silver medallist was the only athlete near the pacemakers as they went through 400m in 49.52. With 200 metres to go, Amos was away and clear; the chasing pack, led by world silver medallist Adam Kszczot, had left themselves with too much to do.

Competing in her first race since crashing out of her semi-final at the World Championships, US sprint hurdler Dawn Harper Nelson returned to winning ways in Berlin. The 2008 Olympic champion was up against world leader Sharika Nelvis and European champion Tiffany Porter, but came away with the victory in a close race, stopping the clock at 12.82.

Nelvis was second, just 0.02 in arrears, with Porter taking third in 12.92. Surprise world silver medallist Cindy Roleder was fourth in 12.95.

“It was difficult for me to recover after Beijing and my fall,” said Harper Nelson. “I felt physically OK, but mentally it was tough. My race today was OK, but a bit too chilly.”

The men’s sprint hurdles was similarly won by an athlete who missed out on making the World Championships final. Competing on his 26th birthday, Jamaica’s Andrew Riley was pushed all the way by Shane Brathwaite, but held on to win by 0.02 in 13.40.

The men’s pole vault was billed as one of the headline events of the meeting as it featured all five medallists from the recent World Championships. But it didn’t quite live up to expectation as world record-holder Renaud Lavillenie failed to clear a height, Germany’s world silver medallist Raphael Holzdeppe got over just his opening bar, and world champion Shawn Barber had one of his lowest finishes this season, placing third with 5.64m.

In among those disappointments, joint world bronze medallist Piotr Lisek came away with the victory with 5.74m, winning on count-back from world indoor champion Konstadinos Filippidis.

World champions Piotr Malachowski and Christina Schwanitz fared better in their events. Malachowski led the discus from the outset, opening with 64.31m, improving in the second round to 65.24m and then ending his series with 66.13m.

Germany’s Christoph Harting also saved his best throw for the final round, but his 65.15m wasn’t enough to topple the Pole.

Schwanitz was similarly dominant. All four of her valid marks, the best of which was 19.66m, would have been enough to win. World bronze medallist Michelle Carter was second with 19.19m.

Germany’s other world champion, Katharina Molitor, led the javelin for the first two rounds but was overtaken by Israel’s Marharyta Dorozhon, who threw 63.24m in round three. Just like in Beijing, Molitor produced her best mark of the day in round six, but her 61.19m effort was still more than two metres shy of Dorozhon’s winning throw.

Like Molitor, Germany’s two-time world shot put champion David Storl also had to settle for second place. He briefly took the lead in the second round with 20.92m, but New Zealand’s Tom Walsh regained it with his 21.47m effort in round three. Storl improved to 21.19m in the next round, but could not catch Walsh.

But there was success for the host nation in the women’s hammer. Part of the IAAF Hammer Throw Challenge, world champion and world record-holder Anita Wlodarczyk was a late withdrawal from the meeting. It meant Kathrin Klaas had a relatively easy path to victory; the German took the lead in the second round and then improved to 71.19m and 72.09m in rounds four and five, winning by more than a metre from USA’s Amber Campbell.

Kenya’s Virginia Nyambura bounced back from her World Championships disappointment to win the 2000m steeplechase. Her winning time of 6:02.16 is an African record and the second-fastest time in history, behind the 6:01.20 split Gulnara Galkina recorded en route to her world record and Olympic title in 2008.

Compatriot Beatrice Chepkoech was a close second in 6:02.47 and world bronze medallist Gesa Felicitas Krause smashed her own German record with 6:04.20 in third.

Elsewhere, Kim Collins won the men’s 100m in 10.13, Ivana Spanovic took the women’s long jump with 6.60m, and Kenyan steeplechase specialist Paul Kipsiele Koech, fresh from his victory at the IAAF Diamond League final in Zurich, was a comfortable winner of the men’s 5000m in 13:08.86.