Ukraine’s High Jump star Bohdan Bondarenko was in the spotlight at the 49th edition of the Palio della Quercia meeting in Rovereto, the oldest Italian meeting still in existence, held on a warm and sunny evening on Tuesday (3).

Bondarenko needed just two jumps, one at his opening height of 2.24m and then at 2.31m, to win in similar fashion to the way he came out on top at the IAAF Diamond League final Zurich last Thursday, where he cleared 2.28m and 2.33m at the first time of asking.

He then unsuccessfully tried twice at 2.36m, one centimetre more than the Palio della Quercia meeting record held by Bahamas’ Troy Kemp who cleared 2.35m back in 1991.

“I suffered from a little pain in my right leg. Without this problem, I think I could have jumped the meeting record. A few years ago, I would not have not thought that I could have achieved what I did this year. Italy is a special place for me. I won the silver medal at the European Youth Olympic meeting in Lignano Sabbiadoro. It was my first International medal. I like Italian people and Italian weather,” said Bondarenko appreciatively.

The other highlights of a highly entertaining meeting were three meeting records.

Ukraine’s Mariya Ryemyen, an IAAF World Championships finalist in Moscow and winner at the Diamond League meeting in Lausanne this year, set the 200m meeting record with 22.67, improving the previous mark by 0.02 set by Jamaica’s Beverly McDonald.

US sprinters Tiffany Townsend and Charonda Williams also dipped under the 23-seconds barrier with 22.77 and 22.85 respectively.

Another US sprinter, 400m specialist Natasha Hastings, who was fifth in the World Championships in Moscow, won the 200m B-race in 23.02.

The second meeting record was broken in the women’s 100m Hurdles where Russia’s 2013 World Championships finalist Yuliya Kondakova clocked 12.80 to improve the previous record of 12.87 set by the USA’s Yvette Lewis in 2011.

Bulgaria’s Georgi Ivanov broke the meeting record in the men’s Shot Put with 20.75m. He produced the best five puts of the evening. His complete series was 20.41m-20.45m-20.75m-20.24m-foul-20.43m and all his valid efforts would have been enough to win the competition ahead of Poland's Jakub Szyszkovski, who was second with 20.00m.

Symmonds still on song over 800m

Trinidad and Tobago's Keston Beldman was initially disqualified for a false start after he'd crossed the line in the 100m but was later reinstated and given the win in 10.04.

Cuba’s Omar Cisneros, who finished just out of the medals in fourth in Moscow, came from behind to pull away from Jamaica’s Leford Green in the final 50 metres to clock a solid 48.51 in the men’s 400m Hurdles. Green finished second in 48.86, edging out Great Britain’s Rhys Williams who also dipped under 49 seconds with 48.90 for third place

Ukraine’s Nataliya Lupu, seventh at the World Championships in Moscow, edged Russia’s Yekaterina Kupina in a tight finish in the women’s 800m to win in 1:59.92 to 1:59.99.

Ethiopian distance running star Muktar Edris, the World junior 5000m champion, dominated the men’s 5000m in 13:15.65 in the final race of the evening.

Cuba’s four-time World Championships medallist Yarelis Barrios, who added to her collection with the bronze in Moscow, dominated the women’s Discus with a best throw of 62.39m on her second attempt.

Matteo Galvan provided the sole home win of the night when he took the 400m in 45.55. 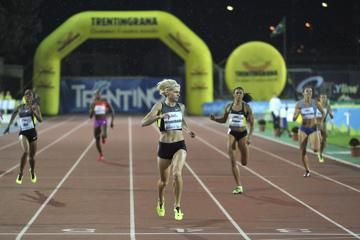 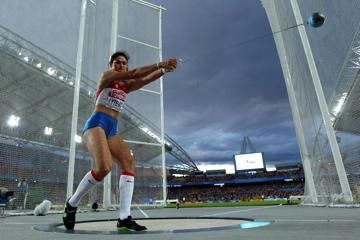