In the non-IAAF Diamond League event, Chespol moved to the front with 600 metres remaining and appeared poised for victory, but gasps went through the crowd as she stopped suddenly after emerging from the water to fix a loose shoe. The move cost her the best part of 20 metres, with both Jebet and Kenyan compatriot Beatrice Chepkoech taking an immediate advantage.

However, Chespol recovered it steadily over the following 300 metres, then powered away down the home straight to win in convincing style, taking seven seconds off her world U20 record of 9:05.70. Chepkoech came through strongly for second in 9:00.70, with Jebet third in 9:03.52.

Brittney Reese unleashed a world-leading 7.01m to take victory in the women’s long jump, the first of the IAAF Diamond League events on Friday's programme.

Reese reversed placings from the Olympic Games in Rio with gold medallist Tianna Bartoletta, whose second-round effort here of 6.83m would be her best but only prove good enough for second.

Reese, meanwhile, opened with a 6.88m to take command of the competition, but her second-round jump, the longest in the world this year, was the one which put her rivals out of sight.

“The goal was to come out and jump seven metres to see where my training was at and I feel like I’m in the right position,” she said. “I knew that kind of jump was coming.”

As important as it was for Reese to score a victory over Bartoletta, she wasn’t getting carried away with the win, aware that there are much more important competitions ahead this summer.

“We had a small rivalry over the last year but it was friendly competition,” said Reese. “Neither of us was expecting too much tonight. We wanted to go out there and put on a show for the crowd and we did. This year I want to get as close to a PR as possible and jumping seven metres on my second jump shows I’m in the right shape.”

Reese will next compete at the US Championships in Sacramento, which start on June 23.

In the women’s javelin, the second IAAF Diamond League event of the night, Belarus’s Tatsiana Khaladovich opened her campaign with a thunderous heave of the spear, sending it hurtling through the evening sky and landing in the grass a whopping 66.30m away, the third longest throw in the world this year and just four centimetres shy of her lifetime best.

In the end, that proved more than good enough to take the win and the maximum eight IAAF Diamond League points, and she proved it was no fluke with strong throws of 65.10m in the third round and 66.02m in the fourth.

Her closest challenger was China’s Liu Shiying, who launched a best of 65.21m in the third round, but withdrew from the competition after fouling her fourth-round effort. Croatia’s Sara Kolak, the Olympic champion, proved she is likely to remain a force in 2017 with a decent effort of 64.64m in the third round, good enough for third place.

World record-holder Barbora Spotakova started in disappointing fashion, managing just 54.38m and 59.74m on her first two throws, but the Czech athlete got it together in the final round, her throw of 63.30m placing her in fourth.

Dibaba had been on the hunt for the world record of 14:11.15, held by her sister Tirunesh, but after passing 3000m in 8:39.21, the wheels slowly began to fall off. Nonetheless, she fought to the finish to clock the second-fastest time in the world this year. 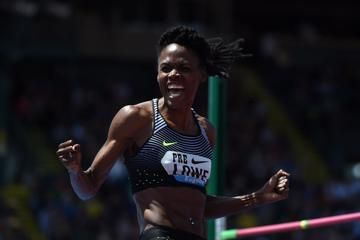