Kaya and Krizsan among early winners at European Under-23 Championships

Ali Kaya on his way to gold in the 10,000m at the European Under-23 Championships in Tallinn (© Getty Images)

The first medal of the 2015 European Under-23 Championships went to Ali Kaya of Turkey, who wasted no time stamping his authority of the men’s 10,000m final on the first night of competition in Tallinn on Thursday (9).

Passing through the first kilometre in a blistering 2:40, Kaya was well clear of the chasing pack and had his eyes firmly fixed on the championship record. Although his pace dropped in the second half, he still achieved his goal and stopped the clock at 27:53.38, surpassing the old mark by more than 30 seconds.

She returned on the second day of the competition with the championship record of 6396 points, held by Aiga Grabuste since 2009, firmly in her sights. It wasn’t to be though as despite a season’s best in both the javelin (49.78m) and the 800m (2:13.28), she came up just short. The 22-year-old will now focus on her senior global championships debut at the IAAF World Championships in Beijing.

There was German delight in the women’s 100m as Rebekka Haase and Alexandra Burghardt took a terrific 1-2 ahead of France’s Stella Akakpo. Haase’s winning time of 11.47 was somewhat slower than her impressive 11.25 qualification time, but it was enough to hold off her compatriot and Akakpo, who were separated by just 0.01, running 11.54 and 11.55. Friends and room-mates, the German duo were speechless post-race, the emotion clearly too much for them.

There was more German success in the men’s long jump, as Fabian Heinle produced an 8.14m leap to take gold. Czech Republic’s Radek Juska produced an 8.00m jump in round two for silver, while Bachana Khorava of Georgia and Benjamin Gfohler of Switzerland set national under-23 records of 7.97m and 7.93m respectively in third and fourth.

The women’s pole vault gave the large Swedish team at these championships something to celebrate, as Angelica Bengtsson took gold ahead of Michaela Meijer. It was a great competition, as Bengtsson cleared 4.50m and 4.55m first time, forcing Meijer, who failed her first attempt at 4.55m, to pass and attempt 4.60m which proved one step too far.

The final event of the second evening of action had Italians jumping for joy in the stands as Giovanni Galbieri took a popular 10.33 100m victory, holding off Denis Dimitrov in the final stages by just one tenth of a second.

Qualifying suggested the final would be a close affair, but few predicted it would be as close as it turned out. Like in the women’s race, bronze went to France, with Guy-Elphege Anouman crossing the line in 10.39.

Britain claimed their first medal of the championships as pre-competition favourite Nick Miller took gold in the men’s hammer. On a lovely summer evening the Brit produced a 74.46m effort in the second round, which was enough to see him take victory ahead of silver and bronze medallists Valeriy Pronkin and Bence Pasztor, although just 40 centimetres separated the top three.

The second long throw of the evening was also a close competition, but victory in the men’s discus went to Alin Alexandru Firfirica of Romania, who, like Miller in the hammer, wrapped it up with a second-round effort of 60.64m. Silver went to Wojciech Praczyk of Poland while Hungary’s Robert Szikszai produced a final-round throw of 58.82m to elevate himself into a medal-winning position.

Like in the men’s 10,000m, pre-race favourite Jip Vastenburg of the Netherlands took up the early running in the women’s final. Boasting a personal best a whole minute quicker than anyone else in the field, Vastenburg passed 5000m in 16:15 and already the lead group was down to three.

One of those was European under-23 cross-country champion Rhona Auckland of Great Britain and with six laps to go the Brit took the lead and did her best to force the pace. She couldn’t shake off the tall Dutch woman though, who eventually sprinted away to gold in the final 200m, clocking 32:18.69.

Taking place in front of the main stand, which was nearly at capacity, the women’s triple jump really got the crowd going as European under-23 leader Dovile Dzindzaletaite hopped, stepped and jumped to 13.94m with her first attempt.

Extending her lead in round two with 14.23m, the tenacious jumper was slightly disappointed that the 2.1m/s wind had denied her a personal best. Fast forward two rounds and she replicated that mark but with a legal wind (1.9m/s) to break her own national record and produce the best mark by a European under-23 athlete this year.

Romania’s Elena Andreea Panturoiu threatened to put her under pressure with a 14.13m personal best in the second round, but she couldn’t go any farther, so gold was Dzindzaletaite’s.

Taking centre stage as the first day of competition came to a close, the women’s shot put final provided quite a spectacle, the medals changing hands as late as the penultimate throw.

Heading into the final round it looked as though Shanice Craft of Germany was going to take gold, with her team-mate and former heptathlete Sara Gambetta bronze, but sandwiched between the pair, Viktoryia Kolb had other ideas. Trailing Craft by 17 centimetres, the Belarusian produced a European under-23-leading throw of 17.47m with her final attempt to snatch gold. Craft will now go for a second medal in the discus.

Russia dominated the race walks as they so often do, with Nikolay Markov taking a comfortable victory in the men’s race in 1:23:49, while Mariya Ponomaryova broke the championship record with a 1:27:17 performance to take gold by just eight seconds in the women’s race from world junior champion Anezka Drahotova.

BACK
Pages related to this articleAthletes
Angelica BENGTSSON 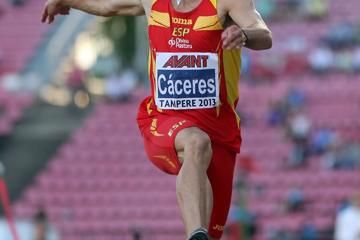 Caceres, Trost and Terzic help light up the E...