Five world-leading marks topped by Tyson Gay’s 100m in 9.86 and Ryan Whiting’s 21.74m Shot Put  were just a few of the highlights of an enthralling Jamaica International Invitational meeting, an IAAF World Challenge event, in Kingston on Saturday (4).

Gay showed that he is well on track to challenge the absent and injured local stars Usain Bolt and Yohan Blake when the American scorched down the track for the year’s first sub-10 time, with just the mildest of help from a 0.2 metres-per-second breeze on his back.

“I didn’t get the best start, but the track helped me to pull myself back with a good time. I’m getting back to full fitness, but I am being very patient with it,” commented Gay, noting how quick Kingston’s National Stadium track was

“I am feeling good, the best I have being in a long while,” he added.

Jamaica’s Nesta Carter was a distant second in 10.03 while US sprinter Darvis Patton was third in 10.07.

Whiting was the dominant shot putter indoors this winter, going unbeaten in five meeting. However, that streak came to an end last weekend at the Drake Relays when he was beaten by Reese Hoffa but the 2012 World indoor champion bounced back to send his implement out to a world-leading 21.74m. USA’s 2009 World Championships gold medallist Christian Cantwell was second with 20.29m.

The women’s 100m duel between Jamaica’s Veronica Campbell-Brown and US visitor Allyson Felix had been billed as one of the top races at the meeting and the former certainly played her part when winning in 11.01 after a strong second half of the race, and despite a sluggish start.

“I am pleased with the time I ran tonight after a shaky start. I need to be a little more alert because I felt I was sleeping somewhat (in the blocks), but it’s my first 100m, and I’m glad I got it out of the way,” reflected Campbell-Brown.

Felix was not so sharp, perhaps focusing more in training on her 400m outing at the IAAF Diamond League meeting in Doha on Friday, and could only finish back in fifth place in 11.13.

world-leading times in the Hurdles

The two other world-leading times came in the sprint hurdles races with Dawn Harper-Nelson beating her American colleague Queen Harrison in a thrilling battle over the barriers in the women’s 100m Hurdles, the pair clocking 12.62 and 12.64 respectively.

The men’s 110m Hurdles was equally exciting with just 0.03 covering the first three men home with the USA’s 2002 World Junior Championships winner Antwon Hicks relishing his return to the track where he won his gold medal 11 years ago and prevailing in 13.25.

He just edged out local star and 2012 Olympic Games bronze medallist Hansle Parchment, who was second in 13.26 and another Jamaican, Andrew Riley, was third in 13.28

There were also two outstanding 200m races with Jamaica’s 2012 Diamond Race winner Nickel Ashmeade taking the plaudits with a world-leading time of 20.00 while running into a very slight breeze. He comfortably beat his compatriot and London 2012 Olympic Games bronze medallist Warren Weir, who was second in 20.14, while USA’s Wallace Spearmon was third in 20.32.

““I felt good. I came in to get a good time, and I ended it injury free, so I am have to give thanks,” said Ashmeade.

Jamaica’s two-time Olympic Games 100m champion Shelly-Ann Fraser-Pryce is also quick over 200m and she proved that point again with a sparkling run in 22.38, the fifth fastest race of her career and the second fastest time of the year.

Her regular rival Kerron Stewart was second with 22.71 while Sherone Simpson just beat out Samantha Henry -Robinson for third place although both women were given the same time of 22.83.

Jamaica’s Stephanie McPherson showed that she could be a medal threat over one lap of the track at this summer’s IAAF World Championships in Moscow when she improved her personal best to 50.43 and came in ahead of Great Britain’s former Olympic champion and 2012 silver medallist Christine Ohuruogu, who was second again on this occasion in 50.58.

Dominican Republic’s 2012 Olympic Games 400m silver medallist Luguelin Santos triumphed in his specialist event in 45.06 with there was a three-way battle in the men’s 400m Hurdles with the American pair of Justin Gaymon and two-time former World champion Kerron Clement both timed at 49.23 but the verdict went to Gaymon. Trinidad and Tobago’s Jehue Gordon was third in 49.26.

USA’s T’erea Brown was a good winner in the women’s 400m Hurdles, crossing the line almost a second ahead of her nearest rival in 54.83m.

There were useful wins in the men’s field events for Jamaican long jumper Nicolas Gordon with 7.80m and Indian discus thrower Vikas Gowda with 61.38m. In the women’s field events, Jamaica’s Kimberly Williams won the Triple Jump with 14.00m and USA’s Gia Lewis-Smallwood took the Discus with 62.41m.

Phil Minshull and Anthony Foster for the IAAF 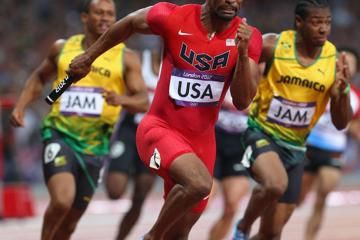