National records for Rollins, Carter and Bingson at US Championships

Brianna Rollins still doesn’t know how fast she can run in the women’s 100m Hurdles.

Rollins continued her rapid ascent on the world all-time lists with a North American record of 12.26 at the US Championships at Drake Stadium in Des Moines, Iowa on Saturday (22 June).

Rollins’ mark, aided by a 1.2m/s tailwind, smashed the American record of 12.33 set by Gail Devers in 2000. It was her first competition as a professional after relinquishing her final season of collegiate eligibility at Clemson.

It pushed the 21-year-old into a share of third place on the world all-time performer list, tied with Ludmila Engquist with only Ginka Zagorcheva and World record-holder Yordanka Donkova (twice) ever having run quicker.

It was also a US all-comers’ record and a world under-23 best. The last time someone ran faster was back in 1988.

Queen Harrison, a 2008 Olympian in the 400m Hurdles, placed second in 12.43 to move to equal sixth on the US all-time list. Nia Ali, the 2011 NCAA champion, was third in a PB 12.48 for the final spot on the US team for the IAAF World Championships in Moscow.

Rollins’ US record capped a warm and breezy afternoon that featured three American women’s records with Michelle Carter in the Shot Put (20.24m) and Amanda Bingson in the Hammer (75.73m). In addition to Rollins, world-leading marks were posted by Michael Tinsley in the 400m Hurdles (47.96) and Brigetta Barrett in the women’s High Jump (2.04m).

Earlier on Saturday, Rollins ran a wind-aided 12.30 (2.8m/s) in the semifinals, following a windy 12.33 (2.3m/s) in the first round on Friday. At the NCAA Championships two weeks ago, Rollins twice broke the collegiate record, topped by a 12.39 run in the final.

Under any conditions, Rollins – who started the season with a PB of 12.70 – now holds the top four times in the world this season.

“My training and dedication to the sport has helped out,” said Rollins. “I never think about times and records. I just come out here and do what I have to do.”

Rollins got out of the blocks even with Lolo Jones but was the quickest to the opening barrier. Rollins steadily pulled away for the victory with Jones fading to fifth after hitting the last hurdle with her lead leg.

Rollins was unaware of the significance of her performance until looking at her time on the scoreboard when it was announced as an American record.

“I was so overwhelmed and emotional. I was just so happy to make the (US) team for the first time ever,” Rollins said.

Breakthrough throws for Carter and Bingson

In the Shot Put, Carter led from the first round before unleashing a 20.24m effort on her fifth throw – an improvement of 38cm over her lifetime best of 19.86m from the 2012 US Olympic Trials. The effort surpassed the American record shared by Ramona Pagel (1988) and Jillian Camarena-Williams (2011).

Tia Brooks placed second with 18.83m and Alyssa Hasslen was third with 18.10m.

In the Hammer, Bingson twice broke the US record of 74.19m held by Jessica Cosby. Bingson threw 74.92m in the second round and improved to 75.73m on her next throw. Bingson, a 2012 Olympian, smashed her previous best of 72.95m set in May by almost three metres.

Barrett won the women’s High Jump with a world-leading and personal best 2.04m in her first competition since winning her sixth overall NCAA title two weeks ago. Barrett’s clearance was the best by an American since Chaunte Lowe jumped an American record of 2.05m at the 2011 US Championships, also contested in Des Moines.

Reigning World and Olympic champion Brittney Reese fouled on all three preliminary jumps but will advance to Moscow with a bye as the defending World champion.

Merritt sends message to James in the 400m

LaShawn Merritt won the 400m in a season’s best of 44.21 with World and Olympic champion Kirani James in attendance at the meet as a spectator. Tony McQuay, who ran on the US Olympic silver medal-winning 4x400m Relay team in London, was second in 44.74 and 2011 World youth champion Arman Hall was third in 45.01.

In the women’s 400m, Natasha Hastings held off Francena McCorory, 49.94 to 50.01. World junior champion Ashley Spencer grabbed third in 50.58. Olympic champion Sanya Richards-Ross, who had only one meeting before the US Championships after surgery on her big toe, finished sixth in 51.92 running with training flats.

Matthew Centrowitz and Treniere Moser won tactical 1500m finals. World bronze medallist Centrowitz won the men’s race in 3:45.17. Moser won the women’s race in 4:28.62 with 17-year-old training partner Mary Cain placing second in 4:28.76 to earn a spot on the US team. Both runners ran under 58 seconds on the final lap.

World record-holder and Olympic champion Ashton Eaton overcame a 44-point first-day deficit to Gunnar Nixon to win the Decathlon with 8291, his first points earned in the 2013 IAAF Combined Events Challenge.

Nixon finished second with 8198 points – two shy of the World Championships ‘A’ standard, but he will likely be on the team as only two other US athletes, Eaton and Jeremy Taiwo, have the ‘A’ standard, aside from defending World champion Trey Hardee.

Carter out of 400m Hurdles

World-leader Kori Carter did not start in the women’s 400m semifinals. Carter ran in the first round of her first race after turning pro after winning the NCAA Championships in 53.21. Carter, who is managed by Wes Felix – the brother of Alyson Felix – had been in quandary over a conflict with the World Championships and her position as a bridesmaid at her sister Kelly’s wedding.

In Carter’s absence, London Olympic finalist Georgeanne Moline, who had lost to Carter in all five races this season, was the top qualifier at 54.82. Dalilah Muhammad, who trains under Yolanda Demus – the mother of Lashinda Demus – won the other semifinal in at 54.83.

BACK
Pages related to this articleAthletes
Michael Tinsley 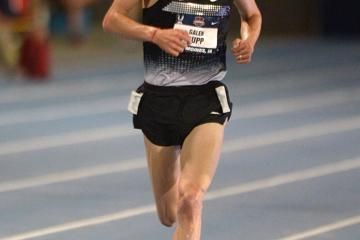 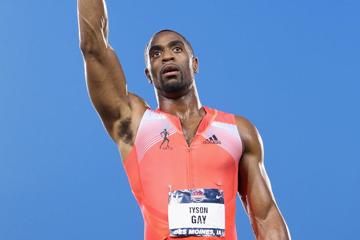