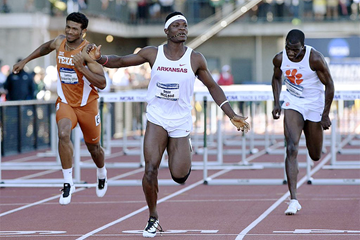 McLeod defies the rain to run 13.08 at Drake Relays

Jamaica’s Omar McLeod defied the elements to run a world-leading 13.08 in the 110m hurdles at the Drake Relays in Des Moines, USA, on Saturday (30).

McLeod, who won the world indoor 60m hurdles gold medal last month, came home a clear winner ahead of 2013 world champion David Oliver and fellow Jamaican Hansle Parchment, who were second and third in 13.31 and 13.42 respectively.

McLeod’s run was the second-fastest of his career, behind only the 12.97 he ran to win the Jamaican title last summer.

Olympic champion and world record-holder Aries Merritt finished fifth in 13.61 after hitting a hurdle in the second half of the race.

Keni Harrison was equally impressive in the women’s 100m hurdles, flying down the rain-soaked track to take the victory in 12.56 ahead of fellow US sprint hurdler Kristi Castlin, who ran 12.62 for second place.

Harrison’s time was the second-fastest performance in the world this year, only behind the 12.36 she ran to win in Athens, Georgia, earlier this month.

Levern Spencer of Saint Lucia cleared 1.95m to win the women’s high jump, a competition that was moved indoors due to the constant rain on the outdoor track. In the unusual circumstances, her performance actually equalled her national indoor record.

Spencer had a 10-centimetre winning margin over the USA's world indoor champion Vashti Cunningham and Maya Pressley, who tied for second, with both athletes clearing 1.85m on their first attempt but failing three times at 1.90m.

Sandi Morris was impressive when taking victory in the women’s pole vault, recording a perfect series up to and including her winning height of 4.70m, before having three failures at 5.04m. Greece’s Ekaterini Stefanidi finished second with a best of 4.60m.

Chris Benard coped best with a damp runway in the men's triple jump, taking victory with his fourth-round effort of 16.87m.