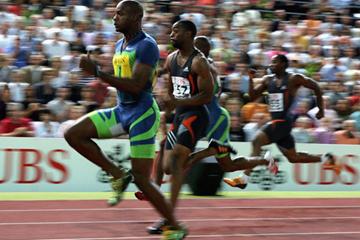 Asafa Powell lived up to the promise he made yesterday, that he wanted to do “something special” to help remember the final evening that Zurich’s Weltklasse IAAF Golden League meeting would be held in Letzigrund Stadium. And he delivered on that pledge, equalling yet again the 9.77 World record in the 100 metres.

“I guess I’ll just have to dip when I get to the finish line,” the 23-year-old Jamaican said, smiling. “It was a great race. I knew it was something special, but I didn’t think it was that fast.”

It was an unprecendented third time that Powell has stopped the clock at 9.77. The first was on 14 June of last year at the Olympic Stadium in Athens, before he equalled the feat on 11 June of this year in Gateshead, England, just one month after American Justin Gatlin equalled the mark in Doha, Qatar.

“I ran the World record three times,” Powell said, gleaming as he quickly thought about his achievement. “Nobody’s done that before.”

But he wasn’t absolutely alone as he crossed the line. American Tyson Gay, who continues to get faster, ran solidly through the line en route to a new personal best of 9.84, to become the season’s third fastest sprinter, just behind the co-world record holders. A distant third was Leonard Scott, the World indoor 60 metres champion, with a season’s best 9.97, with Marcus Brunson fourth in 9.99, his first sub-10.

Powell’s victory may have been the highlight, but along with the Jamaican sprinter, all four athletes who began the evening in the hunt for a perfect six-for-six record in Golden League meetings survived to continue the chase for a piece of the $1 million pie next weekend in Brussels.

Tirunesh Dibaba set the tone for the four remaining contestants with a clear win in the 5000 metres. While her Ethiopian compatriot Mestawat Tufa reached the bell first, behind her Dibaba simply did what she does best: shift gears and begin her extended kick to the finish. Berhane Adere was in pursuit down the backstraight, but the race was all but secure for Dibaba as she reached the homestretch, eventually crossing the line in 14:45.73. Some 70 metres from the finish, Kenyan record holder Edith Masai passed Adere to take second (14:48.22), nearly a second ahead of Adere (14:49.03).

Richards, Wariner chased to the line

The other two left in the hunt, American 400 metre stars Sanya Richards and Jeremy Wariner, both ran to victory as well, but in both instances the races were much closer than expected.

In the women’s contest, Richards went out very fast – perhaps too fast? – and appeared to pay for it as she approached the final straight, with Bulgaria’s European champion Vanya Stambolova and Jamaican Novlene Williams giving chase. It wasn’t until the final 20 metres that Richards was able to shake the attack, reaching the finish in 50.18. Stambolova hung on for second (50.58) with Williams third in 50.58.

“It was a very tough race,” said Richards, now undefeated in nine races over the distance this year. “I’m not very excited about the time.”

In the men’s race, Wariner was off to his usual strong first half, but was shadowed closely my compatriot Lashawn Merritt, who apparently took his spoiler’s role very seriously. Wariner reached the straight first, but Merritt was still with him and didn’t relent as the pair approached the finish. Wariner maintained his edge to win in 44.20, with Merritt’s effort rewarded with a 44.34 personal best. African Champion Gary Kikaya closed well to finish third (44.54).

With about 200 metres remaining in the men’s 5000, it appeared that the Oslo finish, where Isaac Songok ran down Kenenisa Bekele, would be duplicated. With Bekele leading, the younger Songok looked to be biding his time, again ready for the final homestretch pounce. But it didn’t happen. Perhaps weary from the mid-race laps that Bekele chose to control, the Kenyan couldn’t muster the closing charge he displayed in the Norwegian capital two months ago. Again, Bekele reigned supreme, reaching the finish in 12:48.25, a world leading performance. Songok lowered his personal best to 12:48.66 for second, with Eliud Kipchoge, who ran with the duo until the final lap, fading over the final 300 metres to finish third in 12:57.69.

The rest of the field was well back throughout the race, with Jonas Cheruiyot leading the pack in fourth (13:04.91).

Panama's Irving Saladino extended his drive for five wins by the narrowest of margins, fighting back the challenge of Saudi Mohamed Al-Khuwaldi by just two centimeters. Italy’s European champion Andrew Howe took the lead in the first round with an 8.18 leap, but was overtaken by World and Olympic champion Dwight Phillips in the second, when he reached 8.25. Saladino’s best effort came in round four when he broke the sand with an 8.36 leap, barely topping the Saudi’s 8.34 from the same round.

Vlasic, Kallur and Thorkildsen knocked out of the hunt

Blanka Vlasic knew that her task to continue the Jackpot chase was a difficult one, and in the end barely played a role, topping out at just 1.97 and making her exit at two metres. Swede Kajsa Bergqvist looked strongest in the early rounds, missing just once through 2.02, a height she cleared on her first try and ultimately the highest she would reach. It took Venelina Veneva three tries to negotiate that height, but she stunned Bergqvist with a first attempt clearance at 2.04, to defeat the Swede for the second straight competition.

Interestingly, the Bulgarian veteran asked that the bar be raised to a world record height, but not 2.10 to add a centimetre to her compatriot’s Stefka Kostadinova’s 2.09 set in 1987. Instead she made three attempts at 2.11, none of them particularly close.

Perhaps weary from her emotional victory in Gothenburg last week, European champion Susanna Kallur’s race to remain in the Jackpot chase was clearly over by hurdle five. By then, World champion Michelle Perry had already built a visible lead, with only Jamaican Brigitte Foster and American Damu Cherry giving chase. Perry won decisively in 12.65, well ahead of Foster’s 12.80, with Cherry third (12.83). In the lean, Kallur was edged by Germany’s Kirsten Bolm, 12.85 to 12.86.

“I’m excited that I ran as well as I did today,” said Perry, who missed some come early season competitions due to a hamstring strain. “I’m only getting better now towards the end of the season.”

It didn’t take long for Tero Pitkamaki to bring Olympic champion Andreas Thorkildsen’s Jackpot chase in the Javelin Throw to an end. With his second round 88.27 throw, the Finn, who finished second to the Norwegian last week at the European Championships, easily put the competition well out of reach. Thorkildsen’s best response was a 85.12 effort in the following round, a results that was ultimately good enough for second. Vadims Vasilevskis of Latvia was the best of the rest on a sub-par night, his 82.50 best enough for third.

On a night that would close with a celebration and look back at this hallowed athletics shrine, it was perhaps fitting that it was Allen Johnson who brought the meeting to life with his sterling victory in the 110 metre Hurldes.

Johnson, who had won in Letzigrund on six previous occasions, showed his class again with a solid 13.13 victory, well ahead of this year’s Cuban revelation Dayron Robles, who crossed the line in 13.20.

“I really need that win for a lot of reasons,” said Johnson, who has raced just once since a sore hamstring knocked him out of June’s U.S. championships in the semi-finals. “I was really, really happy with that win.” His enthusiasm, almost likened to an adolescent’s as he crossed the line, was infectious, stirring the crowd.

American Aries Merritt was third in 13.28, with none others managing to dip under 13.30.

The full-lap event produced a major upset, with Greek Periklis Iakovakis riding his momentum from his recent European title to a 47.92 victory here.

“This was different from the championships because there I was focused on victory,” Iakovakis said. “Here I didn’t feel the same pressure and was able to relax.”

The Greek powered down the backstretch to bring a solid lead into the final turn and into the final straight. Though he faded somewhat over the final few strides his margin was substantial enough to hold off Louis van Zyl of South Africa (48.09) and World champoin Bershawn Jackson, who was well back in 48.49. In his first major international outing since his injury last year, Olympic Champion Felix Sanchez clocked 49.72, a season’s best, but only good enough for eighth.

Double world leader Sherone Simpson made her case as the year’s top sprinter even stronger with a dominating 11.09 victory in the women’s 100 metres. With a clear lead 50 metres into the race, the rest of the field was relegated to a battle for second. That one was won by World indoor champion Me’Lisa Barber (11.25), just ahead of fellow American Stephanie Durst (11.27).

Saif Saaeed Shaheen fell a little short on his assault on his own World Record, but he did yet again display his absolute dominance of the event.

With the clock reading 6:54 as he passed the bell, Shaheen was already more than a full straight of the track ahead of the chase pack, but more than two seconds behind the world record pace. He reached the finish in 7:56.54, a meet record, but just under his 7.56.32 world leader from Athens.

With about 40 metres remaining in the 800 metres, Wilfred Bungei appeared to have his third straight Zurich title locked up. But Mbulaeni Mulaudzi had other ideas as he powered past the Kenyan en route to a fast 1:43.38 victory. Dutchman Bram Som, still riding high from his victory in Gothenburg, cruised by the fading Bungei over the final few meters to finish second in 1:43.45, a Dutch national record. Bungei held on for third (1:43.67) with world leader Amine Lalou of Morocco fourth (1:43.91). Olympic champion Yuriy Borzakovskiy, last at the bell, made little headway over the final straight, and finished eighth (1:45.94) in the mine-man field.

Olga Kotlyarova followed up her European title run admirably as she sneaked by the leaders on the inside over the final 50 metres to win the 800 in 1:58.69. In a strong homestretch run reminiscent of her silver medal performance at the Athens Olympic Games, Morocco’s Hasna Benhassi closed with a flourish to take second in 1:58.71, with defending Zurich winner Zulia Calatayud third in 1:59.44. African champion and world leader Janeth Jepkosgei, who controlled the race briefly midway through the second lap, faded to fourth (1:59.65).

Bernard Lagat led Alex Kipchirchir at the bell in the 1500, but neither could match the closing drive of Augustine Choge who swept by Kipchirchir down the homestretch to a 3:32.72 personal best. In a blanket finish, Kipchirchir hung on for second (3:33.85),  ahead of Daniel Kipchirchir Komen (3:33.89) and Algerian tarek Boukensa (3:33.95). fading badly down the final straight, Lagat, who won here in 2004, was a distant seventh.

Virgilijus Alekna took command of the proceedings in the Discus Throw with a 68.51 effort in the third round, but the Lithuanian got a scare in the final round when Gerd Kanter reached 68.41, to finish just 10 centimetres shy of Alekna and to repeat their finish from the European Championships. His victory extended his win streak to 20 consecutive finals.

Elsewhere on the infield, Christian Olsson followed up his European title with a narrow victory over Brazilian Gregorio Jadel, 17.39 to 17.35, while Brad Walker, the year’s only 6 metre jumper, won the Pole Vault on the countback over Australians Paul Burgess and Steven Hooker, each clearing 5.85.

William Yiampoy took over when pacesetter Vincent Mumo concluded his chores en route to a decisive victory in the 800 B race in 1:44.12, well ahead of Canadian record holder Gary Reed, who was second in 1:44.77.

Jamaican Danny McFarlane won the B Race of the 400 hurdles in 48.73, just ahead of Adam Kunkel’s whose fast closing effort was rewarded with a 48.77 Canadian national record, his fourth of the year.

The evening was capped with an entertaining look back at just some of the many memorable moments that Letzigrund Stadium has given the athletics world, with several legendary athletes on hand to share in the celebration.