100 ones to watch in Tokyo: race walks

Ones to watch in Tokyo - race walks

As the countdown to the Tokyo Olympics continues, we conclude our series highlighting 100 ones to watch in the lead-up to the Games.

Some are known athletics stars, some are gold medal favourites, others will be outsiders. But they all have fascinating stories that are worth a read as the Games draw ever closer.

Every 10 days we have profiled 10 new athletes, each time focusing on a different area of the sport. So far we have looked at the sprints, middle-distance, long distance, hurdles and steeplechase, vertical jumps, horizontal jumps, short throws, long throws and combined events.

For the final instalment in the series, now it’s the turn of the race walks. 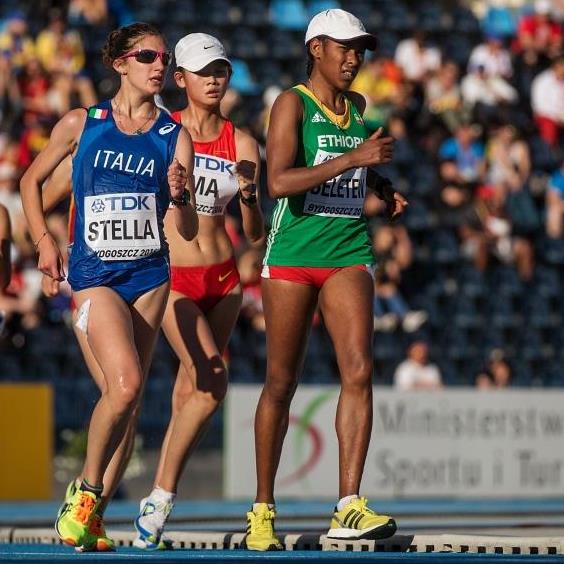 Five years after competing at the Rio Olympics as an 18-year-old, Ethiopia’s Beletew heads to Tokyo as third fastest on the African all-time list, behind only Kenya’s Grace Wanjiru Njue and Emily Wamusyi Ngii. That is thanks to a PB of 1:31:32 Beletew set in Alytus, Lithuania, in June.

Beletew’s Olympic debut ended in a disqualification but just the month before, aged 17, she had claimed world U20 10,000m race walk bronze in Bydgoszcz, setting an African U20 record with her time of 45:33.69. She then represented her nation at the World Athletics Championships in London in 2017 and Doha in 2019, finishing 16th at the latter aged just 21. This year, as well as her runner-up finish in Alytus, Beletew won the 10,000m race walk at the Ethiopian Championships, held at altitude in Addis Abeba, where she clocked 44:49.0. 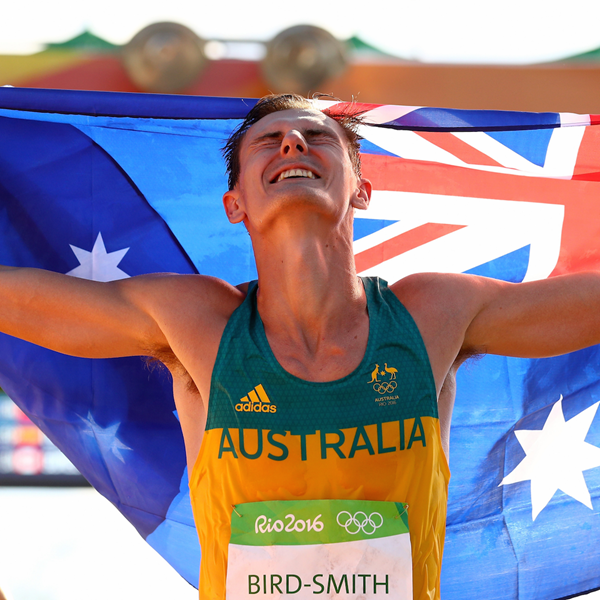 While sprinting formed part of Bird-Smith’s early athletics career, he soon followed in the footsteps of his father – Dave Smith – and focused on race walking. Smith had helped to pave the way for race walking in Australia and competed at the inaugural World Athletics Championships in 1983 before the Olympics in Moscow in 1980, which is the same city in which Bird-Smith made his senior global debut at the World Championships 33 years later. There Bird-Smith placed 10th and after the disappointment of missing the London Games in 2012 he made his Olympic debut in Rio, claiming bronze. Two years later he won Commonwealth gold on home soil.

Having shared his own experiences, Bird-Smith is an advocate for mental health awareness and has spoken about the importance of his support network. “Post-Rio I found this period tricky. After receiving the respect and kudos of winning a bronze medal, I found it hard to revaluate my goals,” he said in 2018. “I spent a few months figuring out whether I wanted to pursue the Olympic dream for the 2020 Tokyo Games. My wife and family offered great support.” 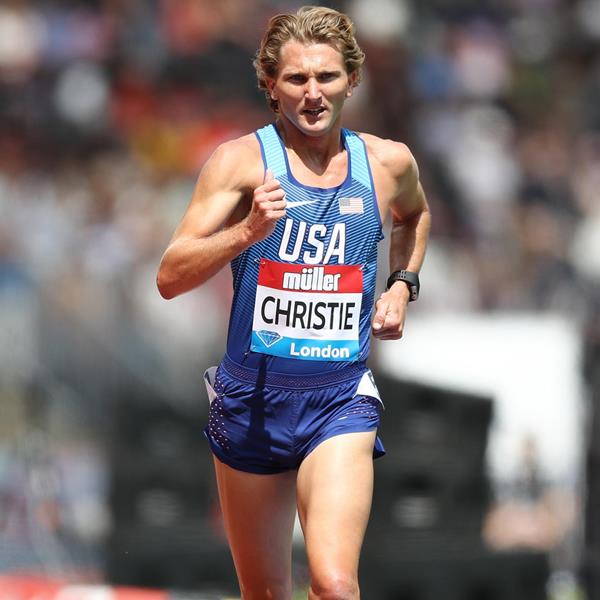 It had looked as though Christie’s Olympic dream was narrowly out of reach, with his position on the world rankings putting him just outside the 60-athlete quota. But then he got a last-minute call when a place within the quota opened up.

It had already been a rollercoaster of a year for the multiple US champion, whose father sadly passed away in April. "I have not dealt with his passing well at all," Christie said in a recent Instagram post. "He wanted to watch my 50km back in February and I told him no because spectators weren't allowed. I didn't know that would be the last race I'd ever be able to have him at. Making the team gives it all meaning."

Previously a decathlete and hurdler, Christie will be joined in Sapporo by his girlfriend Robyn Stevens, who will contest the women’s 20km race walk. 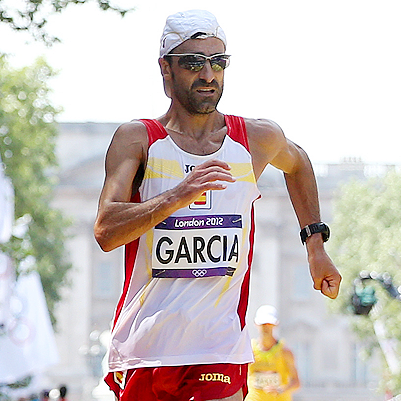 There’s no other way to describe him – Garcia is a race walking legend. Having made his Olympic debut in 1992, finishing 10th, the now 51-year-old has not missed an Olympics since. Tokyo will be his eighth, which is a record number of Olympic appearances for a track and field athlete.

After winning the world 50km race walk title in 1993, Garcia secured world silver in 1997, 2001 and 2009. He placed fifth at the 2004 Olympics and fourth at the 2008 Olympics, while he finished 20th at the Rio 2016 Games. Just three years ago, at the World Championships in Doha, he finished eighth. “I guess I’m the Peter Pan of race walking, eternally young,” he joked in 2014. “Perhaps one day I’ll wake up and realise that I’m old, but I haven’t yet. I love this sport, that’s what has kept me competing for more than 20 years, race walking and athletics in general is in my veins.” 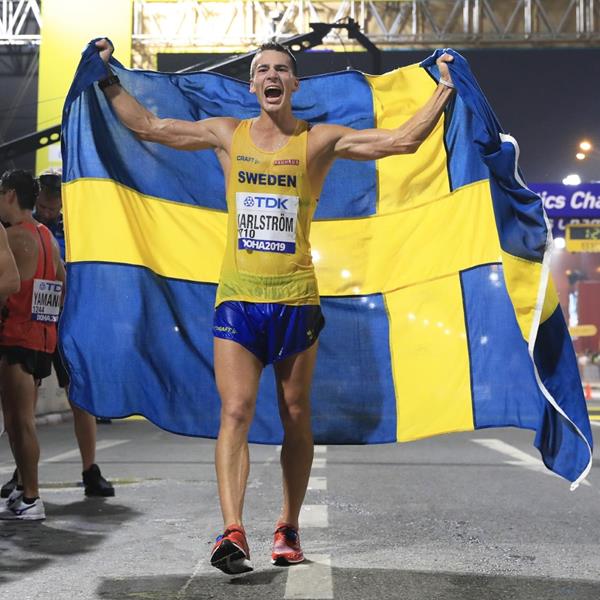 Similar to Bird-Smith, Karlstrom has kept up the family race walking tradition, with his parents Siv and Enrique both former race walkers. “The sport has been a part of me as long as I can remember,” he told Spikes. “At four or five, I was following my Mom on the bike as she was training. I did my first race walk at the age of seven.”

After winning his first European Race Walking Cup title in May 2019, the now 31-year-old went on to set his Swedish record of 1:18:07 in La Coruna and became a global medallist a few months later, clocking 1:27:00 in the heat of Doha to finish third behind Japan’s Toshikazu Yamanishi and authorised neutral athlete Vasiliy Mizinov. Coached by Australian Brent Vallance, who also guided 2012 Olympic 50km race walk champion Jared Tallent, Karlstrom retained his European Race Walking Cup title in May, when he was not far off his PB with 1:18:54. 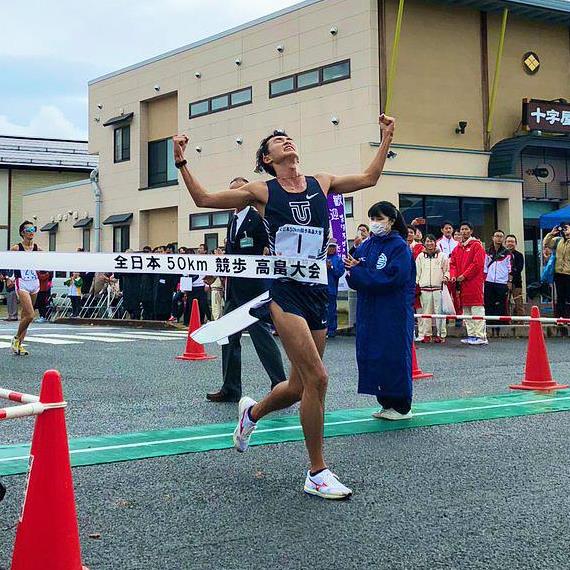 Kawano achieved his place on the host nation’s Olympic team by breaking the Japanese 50km race walk record with 3:36:45 to win in Takahata in 2019. With that mark, the now 22-year-old improved a record which had been set by world champion Yusuke Suzuki. It also moved him to 11th on the world all-time list and fourth on the Asian all-time rankings.

Making his international debut in 2016, Kawano finished ninth in the 10,000m race walk at the World U20 Championships in Bydgoszcz and then claimed Asian Race Walking Championships silver and World University Games silver in 2019, both in the 20km race walk. He made his 50km race walk debut in 2018, clocking 3:47:30, before his step up to become national record-holder the following year. 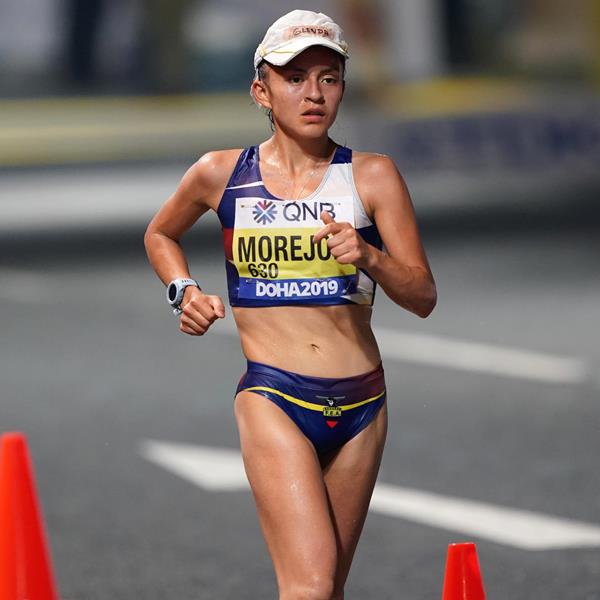 Morejon’s disappointment over her 25th place finish at the World Championships in Doha has helped to fuel her towards Tokyo. After claiming 5000m race walk gold at the World U18 Championships in Nairobi in 2017, where she won by just 0.49 for the closest ever race walk finish at the event, the now 21-year-old went on to claim 10,000m race walk bronze at the World U20 Championships the following year. Then, making her 20km race walk debut in La Coruna in June 2019, she surprised many of her more experienced rivals with a 1:25:29 victory – the fastest time ever achieved by an U20 athlete and a mark which puts her 16th on the world all-time list.

But she was unable to build on that when making her senior international debut in challenging conditions in Doha and after being named among the nominees for the Rising Star Award at that year’s World Athletics Awards, she said: “It's part of sport and it's a learning experience and a stepping stone. I have to remind myself that I'm only 19 years old and I have a long career ahead of me, so this is all part of gaining experience.” 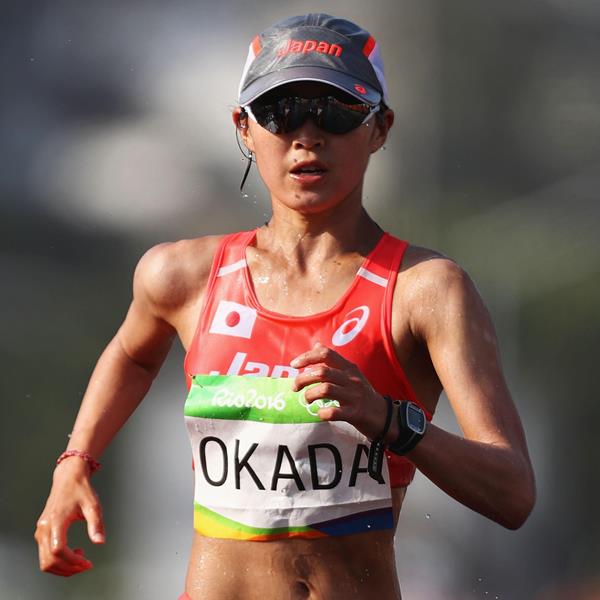 At the 2019 World Athletics Championships in Doha, Okada walked with her teammate Nanako Fujii in the second half of the race as they worked their way through the field and eventually finished sixth and seventh respectively. Both athletes are again on the team for the Olympics and will be hoping to secure further success on home soil in Sapporo.

Nine years before that senior competition, the now 29-year-old Okada had claimed 10,000m race walk silver at the World U20 Championships in Moncton and has gone on to capture five national titles as well as Asian Race Walking Championships and Asian Games medals. In 2021 she placed second at the Japanese Race Walking Championships and her national record of 1:27:41, set when finishing sixth behind Morejon in La Coruna in June 2019, puts her 16th on the Asian all-time list. 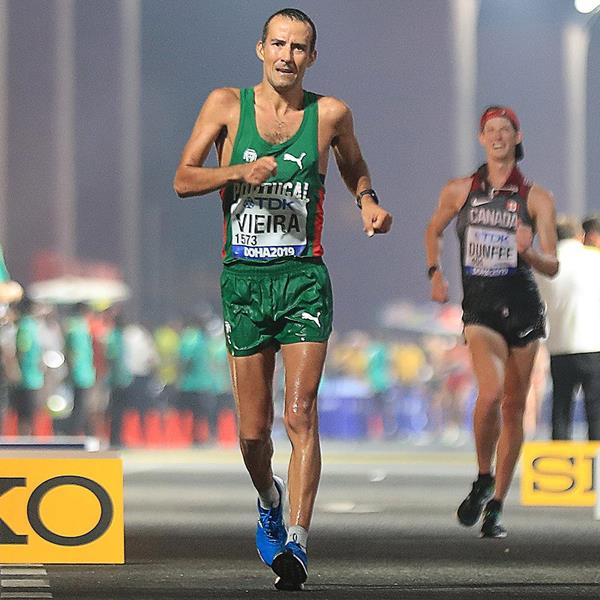 In Doha, at the age of 43, Portugal’s Vieira became the oldest ever medallist in World Athletics Championships history. Competing in his 11th successive World Championships, he used his experience to deal with the tough hot conditions and finish second behind Japan’s Yusuke Suzuki, clocking 4:04:59. “This is the best medal of my athletics career in the hardest race I have ever done across all of my 11 World Championships appearances,” Vieira said at the time. “Many people didn’t believe I could ever get this far, but I never stopped dreaming.” 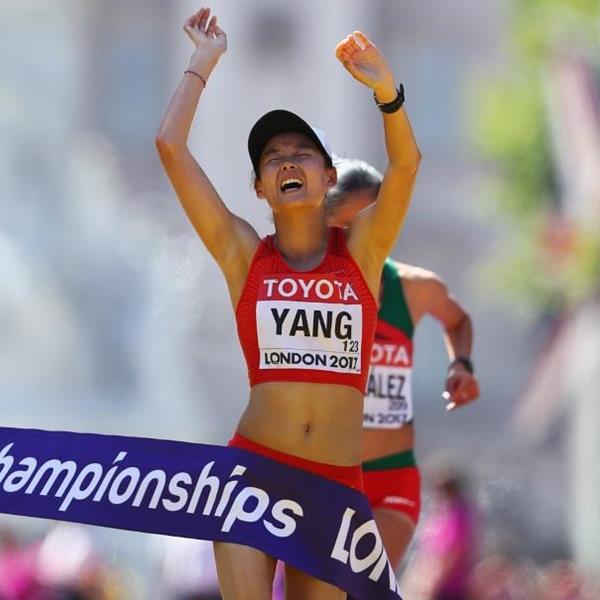 The 2017 world champion became the fastest ever in the history of the women’s 20km race walk earlier this year, clocking 1:23:49 at the Chinese Race Walking Championships in Huangshan in March. That took 49 seconds off the previous world record of 1:24:38 set by her compatriot Liu Hong, the Olympic champion, in La Coruna in 2015.

The 25-year-old’s 2017 world title had been won in dramatic style as her compatriot and race leader Lyu Xiuzhi was disqualified in the final 100 metres, leaving the way clear for Yang to triumph. Prior to that, she had claimed U20 10,000m race walk silver at the 2014 World Race Walking Cup and went on to win 20km race walk bronze in 2018 as well as Asian Games gold that year, with the Tokyo Games being her debut Olympics. 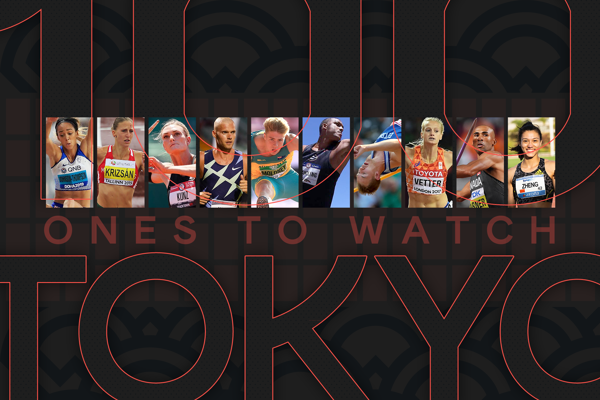 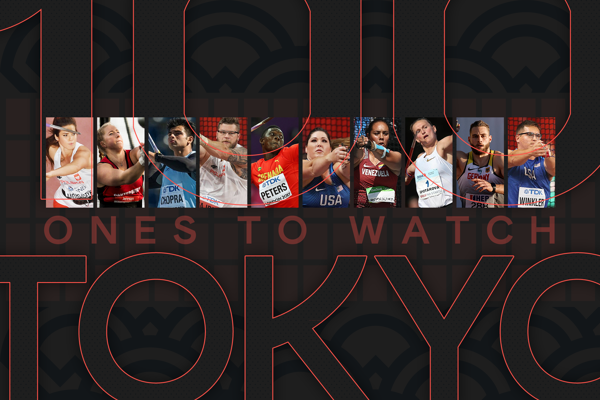