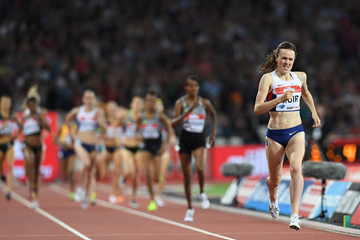 Not much can make up for the disappointment of missing out on an Olympic medal. But producing one of the best performances in history will lift any athlete’s spirits.

Laura Muir went to the Rio 2016 Olympic Games with the second-fastest season’s best of all the entrants in the 1500m. She had won in convincing fashion at the IAAF Diamond League meeting in London just three weeks before the Games, breaking Kelly Holmes’ British record with 3:57.49 and beating world indoor champion Sifan Hassan by more than three seconds.

A medal in Rio looked to be within reach, but the 23-year-old also knew that it wouldn’t be easy.

Front-running to a fast time on the international circuit is quite different to coming out on top in a tactical race against the world’s best athletes.

And that’s exactly how the race played out in Rio: a tactical affair with a slow first half, followed by a sudden surge of pace which led to a fast final 800m.

Muir joined world record-holder Genzebe Dibaba and pre-race favourite Faith Kipyegon at the back of the pack during the early stages. Muir moved to the front with two laps to go, prompting Dibaba and Kipyegon to make their move.

The third lap was covered in 56.7 seconds. Kipyegon was best able to maintain that pace, going on to win by more than a second from Dibaba, having covered the final 800m in 1:57.22.

But Muir paid for the fast third lap and went from third to seventh over the course of the final 200 metres. Dejected and disappointed, Muir fell to her knees after crossing the line and rested her head on the track.

“It’s not every day you’re in an Olympic final, but I gave it everything and I’m really proud of how I ran,” she said straight after the race, fighting back the tears. “But there’s more to come,” she promised.

Just 11 days after the Olympic final, Muir was back on the startline for another 1500m race, this time at the IAAF Diamond League meeting in Paris.

Up against 10 of the 11 women she faced in Rio – including gold medallist Kipyegon and bronze medallist Jenny Simpson – the race in the French capital represented the perfect opportunity for Muir to prove that she belonged among the world’s best.

And this time, instead of misery, Muir’s face was a picture of delight and disbelief as she crossed the line in 3:55.22, beating Kipyegon by one-and-a-half seconds to hand the Kenyan her first defeat of 2016.

Aside from taking another chunk off the British record, Muir’s time elevated her to 13th on the world all-time list. Since the turn of the millennium, only world record-holder Genzebe Dibaba has ever run faster.

“I don’t think you can ever make up for missing out on an Olympic medal, but the run in Paris definitely showed that going with the two leaders in Rio wasn’t a crazy move for me; it was a genuine, good response,” said Muir, speaking at the end of a season in which she won the Diamond Race. “I guess it was good to show that I was up there with those girls and that what I did in Rio wasn’t silly. And it was good to put that time down.

“I felt really, really good when I won in London," she added. "It was a low 3:57, so I thought I could probably do a 3:56. But to do 3:55 was quite a surprise, considering the travel back from Rio and not having had any therapy or much sleep. Faith is a hard cookie to break, so it was quite a big thing to beat her. It’s just a shame it wasn’t a week or so earlier.

“We looked really closely at the tactics for Rio. Andy (Young, her coach) is really good in analysing all of the videos and looking at all the splits. I did think about running from the front in the final, but it’s so, so hard to do, and I knew a lot of the girls could run sub-four. So we looked at the tactics and we decided on our best option, but that third lap was just too quick for me. The other two managed to keep it going while I couldn’t. But it’s very difficult in a race situation to know what pace you’re at.

“I ran the race the way I wanted to,” she added. “It just didn’t quite finish the way I’d hoped.”

Everything else about Muir’s 2016 season, though, went better than expected.

The national records, the world-leading time, the Diamond Race victory; Muir can look back with pride on a momentous year.

“I knew training had been going really well and I’d been setting a lot of PBs in training sessions, so I knew I was physically really, really fit,” she said. “But it’s one thing doing it in training and another thing doing it on the track. A lot of the time you need the right pace, the right field, the right conditions. I knew it was there, but to actually do it is always a shock.

“We didn’t really do anything differently this year,” she added. “It was more just consistency and not picking up any injuries or illness. I haven’t been ill since February and I’ve been training six days a week every week, so everything was pretty much perfect and we were just consistently training.

“It gives me huge confidence for next year. There’s only one person with a faster time than that who is currently running, so I’m very excited about that. And winning the Diamond Race has given me a wildcard entry for the World Championships, so I don’t have to worry about qualifying. I’m going!”

When Young first started working with Muir at the start of 2013, he knew he had a special talent.

“I have the next Paula Radcliffe/Kelly Holmes on my hands,” he wrote in a message to a friend. “Think the endurance of Radcliffe with the speed of Holmes, but without the injuries.”

By the end of that season, Muir had won the national senior indoor 1500m title while still a teenager, earned bronze at the European Under-23 Championships, and represented Britain at the World Championships in Moscow, setting a PB of 2:00.80 in the 800m.

She may not have been challenging Holmes’ and Radcliffe’s accolades that summer, but Muir’s times were significantly quicker than the two legendary athletes were producing at the same age.

Muir’s progress continued in the years that followed, reducing her 1500m PB to 4:00.07 in 2014 and then to 3:58.66 in Monaco the following year before going on to finish fifth at the World Championships in Beijing.

Now, having broken Holmes’ record at the age of 23, Muir and her coach have one eye on tackling the longer track distances at which Radcliffe holds the national records.

But Muir still has unfinished business at the shorter distances. “I know I can run sub-2:00 for 800m, but because I haven’t done it yet, it’s difficult to get into fast races,” she says. “Hopefully my 1500m time might get me into a quick race now.”

Muir already has a rough plan in place for next year. “I think I’ll do the indoor season and the European Indoor Championships,” she says. “It could be 800m, 1500m or 3000m.”

Outdoors, her focus will naturally be on the IAAF World Championships on home soil in London, but she hasn’t ruled out a defence of her Diamond Race Trophy.

“We never really target Diamond Leagues,” she explains. “We do blocks of races and then choose races that suit me, not the other way around, so if the Diamond Leagues fit then we’ll do them. Winning the Diamond Race was never a target, so it was a nice bonus to win. If it works out again next year, then great, but it’s all focused on championships and peaking for them.”

Her immediate focus, though, is not athletics related.

While many athletes are currently enjoying a well-earned break, Muir – who is four years into a degree in veterinary medicine at Glasgow University – is embarking on a two-week work placement at a canine rescue centre.

“I haven’t got any holidays planned, but after all the travelling to competitions this year, I’ll quite enjoy staying at home in one place,” she said. “I’m taking a gap year next year after the World Championships. After that, I’ll finish my fifth year of studies. It has taken me seven years to do a five-year course. But I’ll be done by 2018.”

Just in time for a clear build-up to the next Olympics in Tokyo, where a potentially stronger, fitter and faster Muir will take another tilt at making it on to the podium.