In the second part of our 2017 year-end review series, statisticians A Lennart Julin and Mirko Jalava look back on the best relay performances of the year.

For the past two Olympic cycles, this event has belonged to the Usain Bolt-powered Jamaican team which finished first on all occasions in three Olympics and four World Championships with the margin to second place averaging an astounding 0.71.

But nothing in sport is forever and the World Championships final illustrated that graphically on the anchor leg when Bolt’s hamstring cramped and sent him crashing to the ground when trying to make up a three-metre deficit.

The shock of seeing this fall of an icon in his last ever race made most onlookers miss what happened at the front, which was unfortunate because, in spite of Jamaica’s absence, the stride-for-stride duel down the homestretch between the hosts and the USA produced performances for the history books.

With 37.47, winners Great Britain and Northern Ireland became the No.3 nation of all time and the 37.52 for silver medallists USA was the fastest ever non-winning time.

With Jamaica out and Canada missing their ace Andre De Grasse, the bronze went to Japan, half a second behind the top two but also a couple of metres ahead of everybody else. What is quite remarkable about the Japanese team is that it did not include two of their three individual semi-finalists.

At the IAAF World Relays two years ago, the USA had won in a blazing North American record of 37.38 and they retained that title this year, despite running a second slower. Their 38.43 was sufficient for a win, due to a large extent to botched exchanges by the other main contenders Jamaica, Canada and Great Britain.

This event has been almost monopolised by the US all through the history of the World Championships finishing first in all finals but 1983 and 1991. Checking the sum of the team members’ season’s bests made another US win look imminent: USA averaged 44.26 vs 44.99 for Botswana and 45.23 for Trinidad and Tobago.

This outlook was strengthened after the heats where the USA was fastest, despite resting their top two, while assumed main opponents Jamaica – who had finished second to the USA at the World Relays in April – and Botswana were eliminated. Jamaica, who missed out by just 0.10, in hindsight perhaps may have regretted resting their two individual finalists.

That relays are something much more intricate than the arithmetic sum of the team members was once more proven in the World Championships final. The USA followed their traditional strategy of going for a clear lead on the first leg but this time they were unable to keep that advantage. However, with 43.70-runner Fred Kerley getting the baton first in the final exchange, another gold medal seemed all but guaranteed.

But Kerley was tired from competing continuously since January while Trinidad and Tobago’s Lalonde Gordon was full of energy and inspiration. He shadowed Kerley all the way and with just some 25 metres to go, he managed – in a move reminiscent of Kriss Akabusi’s in Tokyo in 1991 – to edge slightly ahead, claiming an upset win.

Great Britain was the only other team to dip under 3:00, although Belgium (with three Borlees in the team) and Spain came close.

With the World Relays returning to the calendar after a break in the Olympic year, there was global action also in the 4x200m and the 4x800m. In Nassau both those events quickly became tight head-to-head battles between two teams.

In the 4x200m it was Canada vs the USA. As the two teams were quite evenly matched in pure sprinting capacity, the decisive factor probably was that three quarters of the Canadian team had been part of a DNF in the 4x100m the previous day and thus had extra hunger for success.

Of course, having Olympic medallist Andre De Grasse in the team – and avoiding significant problems in all three exchanges – also helped to get the win in 1:19.42 with a margin of almost half a second to the US team.

In the 4x800m, Kenya and the USA left the other teams behind after just one lap of the first leg. At the first changeover, they had already put almost a second of daylight between themselves and the third team. On the second leg, Kipyegon Bett, with his 1:46.73, gave the Kenyan team a clear lead at halfway.

But Casimir Loxsom, through a 52.00 first lap on the third leg, put the USA back in contact and from then on the two teams kept together. Olympic bronze medallist Clayton Murphy – confident in his finishing sprint – just bided his time until some 50 metres remained before changing gears and overtaking Olympic fifth-place finisher Ferguson Rotich to claim the title for the USA.

Before the IAAF World Championships London 2017, United States and Jamaica were tied with three wins each from the previous six major championships. The season started at the IAAF World Relays with a strong US team not finishing their race and Jamaica in second place in an umimpressive 42.95.

Germany, with 42.84, was fastest in Nassau. While this was not a huge surprise – as Germany has had several good performances and fast times outside major championships – their latest medal in this event is still the bronze from 2009.

In London it was hosts Great Britain who posed the biggest challenge to the United States. The USA were fastest in the heats, clocking a 41.84 world lead, but Great Britain was just 0.09 behind in a 41.93 season’s best. In the final, United States was only 0.02 seconds faster, but still a clear winner in a world-leading 41.82 with Great Britain in silver medal position, clocking 42.12. Jamaica was a close third in 42.19 with Germany finishing in 42.36 for fourth place.

The USA’s clocking of 41.82 is the slowest winning time at a major championships since 2009, when Jamaica won in 42.06 at the IAAF World Championships in Berlin.

Switzerland clocked a 42.50 national record in the heats and finished in fifth place in the final in just fractionally slower 42.51. China was disqualified in the heats in London, but Su Minxiang team won the National Games in September in 42.59, the fastest Chinese time since 1997.

The USA has won 10 of the past 12 major titles on offer in this event, indoors and outdoors, since the 2008 Olympics. And looking at the individual runners’ results, there was only one favourite for the women’s 4x400m crown in 2017.

United States started well with a clear win and an early 3:24.36 world lead at the IAAF World Relays in Nassau in April. At the IAAF World Championships in London, USA came up with a strong heat, easily the fastest of all teams in a world-leading 3:21.66.

Defending champions Jamaica was the second fastest in the heats with 3:23.64, but their final ended after second-leg runner Anneisha McLaughlin-Whilby suffered an injury within the first 100 metres of her lap.

The USA dominated the final; anchor-leg runner Phyllis Francis, the individual world 400m champion, didn’t even have to look behind her as she crossed the line in 3:19.02, the fastest time in the world since the 2012 London Olympics and 0.04 faster than their winning time at the Rio 2016 Olympic Games.

Finishing in second place, Great Britain grabbed only their second silver medal in the history of this event at the World Championships; their first one came in 2013. Poland was a close third in 3:25.41 and the bronze medal was country’s first medal in this event outdoors.

The multinational Tumbleweed Track Club, anchored by Dafne Schippers, set a world lead of 1:28.77 at the Florida Relays in Gainesville in April, with the University of Washington just 0.01 seconds behind. 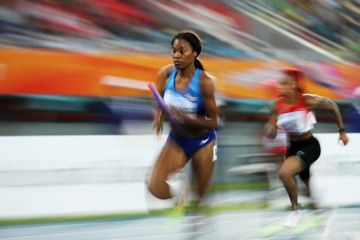 Looking back on Nassau: video highlights from... 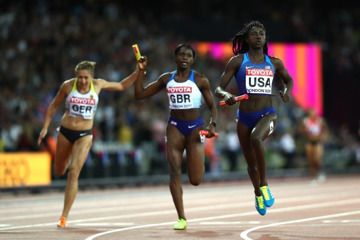 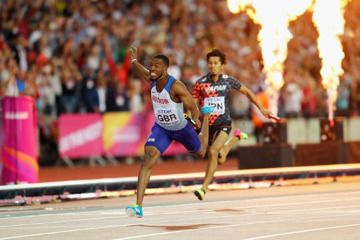 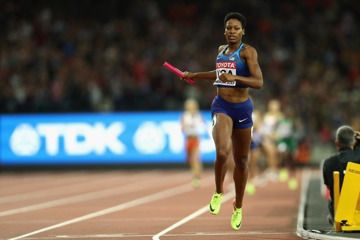 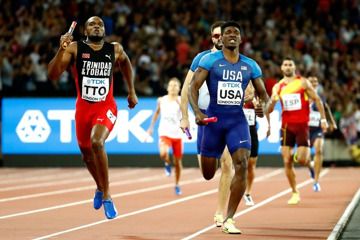