Nery Brenes ran the best 400m of his life (44.65) to give Costa Rica a historic gold while Brazil’s Olympic champion Maurren Higa Maggi completed her triple crown in the Long Jump on Wednesday on the fourth day of the athletics tournament of the 16th Pan American Games.

Running in lane one, Brenes moved to the lead by half way and kept pushing to achieve Costa Rica’s first medal of any color in Guadalajara and the second athletics medal in the history of the continental event.

“I have graduated today as a 400m runner," Neres said. "I have had a bizarre year. I trained better than ever, but things did not come out my way. I got back on track here and after the first 200m I was determined not to allow anyone to take the gold away from me.”

The 26-year reversed a sub par season and erased the disappointment of not reaching the World Championships final by breaking the 45-second for the fourth time in his career.

“I want to become the first Spanish speaking athlete to break the 44-second barrier. I am still far, but I am improving every year and I don’t see my limit yet,” he added.

Twice a finalist at the World Indoor Championships, Brenes moved to equal third on the 2011 world lists. He admitted his sub par results in 2011 before Guadalajara were due partially to not traveling to Europe early in the season. “I can’t make the same mistakes next year. That’s why I will run indoors in Europe in 2012 and will work harder. I see an Olympic medal is possible.”

Gold medalist at the 2010 Youth Olympic Games, 17-year old Luguelin Santos was pushed to an impressive 44.71 for silver. The time places him sixth on the all-time world junior lists.

Bahamas' Ramon Miller ran a season’s best (45.01), just two hundredths of a second off his personal best to clinch bronze, while his countryman and defending champion Christopher Brown was relegated to seventh. All finalists ran under 46 seconds.

The 35-year old opened her series with 6.58m and moved to the lead with 6.80m, before landing at 6.94m, her best leap since winning the Olympic gold in Beijing 2008 and great redemption after a disappointing performance at the Daegu final.

“I showed I am in good form and there’s still more to come. I am in great shape and it is important to end the year with a season’s best. It gives me a lot of confidence to start 2012 and to aim for the second (Olympic) gold in London,” said Maggi, who burst in tears after confirming her victory. She ran the victory lap carrying both the Mexican and Brazilian flags.

Adhemar Ferreira da Silva “was and will always be my inspiration,” said Maggi, who saw her idol up-close when the iconic figure was a patron in her BM team form the late 1990s to early 2000s. She was encouraged then to try the Triple Jump.

Reflecting on her Pan American journey, Maggi admitted that they are all important, but the third one may be more special, because, she said, “becoming a three-time champion at 35 is reserved for very few. I don’t know how many women have won three (Pan American) titles, but I will go to Toronto (2015), in Canada. I started and will end (her Pan American journey) there.”

“I will continue to Rio (2016) and will go as far as God allows me to,” concluded the Brazilian, who also showed her gold medals won from Winnipeg'99 and Rio 2007.

Brazil collected two more gold medals to move up to second in the athletics medal tally with five titles, one less than Cuba.

Lucimara da Silva broke her South American record to dominate the Heptathlon with 6133 points. Leandro Oliveira came from behind and pipped Byron Piedra to take the 1500m in a pedestrian 3:53.44, just 0.01 seconds faster than the Ecuadorian, who was hoping to improve his 5000m silver and his 1500m bronze in 2007. Venezuela’s Daegu finalist Eduard Villanueva held on for third in 3:54.06.

Yvette Lewis easily dominated the 100m Hurdles in 12.82, ahead of Canada’s Angela Whyte and Colombia’s Daegu semifinalist Lina Marcela Florez, both with 13.09.

María Princesa Oliveros joined Yenifer Padilla to give Colombia its first two wins on the track of the Telmex Stadium by taking the 400m Hurdles in 56.26, a personal best by almost a second. Ecuador’s Luci María Jaramillo (56.95) and Dominican Republic’s Yolanda Osana (57.08) were also rewarded with medals and national records.

Cuba’s Omar Cisneros was the fastest in the 400m semifinals with 48.99 and will face Dominican Republic’s 2004 Olympic, two-time World and 2003 Pan American Games champion and record holder Felix Sanchez, as well as Jamaica’s Isa Phillips.

The program also includes the 110m Hurdles semifinals, with Cuba’s Olympic and defending Pan Am champion and world record holder Dayron Robles running in the second heat.  All relay and men’s 800m semifinals are also scheduled. 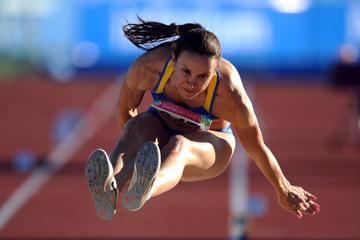