The sixth stop in the IAAF Diamond League promises a mouth-watering clash of the titans in the men’s long jump, women’s pole vault and 1500m at the Meeting International Mohammed VI D'Athletisme in Rabat on 16 June.

Flying South African Luvo Manyonga won the Diamond Trophy in 2017 and 2018. Rabat will be an opportunity for him to take a little revenge after gastric problems forced him to withdraw from Shanghai earlier this month.

Yet he will also have to face rising Cuban star Juan Miguel Echevarria, who stunned the world when he jumped a wind-assisted 8.83m at the IAAF Diamond League meeting in Stockholm last season.

Echevarria backed that up by jumping 8.92m, also wind assisted, in March earlier this year, and is now seen by many as a genuine contender to challenge Mike Powell’s long-standing world record of 8.95m.

The duo will no doubt have one eye on the meeting record of 8.38m, which is currently shared by Morocco’s Yahya Berrabah and South African Ruswahl Samaai.

With Manyonga and Echevarria set to lock horns, it promises to be an explosive battle at the foot of the main stand at the Prince Moulay Abdellah stadium.

Stefanidi, the world, Olympic and European champion, started her 2019 IAAF Diamond League campaign with a 4.72m victory in Shanghai.

Compatriot Suhr, the 2012 Olympic champion, will be competing in Africa for the first time in her career, as will 2014 European champion Anzhelika Sidorova.

Elsewhere, Genzebe Dibaba will take on USA’s Jenny Simpson in the 1500m.

Dibaba, the world record-holder and 2015 world champion in the event, has a slight lead over Simpson in their career head-to-head at 6-5, but Simpson got the upper hand in their last encounter, taking the silver medal at the 2017 World Championships. 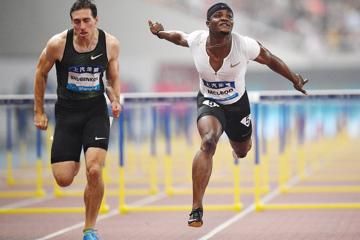 McLeod and Shubenkov to renew rivalry in Raba...