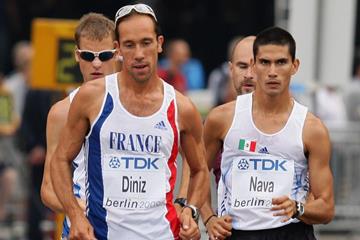 The IAAF World Championships reaches it mid-point on day five and takes a little breather with no scheduled evening session. Nevertheless, a busy morning vista has plenty to offer and could prove a pivotal day in the Russian team's drive for a successful overall championship and bid to top the medal table on home soil.

The sole medal event of the day to be contested is the gruelling men's 50km Race Walk with Russia looking to complete a clean sweep of all three titles in the discipline for a third straight World Championships, after already taking the men's and women's 20km titles here in Moscow courtesy of Aleksandr Ivanov and Elena Lashmanova, with both athletes barely out of their teens.

Their chances of completing the treble have suffered a blow following the withdrawals from the event of the past two World champions, Sergey Kirdyapkin and Sergey Bakulin.

However, any Russian race walking team should never be underestmimated and leading their challenge will be the European Cup silver and bronze medallists, Mikhail Ryzhov and Ivan Noskov.

Against them, watch out for the man who finished ahead of the Russian duo in the Slovak spa town of Dudince back in May, France’s 2013 world leader and two-time European champion Yohann Diniz.

Russia also boast three strong contenders in the women's Hammer Throw and seeking a route to the final will be their four-strong team, led by the defending champion Tatyana Lysenko.

The world leader, who also landed the Olympic gold medal in London last year, starts as favourite. Also hoping to feature in Friday's final will be her compatriots: Anna Bulgakova, Oksana Kondratyeva and Gulifya Khanafeyeva.

Opposing the home talent are two former World champions: Poland's Anita Wlodarczyk and Germany’s Betty Heidler, the latter being the current World record-holder and the former is her immediate predecessor.

The host nation also have high hopes of success in the men's Long Jump and looking to seek a path through the sometimes treacherous qualification session is European indoor champion Aleksandr Menkov.

Consistently the premier long jumper on the IAAF Diamond League circuit this season, he starts as pre-event favourite.

Dwight Phillips, the four-time World champion from the USA, is also entered but has been struggling to recover from the injuries that kept him out of the Olympics last summer.

On the track, the first-round heats of the men's 1500m will feature Kenya’s defending champion and world leader Asbel Kiprop, who set a personal best to climb to fourth on the all-time lists with his 3:27.72 clocking in Monaco last month.

His main opposition may come via his team mate Silas Kiplagat, the 2011 silver medallist. Watch out also for Djibouti's rising star Ayanleh Souleiman, who took a bronze in the 800m on Tuesday night and will be looking to get his country’s first gold medal in World Championships history.

With Tirunesh Dibaba, the women's 10,000m champion here in Moscow, opting not to compete in the 5000m, her Ethiopian compatriot and two-time Olympic champion for the distance Meseret Defar will take centre stage for the heats of that event.