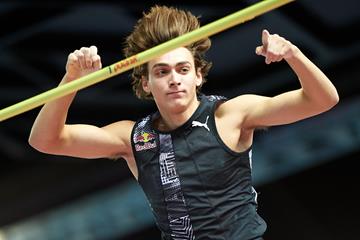 Fittingly, almost exactly six days and 17 hours after setting a world pole vault record of 6.17m at the last World Athletics Indoor Tour meeting, Armand Duplantis will be back on the runway at the Muller Grand Prix Glasgow on Saturday (15).

That gap between competitions could prove to be a lucky omen, but coming down from such a high – literally and figuratively – isn’t the easiest of tasks. It took six years for the last world record to be broken, so there’s no guarantee another one will happen so soon.

That being said, if anyone is capable of going higher, it’s Duplantis – the Swedish 20-year-old, who has already won European gold and world silver.

And if anyone can push him to higher heights, two-time world champion Sam Kendricks is the ideal opponent.

The US vaulter also made a bit of history last weekend. Competing in Rouen, the Olympic bronze medallist cleared a North American indoor record of 6.01m. This will be their second duel of the year, following their clash in Dusseldorf where Duplantis won with 6.00m as Kendricks cleared 5.80m for second.

Although Kendricks leads their career head-to-head record at 14-5, their tally since the start of 2019 – when Duplantis turned professional in what was his first year as a senior athlete – is currently tied at 4-4.

The UK all-comers’ record of 5.90m was set by former world record-holder Renaud Lavillenie when winning the 2018 world indoor title in Birmingham and the mark was equalled at last year’s European Indoor Championships in Glasgow by Pawel Wojciechowski, who is also in the field.

With two wins on the World Athletics Indoor Tour, Duplantis already has a comfortable lead in the 2020 standings. A victory in Glasgow would put him on 33 points – a score that would be tough, but not impossible, for any other vaulter to surpass after next week’s meetings in Lievin and Madrid.

While Duplantis and Kendricks will have their sights set on six-metre-plus vaults, British fans will try to cheer on Harry Coppell in his quest to break the British record of 5.83m. The 2013 world U18 champion cleared a PB of 5.80m in Rouen last weekend.

Shelly-Ann Fraser-Pryce hasn’t raced indoors since winning the 2014 world indoor title, but the world 100m champion has been tempted to line up for the 60m at Glasgow’s Emirates Arena to take on world indoor champion Murielle Ahoure.

The 33-year-old Jamaican, who scorched to the world 100m title in Doha last year in 10.71 just two years after giving birth to her son, has contested just four indoor competitions in her long career. Ahoure has been present in three of them, beating Fraser-Pryce at all but one.

The 2014 World Indoor Championships is the only time Fraser-Pryce has beaten Ahoure over 60m, winning in 6.98 to the Ivorian’s 7.01. Ahoure, meanwhile, got the better of Fraser-Pryce at the 2013 and 2014 editions of the Muller Indoor Grand Prix.

Neither has opened their 2020 indoor campaign, but Fraser-Pryce ran 7.32 outdoors in Kingston last weekend.

Two more global champions will be in action in the sprint hurdles.

Ali won at the opening World Athletics Indoor Tour meeting in Boston, beating Clemons and clocking a season’s best of 7.94. Clemons went on to win at the Dusseldorf leg of the tour and recorded a season’s best of 7.89 in Torun, but she was beaten in that race by Talay, who was timed at 7.87 – just 0.02 shy of her own Belarusian record.

World indoor champion Andrew Pozzi heads to Glasgow with an unblemished record this year, following wins in Paris and Torun, the former with a world-leading 7.52. But he’ll be put under pressure by Kuwait’s Yaqoub Mohamed Al Youha, third on the 2020 world list with 7.54, European indoor champion Milan Trajkovic of Cyprus, and Japanese record-holder Taio Kanai.

The men’s flat 60m is similarly loaded. Back to full fitness after a truncated 2019 campaign, USA’s Ronnie Baker will be keen to replicate his victory from the 2017 edition of this meeting, held in Birmingham. The world indoor bronze medallist, who won at the recent Millrose Games with 6.54, will line up against Britain’s 2017 Diamond League 100m champion CJ Ujah, European indoor champion and World Athletics Indoor Tour leader Jan Volko, and Japan’s world 4x100m bronze medallist Shuhei Tada

Record attempts for Reekie and Muir

Jemma Reekie has been one of the revelations of the indoor season so far.

She will line up for the 1500m in Glasgow and will be joined by training partner Gabriele DeBues-Stafford, who has also been in superb form this year, underlined by an 800m PB of 2:00.96 and Canadian records for 1500m (4:00.80) and the mile (4:19.73). Ethiopian duo Axumawit Embaye, winner in Karlsruhe, and 2016 world indoor silver medallist Dawit Seyaum are also in the field.

Muir, meanwhile, will be targeting the world indoor record in the final event of the afternoon, the 1000m.

The two-time double European indoor champion came within one second of Maria Mutola’s record figures of 2:30.94 in Birmingham three years ago, running a European indoor record of 2:31.93. The European 1500m champion set an indoor 800m PB of 1:58.44 when finishing second to Reekie on this same Glasgow track two weeks ago, so is clearly in good form.

Compatriot Adelle Tracey, also fresh from a recent indoor 800m PB (2:00.23) and Poland’s 2016 European champion Angelika Cichocka, back racing after sitting out the entire 2019 season, are also in the line-up.

In the 1500m, meanwhile, world bronze medallist Marcin Lewandowski takes on Kenya’s Bethwel Birgen, a winner over 3000m at the Boston and Karlsruhe legs of the World Athletics Indoor Tour.

The Muller Indoor Grand Prix Glasgow is the final scoring opportunity in the women’s high jump on the World Athletics Indoor Tour.

Undefeated this year, world silver medallist Yaroslava Mahuchikh currently tops the standings following her world U20 indoor record of 2.02m (pending ratification) in Karlsruhe. The Ukrainian teenager was also triumphant in Lviv, Cottbus and Banska Bystrica. A victory in Glasgow would secure her the World Athletics Indoor Tour crown for 2020.

British duo Morgan Lake and Nikki Manson, plus Antigua’s Priscilla Frederick, appear the most likely to join Mahuchikh at the higher heights.

The world silver medallist jumped a world-leading 6.92m in Karlsruhe and improved to 6.96m in Torun. A win in Glasgow will give her an insurmountable lead in the tour standings going into Lievin, the final scoring opportunity in the series for the long jump.

On Saturday she will be up against world heptathlon champion Katarina Johnson-Thompson, 2016 world indoor bronze medallist Lorraine Ugen and Sweden’s Khaddi Sagnia, who won in Glasgow two years ago with a national indoor record of 6.92m.

The slightly adapted format will see all athletes have five attempts, then the top three at that point will advance to the sixth round in which the best performer will be declared the winner.

Elsewhere, world indoor leader Justyna Swiety-Ersetic will aim to climb up the tour leader board when she takes on current leader Lisanne De Witte when they contest the 400m. Britain’s Jessie Knight and Jamaican hurdles specialist Janieve Russell should also feature.