Usain Bolt is guest of honour for the 30th birthday of the Herculis meeting in Monaco, but the invitation list for the 11th IAAF Diamond League meeting of the season is jam-packed with other athletic talent, with Wayde van Niekerk, Maria Lasitskene, Renaud Lavillenie and Caster Semenya among the high performers.

Bolt told a press conference in Monaco that he had just spent two weeks in Germany having treatment for a back problem. He also alluded to a “major setback” earlier in the year – the death of his “good friend” Germaine Mason, Britain’s 2008 Olympic high jump silver medallist, in a motorbike accident.

But the world and Olympic 100m and 200m champion was looking forward with confidence to Friday night’s race in one of his favourite stadiums and speaking confidently about the challenge of defending a global sprint title for the last time in London next month, despite the fact that his season’s best so far of 10.03 ranks him only 24th on this year’s world list.

“There’s always a good field here, and lots of guys have been under 10 seconds so far this season,” he said. “But I’m here to execute a good race, to work on a few things, to get myself perfect for the big race to come next month.

“I’m always expecting to win. The moment you doubt, there’s no point showing up.”

For most athletes competing at the Stade Louis II, this will be the last opportunity to sharpen up for the IAAF World Championships London 2017 from 4-13 August, and to secure their place in the IAAF Diamond League finals in Zurich on 24 August or Brussels on 1 September. Only those in the women’s triple jump and 3000m will have another opportunity to score more qualifying points, at the IAAF Diamond League meeting in Birmingham on 20 August.

The 25-year-old South African is now in that territory familiar to Bolt in that something extraordinary is expected of him every time he competes. But he will need to be fully focused to hold off a field that includes Botswana’s sprint duo of Baboloki Thebe, who has run a personal best of 44.02 this season, and Isaac Makwala, who clocked 43.92 in Madrid last Friday, becoming the first man to run a sub-44-second 400m and a sub-20-second 200m on the same day as he clocked 19.77 for the shorter distance.

Lasitskene, competing under a neutral banner, is the only woman to have cleared 2.00m this season – and she has done it 10 times.

Olympic and world 800m champion Semenya has been unbeatable at her main distance this season, but the Monaco field includes all those most likely to challenge her, including the Olympic silver and bronze medallists, Francine Niyonsaba of Burundi and Margaret Wambui of Kenya, as well as Canada’s world silver medallist Melissa Bishop and the US pair of 2013 world silver medallist Brenda Martinez and US champion Ajee Wilson.

Lavillenie will have effective home status and support as he seeks to elevate his form to the point where he can win the world outdoor title – the only honour missing from the world record-holder’s CV.

The 30-year-old Frenchman is also aiming to finish the season as IAAF Diamond League champion for an eighth successive time, having been the only athlete to have won the Diamond Trophy on every occasion since the series began in 2010.

But Lavillenie, who was unable to start training for his event until mid-May because of a foot injury, has found it tough going so far this season. His season’s best of 5.87m, achieved in Lausanne, was only enough for third place behind winner Sam Kendricks and Poland’s Pawel Wojciechowski, who both cleared 5.93m.

The Pole, a surprise winner of the 2011 world title, is in outstanding form this season, free from the injuries that have dogged his career in recent years.

Kendricks, the Olympic bronze medallist, has also beaten Lavillenie at the IAAF Diamond League meetings in Shanghai, Eugene and Paris, and leads this year’s world list with his first 6.00m jump.

Also in the equation for London are Canada’s world champion Shawn Barber, Sweden’s 17-year-old Armand Duplantis, who managed a prodigious 5.90m on 1 April this year, and of course the Olympic champion, Thiago Braz.

Braz is yet to find form this season and failed to record a mark last Sunday at the IAAF Diamond League meeting in Rabat, where Wojciechowski won with 5.85m.

The men’s javelin could be a similarly telling event to the men’s pole vault, given the presence of the two Germans who have seized the event by its neck in the space of the past year. Olympic champion Thomas Rohler has been consistently in 90-metre territory this season, having opened with 93.90m at the IAAF Diamond League meeting in Doha.

But his place behind Jan Zelezny on the world all-time list was taken by compatriot Johannes Vetter, who produced four 90-metre throws on a single night in Lucerne on 11 July, the best of them being 94.44m.

Also in the field are Kenya’s world champion Julius Yego, and 2012 Olympic champion Keshorn Walcott of Trinidad and Tobago, as well as the Czech Republic’s Jakub Vadlejch, who has a best of 88.02m this season.

Another significant meeting in the field events will take place in the women’s triple jump, where Colombia’s 33-year-old Olympic and world champion Caterine Ibarguen will face the 21-year-old world indoor champion Yulimar Rojas for the first time since the Venezuelan beat her at the IAAF Diamond League meeting in Rome.

World record-holder Kendra Harrison of the United States, who has run 12.28 this year, heads a 100m hurdles field stacked with talent and including compatriot and Olympic silver medallist Nia Ali, who has a 2017 best of 12.52, and fellow US athletes Jasmin Stowers and Sharika Nelvis. Also in the field is 2012 Olympic champion Sally Pearson, the Australian whose injury-plagued season came good at the IAAF Diamond League meeting in London as she followed Harrison home in a season’s best of 12.48.

The women’s 3000m brings together Kenya’s Olympic 5000m silver medallist Hellen Obiri and Britain’s European indoor 1500m and 3000m champion Laura Muir, 12 days after their rousing contest over the mile in London which saw Obiri set  a national record of 4:16.56 and Muir register a personal best of 4:18.03.

Kenya’s Olympic 3000m steeplechase champion Conseslus Kipruto faces a field that includes Olympic silver medallist Evan Jager of the United States and his two leading Kenyan rivals, Jairus Birech and 35-year-old double Olympic champion Ezekiel Kemboi. But Kipruto’s biggest challenge may be the ankle problem that caused him to drop out early from the race in Rabat last week.

Olympic 1500m champion Matt Centrowitz will have a rigorously testing evening against the two 21-year-olds who are the top Kenyans of the moment – Timothy Cheruiyot, who leads this season’s world list with 3:30.77, and Ronald Kwemoi, second in the world this year with a 3:30.89 at altitude as he beat Cheruiyot to the Kenyan title in Nairobi.

Also lurking in the field with something to prove is Kenya’s three-time world champion Asbel Kiprop. This track has witnessed some super-fast 1500m times, and tomorrow night could add to that legacy.

Bahamas’ Olympic 400m champion Shaunae Miller-Uibo drops down to the 200m. With a season’s best of 21.91, and a 21.76 clocking on a 200m straight in Boston, she is the fastest in the field, with Marie-Josee Ta Lou of Ivory Coast, who has run 22.16, and USA’s NCAA champion Kyra Jefferson, who has a 22.02 to her credit this year, looking her most likely challengers. 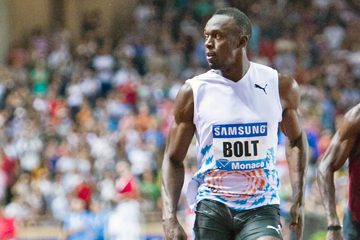