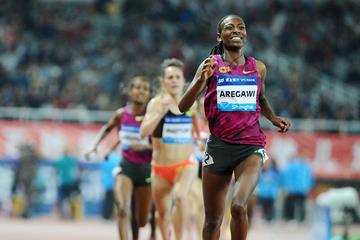 For those athletes who have made the short journey over from Zurich, the IAAF Diamond League meeting in Stockholm on Thursday (21) offers a swift reality checkpoint as they re-engage with the best athletes from all other parts of the world.

Some European Championship medallists will hold their ground; others, inevitably, will become reacquainted with their position in the overall scheme of things.

Among the most compelling of the races on offer will be the women’s 1500m which will conclude the programme, offering home fans the luxury of not one but two genuine contenders in Abeba Aregawi and the newly installed European 5000m champion Meraf Bahta.

Aregawi, the Ethiopian-born runner who became eligible to run for Sweden in 2012, has already earned her adopted country kudos through winning European indoor and world gold last year, but her ambitions at the recently concluded European Championships were thwarted by another naturalised Ethiopian runner, Sifan Hassan, a refugee who became eligible to run for the Netherlands last year.

Hassan is the fastest 1500m runner in the world this year with a personal best of 3:57.00 and withstood Aregawi’s challenge to take gold in Zurich.

Hassan’s ambitions of earning a European double were frustrated, however, by Bahta – a refugee from Eritrea who, like her, qualified to run for her adopted country last year. The tall, leggy figure of Bahta resisted Hassan’s efforts to pass her all the way down the finishing straight to take gold.

Seeing how these three champions get on in the same race will be fascinating, and the result will have significant bearing on the Diamond Race, where Aregawi leads with 12 points to Hassan’s nine.

Not that this will be in any way a three-way challenge given the presence of two-time world indoor champion Genzebe Dibaba and the USA’s Jenny Simpson, who has won world gold and silver in the past three years and whose personal best of 3:57.22 puts her third in this year’s world listings.

Watch out too for the British pairing of Laura Weightman, the European bronze medallist who has run 4:00.17 this year, and Laura Muir, who ran 4:00.07 at the Paris IAAF Diamond League meeting.

Bosse out for redemption

Pierre-Ambroise Bosse looked like a wounded animal after slipping from first to last place in the European Championship 800m final he had set his heart on winning. That could be bad news for his opponents in Stockholm, although the effervescent Olympic silver medallist Nijel Amos is not likely to let such considerations weigh too heavily on him given the way he managed to edge Bosse out of the Monaco IAAF Diamond League 800m, despite the French athlete setting a national record of 1:42.53 behind the Botswanan athlete’s 1:42.45.

Other top-class contenders include Kenya’s Asbel Kiprop, double world 1500m champion but also sixth fastest in the world this year with 1:43.34, Ayanleh Souleiman of Djibouti, the world indoor 1500m champion with a season’s best of 1:43.69, and Adam Kszczot, who will be on a high after winning the European title with a perfectly judged race in Zurich.

The men’s javelin promises to be one of the most competitive events of the evening, featuring as it does all three European medallists: the Finnish pair of Antti Ruuskanen and 2007 world champion Tero Pitkamaki, respectively gold and bronze medallists, and the Czech thrower who got in between them, world champion Viteslav Vesely.

They will be in the mix with Trinidad and Tobago’s Olympic champion Keshorn Walcott, Kenya’s Commonwealth champion Julius Yego and Egypt’s Ihab Abdelrahman El Sayed, who leads this year’s world listings with 89.21m.

Home eyes will be on European silver medallist Charlotta Fougberg in the women’s 3000m steeplechase, but the Swede, who set a personal best of 9:23.96 this year, is up against five women who have run faster this season, with Ethiopia’s Hiwot Ayelew and Sofia Assefa, respectively first and second on this year’s world listings with 9:10.64 and 9:11.39, looking likely to prevail.

Allyson Felix, the 28-year-old Olympic 200m champion, will return to Stockholm for the first time since her 2010 victory. The 28-year-old US sprinter is currently sixth on this year’s world list with a time of 22.34, and her main challengers look likely to be US team-mates Tori Bowie and Joanna Atkins.

France’s world pole vault record-holder Renaud Lavillenie, having secured his third consecutive European gold in Zurich, will be seeking a 21st consecutive win in Sweden. Any competition nowadays is his to lose, barring accident, but there will be pressure for the minor placings given the presence of the world indoor champion from Greece, Konstantinos Filippidis, and the European silver and bronze medallists, respectively Poland’s Pawel Wojciechowski and Jan Kudlicka of the Czech Republic.

Sandra Perkovic’s domination of the women’s discus matches that of Lavillenie in the pole vault, and after the national record of 71.08m she produced to retain the European title on Saturday, the best throw in the world since 1992, it is hard to see any other winner.

France’s Melina Robert-Michon, who took silver in Zurich with 65.33m, will be hoping to get closer to the Croatian, but Perkovic’s main opposition could come from former world champion Dani Samuels of Australia and Gia Lewis-Smallwood, who has a 2014 best of 67.59m and has beaten Perkovic twice in the past 12 months.

The women’s long jump will see the meeting of US athlete Tianna Bartoletta, who has the four leading marks this year with a best of 7.02m, pitted against the Frenchwoman who has just retained her European title and is the third-best woman on the listings with 6.92m, Eloise Lesueur.

Both these fine athletes face the prospect of eclipse, however, if Brittney Reese, the world and Olympic champion who jumped 7.25m last year, can find her best form.

Sally Pearson, Australia’s Olympic champion, won the Commonwealth 100m hurdles title last month, but events here will reintroduce her to the world’s fastest performers of 2014 in the US pairing of Dawn Harper Nelson (12.44) and Queen Harrison (12.46).

Meanwhile France’s Cindy Billaud, who has run 12.56 this year, will be looking for some serious consolation having been reduced to tears after her European Championships defeat by Britain’s Tiffany Porter. Gail Devers’ stadium record of 12.42 is under threat.

Spain’s 35-year-old Ruth Beitia has the best high jump to her credit this season in the field – 2.01m – and will be buoyed up by having successfully defended her European title on Sunday. But if her form dips, the silver and bronze medallists from Zurich, Mariya Kuchina, with a 2014 best of 2.00m, and Ana Simic of Croatia (1.99m) will be ready to take advantage, as will home jumper Emma Green and Poland’s Justyna Kasprzycka.

After the disappointment of finishing only eighth in the European Championships long jump, where his best of 7.95m was well below the 8.49m he achieved to stand second in this year’s world listings, Germany’s Christian Reif has something to prove. Jeff Henderson of the United States, with a 2014 best of 8.43m, will want to get back to winning ways after a period off injured, and China’s Li Jinzhe, who has cleared 8.47m this year, is another danger.

The men’s 400m hurdles includes the three fastest in the world this year: Javier Culson from Puerto Rico, Michael Tinsley from USA and South African Cornel Fredricks. Hurdles legend Felix Sanchez, the two-time Olympic champion, will also be in Stockholm.

The women’s 400m features three of the four fastest on this year’s world listings in Francena McCorory of the United States (49.48), her compatriot, Olympic champion Sanya Richards-Ross (49.66) and Novlene Williams-Mills of Jamaica (50.05). Also challenging will be Jamaica’s Commonwealth champion Stephenie Ann McPherson.

Nickel Ashmeade is the man to beat in the 100m, with a season’s best of 9.97, but fellow Jamaican Nesta Carter, who has done 9.98 this year, and Michael Rodgers of the United States (9.91) will fancy their chances.