By dipping well inside the Olympic qualifying standard, Semenya’s performance expanded her options even further ahead of the Games in Rio as she already owns qualifying marks in the 400m and 800m.

The 2009 world 800m champion continued her impressive comeback this season, launching a scorcher of a kick around the top bend and charged down the home straight to win by two seconds.

Her time of 4:01.99 bettered her seven-year-old career best by more than six seconds, and she narrowly missed out on the long-standing South African record of 4:01.81 set by Zola Budd in 1984.

“I don’t know yet what events I’ll be doing in Rio because we’re still trying to research my strengths and weaknesses (with coach Jean Verster),” said Semenya.

“We’ll go back to training because we’ve got more work to do, but we haven’t decided yet if we’ll double or not.”

Teenage prodigy Baboloki Thebe of Botswana stunned a quality field in the men's 400m final, taking the win in 44.69, the second-best time of his life after the 44.22 African junior record he set at altitude last month. 17-year-old compatriot Karabo Sibanda, the African junior champion, took silver in 45.42.

Their more esteemed teammate, Isaac Makwala, was edged into fourth place in 46.58, failing in his attempt to secure a third straight continental crown, with Nigeria’s Chidi Okezie taking bronze in 45.76.

Amos held off a spirited charge from the little-known local athlete to secure gold in 1:45.11, with Rozani earning silver in 1:45.38 to take almost a second off his PB and put himself in contention for selection to his nation’s Olympic team.

Though he admitted he had to work hard for the victory, Amos felt he was approaching his best form at the right time, less than two months before the Rio Games.

“My body’s a little tired, so I had to take myself out the comfort zone a bit and I had to push hard to win this race,” he said. “But after today's race I'm confident everything is coming together.”

Local favourites LJ van Zyl and Cornel Fredericks were outclassed in the men's 400m hurdles, with 2015 IAAF World Championships finalist Boniface Mucheru of Kenya charging to the top of the podium in 49.20.

Van Zyl, the 2011 world bronze medallist, settled for fourth position in 49.46 after struggling to maintain his rhythm over the final hurdle.

Fredericks, the Commonwealth champion, was sixth in 49.62 as he continued his struggle to regain his best form after returning this season from a lengthy injury hiatus.

Kabange Mupopo of Zambia earned a comfortable win in the women’s 400m in 51.46, with Kenya’s Margaret Nyairera grabbing silver in 52.24.

The Kenyan contingent were handed a rare defeat in the men’s 3 000m steeplechase with Chala Techo of Ethiopia taking the victory in 8:21.02, holding off compatriot Gigsa Nurgi who bagged silver in 8:22.79. Abraham Kibiwott earned a consolation medal in third, crossing the line in 8:24.19.

It was the first time a Kenyan did not win the men's steeplechase gold at the continental championships since the 2002 edition in Tunisia.

In other events, Commonwealth gold medallist Ese Brume won the women's long jump title with a best leap of 6.57m, with the benefit of a 2.8m/s tailwind, Mathew Sawe of Kenya won the men's high jump, clearing 2.21m, and Nwanneka Okwelogu led a Nigerian clean sweep in the women's discus, launching a winning heave of 56.75m.

The performance gave them a slim hope of qualifying for the Olympics on aggregate rankings, but with time running out before the July 11 qualifying deadline, they will need to record a time of 38.28 or quicker to move into one of the top 16 qualifying spots. 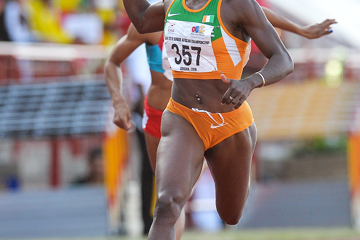