The injury and illness trials and tribulations of former world champion Blanka Vlasic are well documented and so it was no surprise that she got one of the biggest cheers of the night when she won the women’s high jump at the IAAF Diamond League meeting in Paris on Saturday night (5).

When she flew clear with her first attempt at 2.00m, the crowd roared, she squeezed out a tear or two before breaking into a smile, and it was no secret that everyone felt genuinely pleased for the woman who dominated the event for several years at the end of the last decade before the start of her problems.

In the end, it was enough to triumph in the French capital.

Russia’s world indoor champion Mariya Kuchina, almost 10 years younger than Vlasic, cleared an outdoor personal best of 2.00m on her third attempt but after both women brought the bar down three times at 2.02m, the night belonged to Vlasic.

The statistics books say that it was Vlasic’s 104th competition over 2.00m or better, and her 173rd jump at 2.00m or better, but, notwithstanding her many successes on the global stage, few will have felt better to Vlasic.

Several hours earlier, her compatriot Sandra Perkovic was facing her first defeat of the year in the women’s discus, lying fourth going into the last round, but she showed that she has nerves of steel by flinging her implement out to a meeting and stadium record of 68.48m with her sixth and final effort.

It was a distance that no one but her has exceeded this year and so it was, perhaps, no surprise that the remaining three women throwers could not respond.

Throwing well for second place was Australia’s 2009 world champion Dani Samuels, whose 67.40m was the third-best competition of her career.

Perkovic’s fourth IAAF Diamond League win of the summer gives her a commanding lead in the Diamond Race with 16 points.

The men’s shot saw supremacy remain on this side of the Atlantic, despite the presence of four top-class US throwers.

Reigning world champion David Storl opened with 21.17m but one of his predecessors, USA’s Reese Hoffa, came back at him with 21.38m in the second round.

The lead came back into the German’s hand after his third attempt, which reached 21.41m, and the positions stayed the same for the next three rounds.

US champion Joe Kovacs remains on top of the Diamond Race with eight points but was in nothing like the form that he showed in Sacramento a week ago when he reached 22.03m. In Paris he was more than two metres below that distance and finished eighth and last with 19.46m, getting zero points on this occasion.

The men’s triple jump made the home crowd happy by throwing up a surprise winner in the shape of French international Benjamin Compaore, whose 17.12m effort in the fifth round snatched the lead from Olympic champion Christian Taylor.

Taylor had bounded out to 17.03m with his first effort and, having been knocked off pole position, he immediately tried to respond in the fifth round but fell one centimetre short and neither man could improve with their final jumps.

“Nobody was expecting me, which is often the case,” said Compaore, a former world junior champion. “I had surgery on my left ankle so I had only done two previous competitions this summer.”

Down in seventh with 16.79m was Will Claye, who had barely a week ago bounded out to a world-leading 17.75m at the US Championships.

A predictable French win was notched up by pole vaulter Renaud Lavillenie, who acquired his fifth IAAF Diamond League win of the year and extended his 2014 unbeaten streak to 16 competitions.

Disappointingly for all concerned, certainly for Lavillenie himself and the crowd, his only successful vault of the competition, which was at 5.70m, was sufficient to take maximum Diamond Race points.

Nevertheless, Lavillenie became the first person this summer to secure a Diamond Trophy subject to him competing in his event final in Brussels on 5 September, and for the fifth successive year, as he has an unassailable lead of 16 points in the Diamond Race.

She still pulled out a fine personal best of 6.92m to beat a classy field, getting her big jump in the third round.

Three-time world champion Brittney Reese had taken an early lead with 6.82m in the opening round and then gone out to 6.87m in round two but the US champion, who has a well-deserved reputation for pulling out big efforts under pressure, couldn’t quite overhaul the local hero.

Lesueur had three fouls to finish her competition, struggling to keep her energy levels high after two days of illness earlier tin the week, but was biting her nails to the end as Reese flew out to 6.87m in round six.

Ihab Abdelrahman El Sayed recaptured some of the form he showed in May when he threw an African record and world-leading distance of 89.21m. In Paris, the Egyptian bounced back in style after some indifferent performances to win with a fifth-round throw of 87.10m.

Finland’s former world champion Tero Pitkamaki had set the standard for the others to chase when he hurled his spear out to a season’s best of 86.63m with his opening throw. He couldn’t improve and finished second, once El Sayed had displaced him from the top spot.

Germany’s Thomas Rohler finished third with a personal best of 84.74m with world champion Vitezslav Vesely down in fifth with 81.43m.

El Sayed edges into the lead in the Diamond Race as well with eight points but with three meetings still to go. 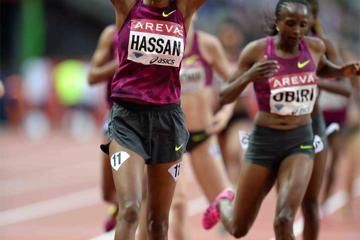 Hassan upsets the formbook with record-breaki... 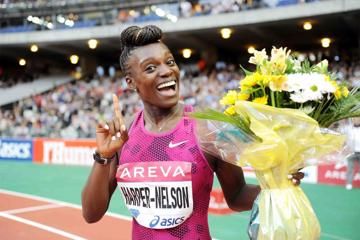