A capacity crowd again packed the Oregon Convention Center and they were again treated to a splendid night of athletics with 10 champions crowned on the third day of the IAAF World Indoor Championships Portland 2016.

Third gold for Eaton in his home town

It was not a world record for Ashton Eaton, but perhaps it was the most memorable of his three victories for two reasons.

He became the first man to win three world indoor heptathlon titles, and he did so in his hometown, one day after his wife Canada’s Brianne Theisen-Eaton joined him as a global champion with her pentathlon victory.

“Nothing I did this weekend matched what she did. It made the whole week for me. She is one who stole the show,” said Eaton after being confirmed the winner with 6470, a mark which only fellow American Dan O’Brien – and Eaton himself, who holds the world record at 6645 – have bettered.

History was made in the first final of the day as Yulimar Rojas became Venezuela’s first athletics global champion as she dominated the triple jump to win with 14.41m.

It was her only valid jump, but enough to secure victory for the tall 20-year old, trained by five-time world indoor long jumpchampion Ivan Pedroso.

“I am happy, proud of what I have accomplished, the best achievement in my sports career,” said an overjoyed Rojas, who was inspired by Arnoldo Devonich, winner of their country’s first Olympic medal, also in the triple jump, back in 1952. "This was the goal since I started the preparation for the indoor season. It’s been four months of hard work with my coach Ivan Pedroso. I believed in myself and my talent. This medal is for the people of Venezuela."

Berian from gun to glory in the 800m

USA’s Boris Berian produced the most impressive run of the evening, leading the 800m from start to finish to earn the USA’s 100th gold medal in the history of the World Indoor Championships.

The 23-year-old set a fast pace, hitting the first 200m in 23.92 and the half-way mark in 49.73. The other five finalists could not match the US runner’s pace, who crossed the line in 1:45.83 to an eruption of celebration in the Oregon Convention Center.

“My game plan was simple; get the lead and hang on,” said Berian. “It’s so exciting to have two Americans in the top three. It’s a huge accomplishment in front of our home crowd."

Before 2016, no Asian woman had ever run a World Indoor Championships final over two laps of the track. But that changed on Saturday as Bahrain’s continental champion Kemi Adekoya claimed gold in an Asian indoor record of 51.45.

Adekoya held off the US pair of Ashley Spencer (51.72) and Quanera Hayes (51.76) to deprive the host country of a fourth consecutive world indoor crown in this event.

The enthusiastic 7000-strong crowd propelled Michelle Carter to her best performance ever as she became the first US woman to win a global title in the shot put.

Carter remained composed and produced a North American indoor record and world-leading 20.21m to win the most important accolade of her career.

“I just had to focus on what I knew I could and needed to do," said Carter. "I was able to take some time and put everything together to do what I needed to do."

Czech Republic’s Pavel Maslak became the third man in the history of the IAAF World Indoor Championships, and the first one in 10 years, to successfully defend his world indoor 400m title when he showed his tactical strength to win in 45.44.

Maslak took the lead with 50 metres to go and sprinted to victory while Qatar’s 19-year-old Abdalelah Haroun (45.59) and Trinidad and Tobago’s Deon Lendore (46.17) took the silver and bronze medals.

Haroun, only just 19, became the youngest 400m medallist ever at the World Indoors.

World leader Dong Bin made history by becoming just the third Chinese athlete ever to win a world indoor title.

He confirmed his status as the favourite in the final with the three best jumps of the evening.

Dong sealed his victory by leaping 17.33m in the penultimate round with Germany’s Max Hess, another 19-year-old, getting the silver in personal best of 17.14m

Sifan Hassan of the Netherlands claimed her first global title in commanding style on Saturday night, the 23-year-old seizing control of the women’s 1500m final with less than three laps to run and refusing to be passed before winning in 4:04.96.

“I had a lot of confidence going into the race,” said Hassan. “My training has been very good, and the last 100 was very quick."

An equal world leader prior to the championships, Barbara Pierre accelerated from a perfect start to claim her first global title with 7.02 in the 60m.

Pierre was all smiles as she became the first US woman in eight yearsto win the title, holding off the Netherlands’ world 200m champion Dafne Schippers, who was second with 7.04.

“It means a lot,” said Pierre. “I’ve worked really really hard and to see it come out means a lot. I had to bring it home because the crowd was so loud and I thought: ‘I have to do this, I have to finish.’ It gave me that extra bit.”

Tamberi closed a magic evening of athletics at the Oregon Convention Center and put Italy back on top of the podium after 15 years by winning the men's high jump title.

A world leader at 2.38m, Tamberi confirmed his consistency throughout the winter with a first-time clearance at 2.36m, enough for the win, before three good misses in his attempt to join the 2.40m club.

Coming back from a surgery, Great Britain’s Robert Grabarz soared to a season’s best of 2.33m to clinch silver and Erik Kynard pleased his home crowd with a 2.33m effort for the bronze.

Defending champion Mutaz Essa Barshim pulled up on his second attempt at 2.33m with a slight cramp and opted to take his final available attempt at 2.36m, without success. He finished fourth with 2.29m. 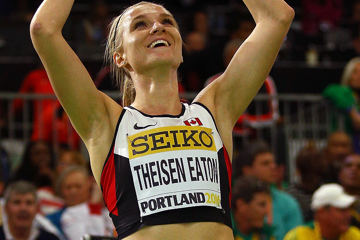 Six storylines from a superb second day in Po...