Three surprise winners struck gold within the space of 15 minutes of each other at the Ergo Arena in Sopot on the second day of the IAAF World Indoor Championships.

The first of those came in the women’s 60m hurdles. All along, defending champion Sally Pearson had looked to most likely to win gold, but after a blistering start she found US indoor champion Nia Ali on her shoulder over the final two flights of hurdles.

Pearson clipped the final hurdle, which gave Ali the edge in the sprint to the line as she won with a PB of 7.80. Pearson held on for silver in 7.85, just ahead of Britain’s Tiffany Porter (7.86), who added bronze to the silver medal she won in Istanbul two years ago.

The next track final, the men’s 60m, was closer and more surprising than the 60m hurdles.

At the half-way point, nothing separated the eight finalists as they sprinted neck-and-neck towards the line. But it was Britain’s Richard Kilty – who only finished third at his country’s national indoor championships – who edged ahead in the final few metres to win in a PB of 6.49.

In the closest final in World Indoor Championships history, just 0.09 separated the eight men, the first six of them finishing within 0.04 of one another.

US champion Marvin Bracy took the silver in 6.51 as Qatar’s Femi Ogunode got the bronze in 6.52. China’s Su Bingtian and Zambia’s Gerald Phiri recorded the same time in fourth and fifth to set national indoor records, but just missed out on bronze by 0.003 and 0.006 respectively.

Sandwiched between the track finals, the men’s long jump was taking place. China’s Li Jinzhe had led from the outset, opening with 8.19m and improving to 8.23m in round three. Sweden’s Michel Torneus crept into medal contention, first with 8.13m and then with 8.21m.

But in the final round, defending champion Mauro da Silva – who was a surprise winner two years ago – proved that lightning can strike twice and uncorked an 8.28m leap with his final attempt.

Jinzhe and Torneus tried to respond with their final jumps, but both were fouls.

In missing the world indoor heptathlon record by a narrow margin, it puts into perspective just how great Ashton Eaton’s other achievements to date have been.

Such is his all-round dominance, a world indoor record was being spoken about as though it was almost a certainty. The ease with which he performed in each of the seven events simply reinforced that view.

Eaton initially appeared disappointed when crossing the finish line in the 1000m one second behind his target time, but his final score of 6632 is still the second-best in history; hardly a disappointment.

It is still 156 points better than any other athlete has ever achieved. And, of course, it earned him another major title; his fourth global gold medal in the space of two years.

Behind him, Andrei Krauchanka set a Belarusian record of 6303 while Belgium’s Thomas Van Der Plaetsen also set a national record for the bronze medal, scoring 6259.

Before today, Djibouti had never won a medal at the IAAF World Indoor Championships. But Ayanleh Souleiman changed that in the men’s 1500m.

Wanting to avoid the bumping and barging, the world 800m bronze medallist stayed near the front for most of the race, tracked closely by Ethiopia’s Aman Wote.

Wote held on for the silver medal in 3:38.08 with defending champion Abdalaati Iguider this time having to settle for bronze in 3:38.21.

With world indoor record-holder Genzebe Dibaba focusing on the 3000m, world champion Abeba Aregawi was one of the biggest favourites of the entire championships.

Ethiopia’s Azumawit Embaye crossed the line in second place in 4:07.12 with Rababe Arafi coming through for third place. But a fair while later it was announced that Arafi had been disqualified for a lane violation, moving Nicole Sifuentes – who had set a Canadian indoor record of 4:07.61 – into the bronze medal position.

Favourites Maslak and McCorory live up to expectation in 400m

The indoor two-lap event can often be scrappy affairs, but today’s finals were pretty straight-forward. Or at least they were for the winners.

The women’s race was first up and USA’s Joanna Atkins and Shaunae Miller jostled for the lead at the break. But US indoor champion Francena McCorory came on strong on the second lap to move into the lead and win by a comfortable margin in 51.12.

In doing so, she became the third US woman in succession to win the world indoor 400m title. Behind her, 400m hurdles specialist Kaliese Spencer finished strongly to take silver in 51.54 while Miller held on for bronze in 52.06.

Later in the evening it was the men’s turn. Unlike McCorory, Pavel Maslek chose to lead from the outset and he got the all-important pole position at the bell. The Czech sprinter kept his composure to win in 45.24, the second-fastest time ever by a European sprinter indoors.

Behind him, evergreen Chris Brown set a lifetime best and world indoor M35 best of 45.58 to take silver with USA’s Kyle Clemons taking bronze in 45.74.

If tonight’s surprise performances proved anything, it’s that there are few guarantees in athletics. But Valerie Adams winning the shot put is as close to a certainty as there can be.

The New Zealander successfully defended her title from 2012, winning her ninth senior global title. She led from the outset and all five of her valid attempts landed past the 20-metre mark. The best of those, 20.67m, came in the penultimate round.

As expected, Germany’s Christina Schwanitz was her closest challenger but could not quite get past 20 metres, taking silver with 19.94m. China’s Gong Lijiao took bronze with 19.24m.

Spain’s Ruth Beitia led for most of the high jump final and it looked as though the European champion would finally win gold in her eighth appearance at the IAAF World Indoor Championships.

The 34-year-old had a perfect record up to and including 1.97m, but a first-time failure at 2.00m proved costly.

Maria Kuchina and Kamila Licwinko then seized the opportunity to snatch the lead, clearing 2.00m at the first time of asking. Beitia nailed the height on her second attempt, but no one went on to clear 2.02m.

Instead of a jump-off, Kuchina and Licwinko decided between themselves to share the gold medal as Beitia settled for bronze. Much to the delight of the home crowd, Licwinko became Poland’s first woman to win a world indoor title.

While Beitia crumbled in the latter stages of the high jump, Konstadinos Filippidis maintained his flawless record in the pole vault through to the end of the competition.

He cleared all heights with just one try, up to and including 5.80m, which was enough for the gold medal in a final in which world record-holder Renaud Lavillenie was absent.

Germany’s Malte Mohr came close to perfection, but needed two tries at 5.80m, which meant he had to settle for silver. Jan Kudlicka of the Czech Republic took the bronze medal on count-back, clearing the same height as the two other medallists.

It has been more than three years since the last 15-metre leap in the women’s triple jump, so no huge distances were expected in tonight’s final. World silver medallist Yekaterina Koneva won with 14.46m, the shortest winning distance since 1991, while 2011 world champion Olga Saladukha finished just one centimetre behind.

In third, Kimberly Williams won Jamaica’s first ever world indoor medal in this event with 14.39m. 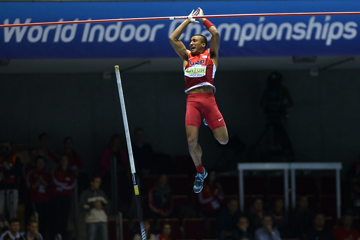 Eaton takes one giant leap closer to world re...