The Oslo Bislett Games got the result it wanted on Thursday (15) as the U20 Dream Mile went like a dream for home runner Jakob Ingebrigtsen. But the IAAF Diamond League meeting also got the result it never really expected as decathlete-turned-400m hurdler Karsten Warholm defeated a field including the Olympic champion Kerron Clement.

While there had been fervent hopes for the 21-year-old Warholm, who reached the Olympic semi-finals in his first year as a 400m hurdles specialist, they were less justified than those being held for the 16-year-old in what was effectively designed as a showcase for his prodigious talent.

Ingebrigtsen did all that could have been asked of him as he ran a beautifully controlled race to win comfortably in 3:56.29 – well inside the 3:58.07 he recorded at last month’s IAAF Diamond League meeting in Eugene to become the youngest four-minute miler in history.

But in maintaining his bold early charge all the way to the line, and lowering his own national record to 48.25, Warholm did more than could have been asked of him on an evening when one of the event’s legends, Ed Moses, was watching from the stands.

As Warholm, running in lane seven, came into the final straight in the lead, the crowd noise rose another level. Clement, running one lane inside him, was perfectly placed to move past and it appeared likely that the young man would pay for his adrenaline-charged start.

But the 31-year-old US athlete’s challenge simply fell away in the closing 80 metres as he drifted all the way back to eighth, with Yasmani Copello of Turkey taking second place in 48.44, with Ireland’s Thomas Barr third in 48.95.

The effort Warholm had expended, both physical and mental, was palpable at the finish. He remained a bent, exhausted figure just beyond the finish line for fully 10 minutes, face flushed, unable even to respond after Moses had come down from on high and offered him water.

He was down so long even the photographers who had raced over towards him began to drift away. Who would have expected that he would have earned a round of applause from home followers for the simple act of standing up?

“It was really great doing it here at Bislett,” he eventually said. “I felt strong and ran strong, but it was hard from the eighth hurdle. I was near the last hurdle and changed to 15 steps. I had no more to give and that’s usually one of my strengths.”

He had given enough – as had Ingebrigtsen.

After benefiting from the pacemaking of two runners of similar standard to him – Ireland’s Paul Robinson took the field through 800m in 1:57 and Australia’s Paul Rayner reached 1200m in 2:57 – the young Norwegian took his cue.

Leaning forward, his dark hair flopping over his forehead, he lifted the noise level in the stadium as he accelerated away from the field before crossing the line with arms outstretched in triumph as he viewed the digital clock.

He was swiftly joined on the track by the delighted meeting organiser Steinar Hoen, who had taken the bold initiative to set up a potential moment in the home limelight for Ingebrigtsen by transferring the Dream Mile title that has always been applied to senior racing.

“This was crazy,” said Ingebrigtsen. “I felt very strong today and the spectators were amazing, unbelievable. I could have run faster today, but it doesn’t matter, because it was a crazy experience.”

The women’s 100m hurdles took place to a rising roar of Norwegian excitement as home athlete Isabelle Pedersen, running in lane five, established a lead that was only overtaken in the final 15 metres by Germany’s Pamela Dutkiewicz, who came through to win in 12.73.

Pedersen, whose desperate momentum caused her to stumble and then catapault into a forward roll, was rewarded with a personal best of 12.75, just 0.01 shy of the Norwegian record. But she had to settle for a narrow third place, with USA's Olympic bronze medallist Kristi Castlin finishing second, credited with the same time.

Amid these home highs, however, there was relative disappointment when it was announced that Karoline Grovdal, Norway’s Olympic 3000m steeplechase finalist, was unable to start.

The race produced a dramatic final spectacle as Kenya’s Norah Jeruto, who had led through the bell only to be overtaken on the back straight by Ethiopia’s 2012 Olympic silver medallist Sofia Assefa, kept grimly in touch, before finding enough energy in the final 10 metres to virtually claw her way back into the lead, winning in 9:17.27.

While the home fans may have been disappointed, Jeruto’s dogged effort turned a section of the stand past the finish line into a frenzied mass of jubilation as Kenyan followers marked her effort with songs and waving flags.

The joint men’s and women’s discus event produced one surprise and one apparent formality. Germany’s Harting brothers Robert and Christoph, respective Olympic champions in 2012 and 2016, could only manage fifth and sixth place respectively with 65.11m and 64.13m. Poland’s world champion Piotr Malachowski was seventh with 63.70m as victory went to Sweden’s Daniel Stahl, who threw 68.06m to finish clear of Jamaica’s Fedrick Dacres, second with 67.10m.

The women’s discus, however, went to Croatia’s Olympic champion and current leader on the road to the final, Sandra Perkovic, with a best of  66.79m.

Baboloki Thebe of Botswana took the men’s 400m race in 44.95 after overtaking early leader Matthew Hudson-Smith in the closing stages, with the Briton finishing second in 45.16 ahead of the Czech Republic’s Pavel Maslak (45.52).

As expected, Olympic champion Tianna Bartoletta was beyond reach in the long jump, winning with a best of 6.79m, although Darya Klishina, competing under a neutral banner, came within four centimetres of her.

BACK
Pages related to this articleAthletes
Tianna BARTOLETTA 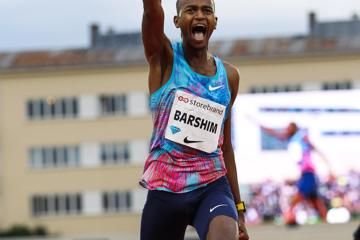