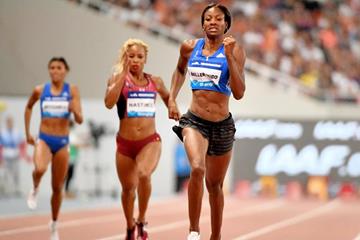 Eight Olympic champions will converge on the Moroccan capital Rabat on Sunday (16) for the Meeting International Mohammed VI d'Athletisme, the 10th stop of the 2017 IAAF Diamond League.

[Note: for the latest news and changes, please see our live updates page.]

Two of those Rio winners will line up in the same event making the women's 400m showdown between Shaunae Miller-Uibo and Caster Semenya, the Olympic 400m and 800m champions respectively, the most anticipated showdown on the evening programme.

Miller-Uibo has shown solid form from the outset of the season, first with a thrilling sub-50 leg in the mixed 4x400m relay that capped the IAAF World Relays in April, and again in her 400m debut, a 49.77 victory in the Shanghai leg of the IAAF Diamond League. More recently she ran 49.86 for a runaway victory in Budapest 11 days ago.

Semenya hasn't run nearly as fast over one lap – she set her 50.40 lifetime in Brussels last year and has a 51.60 season’s best from early April – but arrives as the world leader in her specialty at 1:56.61 from Doha.

The field also includes Quanera Hayes, the fastest in the field this year. The world indoor bronze medallist clocked 49.72 to capture the US title less than three weeks ago, the second fastest run of the season.

On the straight, Elaine Thompson will be gunning for her 14th straight 100m win. The double Olympic champion, who has chosen to focus primarily on the 100m this season, comes to Rabat as the world leader at 10.71, and on the heels of a 10.94 victory in London.

She'll expect to be pushed by Trinidad & Tobago's Michelle-Lee Ayhe, who improved her own national record to 10.82 in Port of Spain three weeks ago, and Marie-Josee Ta Lou of Ivory Coast, who chased Thompson to the line in Paris, clocking a 10.96 season's best.

Kipruto and Jebet return to action

Both steeplechase fields will be headed by Olympic champions.

In the men's race, Conseslus Kipruto returns to action for the first time since winning the Kenyan world championships trials last month. A slight injury sidelined him from Ostrava's Golden Spike but he's back now looking to collect a second straight Rabat title. He's currently the world leader at 8:04.63.

In the women's race, Ruth Jebet will be looking to make amends after her last race, one that began with world record ambitions and ended soon after she tumbled over the water jump with three laps to go. She still forged on and finished fourth in Paris, but it wasn't quite the return engagement she was hoping for a year after breaking the world record at the same meeting in the French capital.

On paper she's far ahead of the pack here – none have even seriously threatened the 9:10.95 performance Jebet produced in Paris, tumble and all – and shouldn't expect to be under too much pressure here. Her closest rivals look to be Kenyan Norah Jeruto and Germany's Gesa Felicitas Krause who've improved to 9:15.35 and 9:15.70 respectively this season.

Turning to the field events, Olympic champion Ryan Crouser will be looking for his 10th straight victory in the shot put. He's been unstoppable this year, reaching 22 metres or better in six of his seven competitions. Less than three weeks ago, the 24-year-old moved up to seventh on the world all-time list after his 22.65m win at the US Championships.

The field includes the most recent entrant to the 22-metre club, Czech Tomas Stanek, who reached 22.01m this season, and Ryan Whiting, the two-time world indoor champion who was third at the ultra-competitive US Championships.

In the triple jump, world and Olympic champion Caterine Ibarguen leads the field and will be looking to return to her winning ways after losing to Yulimar Rojas in Rome. Ibarguen's quest will be made infinitely easier with Rojas absent from the field. Closest on paper is Kazakh veteran Olga Rypakova whose 14.64m season's best is 24 centimetres shy of Ibarguen's best 2017 leap. Both are members of the event's elite 15-metre club, Ibarguen with 15.31m from 2014 and Rypakova at 15.25m set in 2010.

Another Olympic champion figures prominently in the men's pole vault, but not necessarily because he's riding high. Brazil’s Thiago Braz will start with just a modest 5.60m season's best to his name, hoping to build some upward momentum in the final three weeks prior to the start of the World Championships.

At the moment the class of the field is Pawel Wojciechowski, Poland's 2011 world champion who improved his national record to 5.93m in Lausanne nine days ago. Like Braz, Shawn Barber, the defending world champion, will also be looking for a performance better than his 5.71m season's best.

De Grasse vs Webb over the half lap

Back on the track, the men’s programme includes the 100m and 200m dashes. In the latter, a Diamond event, the focus will fall on Canada's Olympic silver medallist Andre de Grasse, 400m standout Fred Kerley and US champion Ameer Webb, who will be looking to extend his lead in the IAAF Diamond League standings.

Webb, who clocked his 19.85 personal best in Doha last year, arrives on the heels of a 20.13 win in London. Meanwhile, Kerley, the US 400m champion, will be making his second appearance since joining the pro ranks last month, and again over the half lap. The 22-year-old was second in London where he improved his lifetime best to 20.24.

The 100m is led by Yohan Blake who is making his first appearance since securing the sprint double at the Jamaican Championships on 25 June. Blake, the IAAF Diamond League record-holder in both dashes, has clocked 9.90 in the 100m this season and 19.97 over the half lap.

South African Thando Roto, Ben Youssef Meite of Ivory Coast and Nethaneel Mitchell-Blake have dipped under 10 seconds this year with 9.95, 9.98 and 9.99 respectively.

The women's 400m hurdles field includes Jamaica's Janieve Russell, who has clocked 54.03 this year, Switzerland's Lea Sprunger, the runner-up in Lausanne, and two-time world champion Zuzana Hejnova, who is still looking for her first top-three finish of the season.

In the London 800m last weekend, Nijel Amos showed he was on the way to form similar to that which propelled him to Olympic silver on that same London Stadium track five years ago with an impressive 1:43.18 win.

In Rabat he'll face Kenyan rising stars Kipyegon Bett, the world U20 champion who won in Shanghai and raced to runner-up finishes in Paris, Rome and the Kenyan trials, and US champion Donavan Brazier, another runner with sub-1:44 credentials.

The women's 1500m promises to be wide-open affair, with the race providing the season's first high octane test for most of the entrants. Moroccans will have high hopes for 26-year-old Rababe Arafe, the world and Olympic finalist and 2012 African champion who improved to 4:01.75 in Eugene.

Poland's Angelika Cichocka and Laura Weightman of Great Britain have both dipped under 4:02 this year, the Pole to a career best 4:01.61 and Weightman to 4:01.95. Shannon Rowbury of the US, who is London-bound in the 5000m and a 2009 world bronze medallist, is also in the field.

Capping the meeting is a men's 3000m race, a non-Diamond race event spotlighting Moroccan Abdalaati Iguider, the world indoor 1500m champion and Olympic bronze medallist in 2012. The fastest in the field over the distance this season is Adel Mechaal of Spain who clocked 7:35.28. The 26-year-old took the European indoor 3000m crown in March.

Elsewhere on the infield

The men’s high jump field suffered a setback with world leader Mutaz Barshim's withdrawal a few days ago, but it will feature the year's first high profile international appearance by rising German star Mateusz Przybylko, the 25-year-old who improved to 2.35m earlier this season and last weekend took his first two stabs at a would-be 2.38m national record.