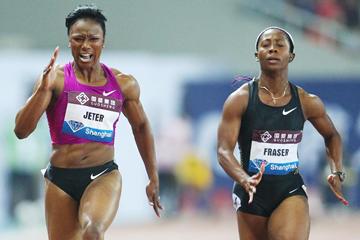 Diamonds may be cool, like ice, but the competition in the IAAF Diamond League Shanghai on Saturday (18) will be anything but.

It shapes as being hot, hot, hot, despite a weather forecast that is an each-way bet as to whether the persistent rain and drizzle of the past two days clears up before, or after, the meeting.

Seven Olympic champions from London 2012 will be competing, but such is the quality of the fields that none could be described as a red-hot favourite.

Shelly-Ann Fraser-Pryce comes up against Carmelita Jeter in the women’s 100m; surprise London Javelin champion Keshorn Walcott meets Andreas Thorkildsen and Vitezslav Vesely; Kirani James is up against LaShawn Merritt, Luguelin Santos and Lalonde Gordon in the 400m; and Meseret Defar meets Sylvia Kibet and Genzebe Dibaba in the 5000m.

Olympic champion and World record-holder Aries Merritt looks the safest bet in the men’s 110m Hurdles, but even he cannot afford any early-season slip-up against 2011 World champion Jason Richardson.

Clash of titans in women’s 100m

Shelly-Ann Fraser-Pryce and Carmelita Jeter have been two of the leading protagonists in women’s sprints over the past Olympic cycle.

Although Fraser-Pryce has mostly enjoyed an edge where it matters most, Jeter has been somewhere the Jamaican yearns to go. That’s to the lower reaches of the 10.6-region, indeed the 10.64 Jeter ran in Shanghai four years ago.

Fraser-Pryce spoke of that 10.64 as “raising the game” at the final pre-meeting press conference. She has ambitions of getting there herself – and soon.

Despite absence, Liu Xiang’s presence will be felt

For most of the Shanghai meeting’s history – from its early days as a late-season fixture to its current Diamond League glory – Liu Xiang has been a constant.

Last year, Liu astounded with a resounding 12.97 run on a wet track on a night of pretty well constant rain which stopped only for his race.

Liu’s ability to stop the rain may yet prove as big a loss to this year’s meeting as his ability to run fast times. In any case, he was in everyone’s minds as Aries Merritt, Jason Richardson and Xie Wenjun fronted the press conference.

Merritt was among those left behind last year, virtually the last false step on his road to the Olympic gold medal and his fabulous World record 12.80 in Brussels. It would be a shock if he slips up here, an even bigger one if anyone other than Richardson is able to capitalise on any early-season lapse.

Kirani James is a little young to be acclaimed king of the 400m, but wins at both the Daegu 2011 World Championships and in London last year have given him a pretty strong grip on the crown.

James opens his Diamond Race here against pretty well as strong a field as could be assembled anywhere. Challenging him for the win will be London minor medallists Luguelin Santos and Lalonde Gordon plus 2008 Olympic and 2009 World champion LaShawn Merritt.

Yelena Isinbayeva’s insistence that she is not yet done with the women’s Pole Vault will be tested here, especially if the conditions remain wet. Defeats, a year’s sabbatical, more defeats and the doubling in number of the 5m club with Olympic champion Jenn Suhr recently clearing 5.02m indoors, have all indicated the gap between her and the rest of the world has closed.

Isinbayeva, however, insists she may go on, even as far as Rio 2016. A strong opening here would reinforce such thoughts. Her strongest rival appears to be her Russian teammate Svetlana Feofanova.

“It’s hard to say what I’m going to do after the (Moscow) World Championships,” Isinbayeva said this week. “I did think the 2013 season would be my last, but at the moment I want to see how it goes.

“If I’d won a third Olympic gold in London I would definitely have stopped after Moscow, for sure. But now, I’m still thinking about what to do… I still think I am able to jump World records.”

Greg Rutherford may not know who his strongest rival is in a loaded men’s Long Jump field. Although early-season form has been patchy, he has several opponents with big personal bests to their name, including London silver medallist Mitchell Watt, Dwight Phillips, Irving Saladino and Godfrey Mokoena.

“I have had a couple of competitions in Australia against Mitchell and managed to come out on top in those, but this is such a stacked field,” said Rutherford this week. “It’s definitely my biggest challenge since the Olympics.”

The men’s High Jump looks just as even, if not quite boasting as many stars. Qatar’s Mutaz Essa Barshim will fancy his chances of going one better than his second place in Doha, and will be up against the man who surprisingly beat him there, Ukraine's Bohdan Bondarenko.

The 3000m Steeplechase, as ever, looks a safer Kenyan triumph, but who will it be? Paul Kipsiele Koech is near invincible in this kind of racing, Brimin Kipruto is replete with World and Olympic honours and Conseslus Kipruto is the emerging young talent.

There is not much 2013 form to go on in a women’s 800m headed by 2008 Olympic champion Pamela Jelimo, former World champion Janeth Jepkosgei and Burundi’s Francine Niyonsaba. The women’s 5000m is similarly hard to predict, but Defar should win if she is in anything like her best form.

Keshorn Walcott will not have to look hard to find competition in the Javelin. The surprise Olympic champion opened his season well this year, but he faces any number of tough opponents led by Andreas Thorkildsen, Tero Pitkamaki and Vitezslav Veseley.

Walcott said this week his Olympic win “hasn’t been distracting to me at all… at that age.

“Thorkildsen is a great athlete and competitor but there are other athletes too, including others from the Olympics. It will be a keen and tough competition but that’s OK, I am looking forward to it.”

Poland’s giant Piotr Malachowski could come out on top in the Discus.

The Shot Put is the only women’s throwing event and could see a local victory to China’s Gong Lijiao, who is second to Valerie Adams on the 2013 world list with 19.97m.