Kiryu out to prove himself in Tokyo - IAAF World Challenge

It won't take a Bolt of lightning to generate excitement in the men's 100m at the Seiko Golden Grand Prix, an IAAF World Challenge meeting, in Tokyo on Sunday. The prospect of the first Japanese breaking 10 seconds, and maybe an Asian Area record - and a high school student, no less – already has the place buzzing.

Yoshihide Kiryu, 17, tied the World junior record* by clocking 10.01 on Monday in Hiroshima and will line up in Tokyo's National Stadium against a field that includes three sprinters who have gone below the 10-second barrier.

"I can't wait to see him," the former IAAF World Championships 400m Hurdles gold medallist Bershawn Jackson told www.iaaf.org. "I'm looking forward to seeing him more than my own race."

Should the stocky Kiryu, a final-year student at Kyoto's Gakunan High School, eclipse the 10-second barrier, he would break Koji Ito's Japanese record of 10.00 that has stood since 1998. He could also topple the Asian Area record of 9.99 that is held by Qatar’s Samuel Francis.

Kiryu said he is ready for the challenge from US pair of Mike Rodgers and Mookie Salaam, as well as the Bahamas' Derrick Atkins, the 2007 World Championships 100m silver medallist, all of whom are part of the elite group of 83 men who have gone below 10 seconds for 100m.

"If I am just satisfied with tying the World junior record, I'll lose right away," commented Kiryu. "I want to pursue my way of running. I want to become the first [Japanese] to go under 10 seconds."

Rodgers, who said he has seen video of Kiryu's flashy run, said the key will be how the youth handles the pressure that accompanies his new-found fame.

"They're going to have big expectations for him to win on Sunday," said Rodgers. "My advice to him is just focus on himself and run his race. There's going to be other big names here and he's going to have a lot of pressure on him."

Also in the race will be three-time Japanese champion Masashi Eriguchi and Jason Rogers, a member of St Kitts and Nevis' bronze medal-winning 4x100m Relay team at the 2011 World Championships.

For Rodgers, the meet has other implications as the 2009 U.S. champion tries to get back on track after a rough year in 2012. Battling to recover from a fractured foot, he failed to make the London 2012 Olympic Games team by 0.01.

Rodgers has got this season off to a promising start, clocking 10.04 into a headwind at the Mt SAC Relays and running a strong relay leg at the Penn Relays.

"I should be expecting some fast times in the next couple of meets," added the 2010 IAAF World Indoor Championships 60m silver medallist.

Like Rodgers, Jackson is looking to put more than the competition behind him.

He fell in the semi-finals at the 2011 World Championships, then missed out on going to the Olympics last summer after placing fourth at the US trials.

"Last year was tough, a humbling experience not making the [Olympic] team," said Jackson. "Hopefully this meet, I'll get the world-lead, or run something good. I'm not expecting too much. I just want to have fun this year coming off a disastrous season. Have fun and run fast."

Jackson tuned up for the meet by racing Friday at the Shizuoka International, a meet on the domestic Japan Grand Prix circuit, He won his race in the four-heat competition, but his time of 49.62 was only good enough for fourth place overall.

"I did just enough to win, not thinking that I was going to run less than 48.7," added Jackson. "The best years in my career came from starting out in Japan. This year I'm looking forward to coming here and running fast like always, and get a victory to start the season out. You want to start with confidence."

The other three took home bronze medals: the US pair of Kellie Wells in the women's 100 Hurdles and Janay DeLoach in the women's long jump, as well as Kenya's Abel Mutai in the men's 3,000 Steeplechase.

Chicherova missed the indoor season this winter and will be having her first competition in eight months. He nearest rival is likely to be Kazakhstan's Marina Aitova, the 2006 Asian Games gold medallist.

The women's 100 Hurdles will draw plenty of attention, as Japanese fans hope that Wells and two-time World indoor champion Lolo Jones can pull Ayako Kimura across the 13-second barrier. Kimura clocked a wind-aided 13.02 in Hiroshima as she moves closer to Yvonne Kanazawa's national record of 13.00 set in 2000.

Another Japanese athlete in the spotlight will be 33-year-old Yukifumi Murakami, the 2009 World Championships bronze medallist in the men's Javelin.

Prior to Monday, it’s fair to say Murakami had done little of real note since Berlin, despite still occasionally throwing over 83 metres, including losing his 12-year grip on the national title last year to collegian Genki Dean and failing to make the final in London.

However, Murakami pulled off a surprise in Hiroshima on Monday when he uncorked a personal best throw of 85.96m, the second-farthest in the world this year and more than two metres more than he had ever thrown before. 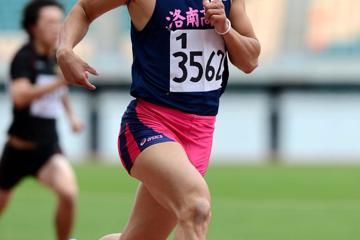