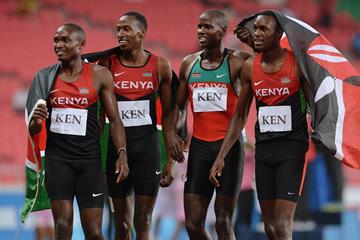 Kenya's 4x400m men finish off the All-Africa Games in style

The Kenyan men’s 4x400m squad brought the curtain down on the athletics competitions at the All-Africa Games with a win in a Games record of 3:00.34 and a thrilling duel with favourites Botswana on Thursday (17).

Nijel Amos, the 800m winner, was running the second leg for Botswana and handed over a good lead to his team-mate Gaone Maotoanong but Kenya’s Kiprono Kosgei fought back and the two nations were absolutely even on the final handover.

With Botswana able to field 400m winner and former African record-holder Isaac Makwala on the last leg, it looked as though they were about to notch up their fourth victory of the athletics programme, but Boniface Mweresa had other ideas.

The Kenyan had been soundly beaten in the individual 400m by Makwala and was a distant second in that event but managed to get the inside line.

Makwala loomed ominously on his shoulders and most people were just waiting for the moment when he was going to pounce and leave his Kenyan rival trailing in his wake.

Instead, Mweresa had an inspired final 150 metres and held off Makwala as the latter tried to find another gear that was not there on this occasion.

Over the final 40 metres, Makwala’s legs uncharacteristically turned to lead and Mweresa secured the win before collapsing prone on the track while his delighted team-mates danced around him.

Just a few minutes earlier, Botswana had got a gold medal in the men’s high jump, thanks to Kabelo Kgosiemang. He regained the title he won in 200, having taken the silver four years ago, after going flawless up to the winning height of 2.25m.

He then had the bar raised to what would be a Games record 2.31m and had a decent final effort.

The top event on Wednesday was, without doubt, the women’s 10,000m which saw Kenya’s Alice Aprot win on her international debut at the distance in a Games record of 31:24.18. Fellow Kenyan Gladys Chesire was second in a personal best of 31:36.87 while Ethiopia’s world silver medallist t Gelete Burka was relegated to third with 31:38.33 and her compatriot Wude Ayalew fourth in 31:39.81.

Samson Idiata won the long jump for Nigeria with 7.83m. While it was the shortest winning mark since the inaugural edition of the games in 1965, he joined his older brother Anthony in the All-Africa Games role of honour, the latter having won the high jump in 1999.

Another gold went to Nigeria in the women’s 4x400m, as they went in front on the second leg and just kept opening up an ever widening gap over their rivals before Patience George brought them home in 3:27.12, just 0.04 outside the Games record.

Egypt’s world silver medallist Ihab Abdelrahman El Sayed bounced back from a below-par performance at the IAAF Diamond League final in Brussels last Friday to win the javelin with a Games record 85.37m. Ghana's John Ampomah got the silver with a national record of 82.94m

Following their 100m double in both the men’s and women’s events, Ivory Coast also took both 200m gold medals.

Marie Josee Ta Lou was a comfortable women’s winner in 22.57 into a -1.1m/s headwind, just 0.01 short of her personal best set in the semi-finals of the IAAF World Championships, while 100m bronze medallist Wilfred Koffi was much more closely pressed in the men’s race, winning in 20.42 (-1.2m/s) and just beating Nigeria’s world junior silver medallist Divine Oduduru, who was second in a personal best of 20.45.

Ethiopia dominated the distance races on the last day as Dawit Seyaum, fourth at the IAAF World Championships, won the women’s 1500m in 4:16.69 with a devastating burst of speed from the bell.

She came home ahead of her compatriot Basu Sado, second at the African Junior Championships earlier this year, who was second again in 4:18.86 with Kenya’s Beatrice Chepkoech third in 4:19.16.

“It was very slow but I was happy with that as I knew that, with 400 metres to go, I could win the race," said Seyaum. "I came here for the win, not a fast time."

In the men’s 5000m, there was another Ethiopia one-two with Getaneh Tamira winning in 13:21.88 with team-mate Leulsi Gebresilase second in 13:22.13, the pair just edging out Kenya’s much more experienced Thomas Longosiwa, who was third in 13:22.72.

Nigeria took the gold and silver medals in the women’s 400m hurdles as Amaka Ogoegbunam ran 55.86 to beat the favourite and 2011 champion Ajoke Odumosu, who was second in 57.63.

In the morning, Eritrea’s half marathon world record-holder Zersenay Tadese didn’t need to be at his best as he took the title over his favourite distance in 1:03:11, finishing 16 seconds ahead of Kenya’s Luka Kanda.

The men’s 400m hurdles saw Abdelmalik Lahoulou of Algeria win in a national record of 48.67. Algeria also took the silver with Miloud Rahmouni in 49.27 while Tunisia's Mohamed Sghaier was third in 49.32.