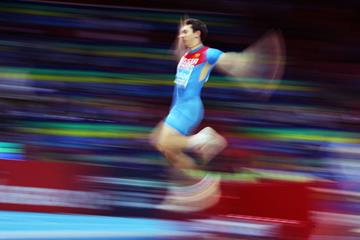 Menkov magnificent in Moscow with 8.30m leap at Russian Winter

Five 2014 world leading marks in championship events and Ethiopia’s Mohammed Aman coming close to the world best over 600m were the highlights of the Russian Winter indoor meeting in Moscow, the second of this year’s IAAF Indoor Permit meetings, on Sunday (2).

For the Krasnoyarsk-born long jumper Alexandr Menkov, the Russian capital is clearly among his favourite places to compete.

After winning at the 2013 IAAF World Championships last August, Menkov took the third Russian Winter victory of his career with a 2014 world lead of 8.30m, just one centimetre shy of his indoor best set at last year’s European Indoor Championships in Gothenburg.

He also equalled the meeting record, set by Vitaly Shkurlatov in 2000. “The (8.30m) jump came in the third round and felt surprisingly easy,” commented Menkov, who was making his 2014 debut.

“In the warm up, I felt pain in my groin and I even considered if I should compete, but the pain was not too sharp, and I decided to jump.

“This winter, I am doing mostly light training, firstly because of this small injury, and secondly because recently I have been getting lots of invitations to various public events. There has been almost no time to work out so I am really happy with an 8.30m jump in such circumstances.

“Now, I am jumping (at the IAAF Indoor Permit meeting) in Birmingham on 16 February, and then either at the national trials, or I'll go straight in Sopot.”

Kenya’s Silas Kiplagat managed to speed up towards the finish line and steal the 1500m victory from his compatriot Bethwell Birgen.

In a packed finish with less than a second separating the first four men home, Birgen was second in 3:36.10. Kenya’s Collins Cheboi and Ethiopia’s Aman Wote were third and fourth with 3:36.41 and 3:36.45 respectively.

For the second year running, the Moscow crowd arrived at the CSKA Arena hoping for a 600m world best and again they were denied.

However, Ethiopia’s reigning 800m world champion Mohammed Aman missed Nico Motchebon’s mark by only 0.19 as he clocked an African best of 1:15.31 and recorded the third-best mark of all time. Poland’s Adam Kszczot finished second in 1:15.75.

In a highly anticipated men’s high jump, Ivan Ukhov again proved he is the dominant force this winter.

Nobody else could get over the bar when it was raised to 2.31m, and then he easily cleared 2.36m before making three close attempts at a meeting record height of 2.40m, one centimetre higher than his own standard of 2.39m from 2007.

Sutej sails into the sky

Despite the fact that the focus of much of the public attention in Russia is now on the forthcoming Winter Olympics in Sochi, the Russian Winter still had full stands and one avid spectator was pole vault queen Yelena Isinbayeva, who owns the meeting record of 4.85m from 2010.

She made a special trip back to Moscow from Sochi, where she is the mayor of the Olympic village, and was rewarded by seeing Slovenia’s Tina Sutej, 2006 IAAF World Junior Championships silver medallist, beat a strong field and jump an absolute national record of 4.71m, which equalled the 2014 world lead and was 10cm higher than her own previous record which had stood since 2011.

In the women’s 400m, the organisers put the two strongest athletes in different races and, in the end, the USA’s Natasha Hastings came out on top over Russia’s Kseniya Ryzhova by a small margin, the US sprinter clocking 51.69 as against the Russian’s indoor best of 51.73.

USA’s Francena McCorory ran in the same race as Ryzhova but was far from her best and finished in 53.23.

“I am really sad I was in a different race to Hastings,” said Ryzhova. “If I could have seen her, I think I would have been able to fight for the victory, but I am still satisfied with my PB, this gives me confidence.”

Surprisingly, despite being the face of the meeting this year, in his four appearances at this meeting, Shubenkov has never won a 60m hurdles final.

This time, the world bronze medallist finished fourth in 7.64 after some technical mistakes.

France’s Garfield Darien took the victory in an indoor best of 7.53 while 2008 Olympic champion Dayron Robles was a close second in a season’s best of 7.54.

In the sprints, last-minute addition Yunier Perez from Cuba made full use of his chance to run and now heads the 2014 world lists after clocking 6.49, which also equalled Freddy Mayola’s national record from 2000.

Kenya’s 2008 Olympic champion and 2012 world indoor champion Pamela Jelimo trailed in sixth out of eight runners in the ‘A’ race over four laps of the track, finishing in a poor 2:11.29, so there has to be a question mark over whether there is enough time for her to regain her best form before the defence of her title in the Polish city of Sopot next month.

At the other end of the race, in close finish, Belarus’s Marina Arzamasova managed to come from behind in the final metres and overtake Ukraine’s Natalya Lupu, the winner clocking 2:01.31 while Lupu was just 0.02 in arrears.

Russia’s two-time European indoor long jump champion Darya Klishina usually shows good form at her home training venue, but this time had to settle for second place with a relatively modest effort of 6.51m on her third attempt

Another home favourite, 2011 world silver medallist Olga Kucherenko, came third with 6.47m while Ukraine’s world heptathlon champion Hanna Melnychenko had only one valid attempt in one of her stronger events, leaping to 6.19m.

The meeting also hosted the official farewell ceremony for former World champions Tatyana Lebedeva and Yaroslav Rybakov, who both announced the end of their careers last summer.

Natalya Maryanchik for the IAAF