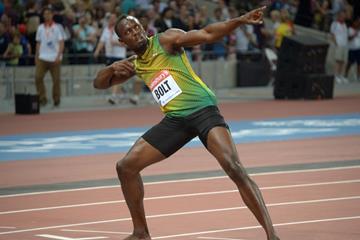 Held exactly 12 months since the London 2012 Olympic Games Opening Ceremony, and newly branded as the London Anniversary Games, the IAAF Diamond League meeting in London this year has been billed as a London 2012 encore, a come-and-see-it-all-again two-day extravaganza before the stadium shuts down for two years and is reconfigured.

Of the 11 Olympic champions on show on Friday and Saturday, two of them enjoyed ‘encore’ wins on day one, and none attracted more attention than the 100m gold medallist Usain Bolt, who crowned the evening by running his fastest 100m of the year to lay down a marker ahead of the IAAF World Championships in Moscow next month.

Bolt’s 9.85, which was achieved despite what he described as a 'horrifying' start, means that he will go to the IAAF World Championships as the quickest man in Moscow.

Even with its capacity reduced by a quarter from last summer, the stadium can still produce an awesome noise, and not surprisingly the loudest moment came when Bolt’s name was announced to the 60,000 fans.

He had made his first appearance in the stadium 20 minutes before the gun went. Wearing T-shirt and dark shades, Bolt was driven round the track on the back of a fire-spitting rocket engine but when he returned three hours later, the Jamaican needed 50 metres to get his engines firing on all cylinders.

Bolt’s reaction time was 0.175 and his pick-up left him half a stride behind the fast-starting Kim Collins, a lane to his right, and Michael Rodgers two lanes to his left.

He didn’t make up the ground until half way and took another 20 metres to edge ahead.

Once he got his nose in front though, Bolt’s finishing burst was very much in evidence. As the rest fell back, his giant strides took him across the line more than 0.1 clear.

Rodgers came through to take second in 9.98 with Nesta Carter third in 9.99 while Collins tied up and slipped back to fourth.

Bolt may have allayed a few of his own fears but he admitted there is still work to do to get back to his best before Russia.

“It’s good to be back here. I’ve got a lot of love for this stadium and this crowd,” he said. “It was nice to get the win and I’m confident going in to Moscow.”

“It (the start) was horrifying for me. I think it is just race rust and I just need to get a few races in. The rounds in the World Championships will help that and get my legs freer and a bit lighter.

The only disappointment for the British fans came before the race when sub-10 man James Dasaolu withdrew as a precaution after feeling a tight hip flexor in warm-up.

Strictly speaking, Bolt’s run was not a world lead but there was a pair of 2013 best performances from Czech Republic’s Zuzana Hejnova in the women’s 400m Hurdles and the USA’s Shannon Rowbury in the 3000m.

There was a World record attempt too, as Bohdan Bondarenko had two decent tries with the bar at 2.47m in the High Jump.

With seven straight wins behind her, Hejnova’s victory was no surprise, but the manner of it was certainly impressive, not least because Great Britain’s Perri Shakes-Drayton had a substantial lead after 200m.

Hejnova has the winning habit though, and she made up the ground around the top bend, caught the Briton with two barriers to go, and strode away to eclipse Kori Carter’s 53.21 as the best of the year, lowering the Czech record into the bargain.

Shakes-Drayton hung on for second with a personal best of 53.67, while USA’s Georganne Moline came through to beat her compatriot Carter for third in 54.32.

The race contained the world’s top five, but there’s little doubt which one is now the favourite for gold in Moscow.

“I raced well, and I’m really looking forward to the World Champs,” said Hejnova. “I have 14 days until Moscow so I will work a little bit and then I’ll be ready.”

Rowbury’s win was barely less impressive as she ran away from her compatriots Gabriele Anderson and Molly Huddle to lead a US sweep in the 3000m. Rowbury tracked Huddle down the back straight before bursting away down the finishing stretch to win in 8:41.46.

Huddle was rewarded for her break at the front 300m out with a personal best of 8:42.99 in third, although the fast-finishing Anderson came by 20 metres from home to claim second in 8:42.64.

Rowbury was delighted with her first victory of the year.

“I’m hoping this was a turning point in my season. It was a good race and my last one before Moscow. When it comes down to it in Moscow, I’m going to run like hell. I’m going to get my body ready for 12-and-a-half laps,” claimed Rowbury.

There was another striking piece of US middle distance victory in the women’s 800m, won by Brenda Martinez in 1:58.19. She blew away the rest of the field over the final 200 metres to erase Stephanie Graf’s 2001 meeting record and move into second place in the Diamond Race behind Burundi’s Francine Niyonsaba.

There was no doubt which was the leading field event on Friday night: the men’s High Jump, largely thanks again to the irrepressible Ukrainian Bondarenko who won a cat-and-mouse duel with USA’s 2012 Olympic silver medallist Erik Kynard.

The results show that the lanky Bondarenko triumphed at 2.38m, three centimetres below his world lead set in Lausanne, and he was again in superb form and might have gone over 2.43m if he hadn’t decided to have a crack at the World record instead.

The competition quickly came down to Bondarenko and Kynard as nobody else could go higher than 2.24m.

Both cleared 2.34m easily with their first attempts and were flawless to that point, Kynard then cleared 2.36m first off, so Bondarenko passed on to 2.38m which he also duly flipped over first time.

Kynard opted out of that height to aim at a stadium record of 2.40m, which would have also equalled the US record.

He was close with his third but couldn’t prevent Bondarenko notching up his fourth Diamond League win of the season, giving him a six-point lead over Qatar’s Mutaz Essa Barshim.

Bondarenko then went for broke. Having just missed 2.43m, clipping the bar with his heels, he then audaciously put the bar up to 2.47m, two centimetres above Javier Sotomayor’s World record just a day short of 20 years since the Cuban’s great leap upwards and over 2.45m.

He brought the bar down with his shoulder on the first go, and then with his backside on the second, but his attempts have already given him confidence for the future. “I feel I will get it in Moscow,” he said.

Suhr took second with 4.73m, although she had two goes at 4.88m, with Murer third at 4.63m, reversing their positions from Birmingham last month.

The 2012 Olympic Games silver medallist is now out on her own at the top of the Diamond Race, ahead of Suhr and Silke Spiegelburg. The German was fourth here, also with 4.63m.

Bolt wasn’t the only Jamaican sprinter reliving London 2012 glories, for Olympic bronze medallist Warren Weir led compatriot Jason Young to the 200m line in 19.89, as both men dipped under 20 seconds.

Weir’s win moves him above Bolt in the Diamond Race and put him in mind to challenge the champion in Moscow.

“It was exactly what I wanted to do,” said Weir. “It’s a very fast time going to Russia. I am confident going into the World Champs that I can run my race and win.”

Kirani James produced a well-paced piece of 400m running to become the only other London 2012 winner to repeat his Olympic victory on Friday.

The Grenadian allowed the USA’s Tony McQuay to take the lead through 200m, before closing around the bend and easing away down the straight to cross the line in 44.65 as McQuay held on for second in 45.09.

Diamond Race leader Robert Harting was missing from the men’s Discus, and in the German’s absence, Piotr Malachowski took the opportunity to move to the top of the standings.

The Polish world leader enjoyed something of a return to form after recent modest results with a winning throw of 67.35m, although that is still some 4.5m short of his 2013 best.

Malachowski had another throw of 67.04m while Germany’s Martin Wierig was second with 66.60m, and Estonia’s 2008 Olympic champion Gerd Kanter third with 66.29m.

Kenya’s Mary Kuria sneaked through on the inside to win a four-way finish in the women’s 1500m in 4:08.77 from Morocco’s Ibtissam Lakhouad.

Ashleigh Nelson brought the baton home in the women’s 4x100m relay to give Great Britain the victory in 42.69, the quickest British women’s time for 12 years, to beat an All-Stars line-up featuring USA’s Deedee Trotter and Jamaica’s Aileen Bailey.