Larissa Iapichino broke the world U20 indoor record (pending ratification) in the long jump with a leap of 6.91m at the Italian Indoor Championships in Ancona on Saturday (20).

With her fifth-round leap, Iapichino, 18, added three centimetres to the mark set by Heike Drechsler in 1983, 19 years before the Italian teenager was born. Iapichino also equalled the senior national indoor record set by her mother, Fiona May, which propelled her to the 1998 European indoor title. It's also better than her outdoor career best of 6.80m set last year and is the farthest jump in the world in 2021.

Iapichino, who kicked off her season with a then-personal best of 6.75m at the national U20 championships two weeks ago, opened the competition with a 6.68m effort in the first round, then reached 6.75m in both rounds three and four before her record leap in the penultimate round. She then passed on her final attempt.

On the second day of the Italian Indoor Championships, 2016 world indoor champion Gianmarco Tamberi won the men's high jump with a world-leading 2.35m - his best leap since July 2016.

The 28-year-old had first-time clearances over every bar up to and including that height. He ended his series with three tries at 2.38m, all of which were unsuccessful, but he was still delighted with his performance.

"This 2.35m is worth a lot to me; not just because of that extra centimetre on the 2.34m from four days ago, but because of the way I achieved it," said Tamberi.

"Today’s jump sheds some light and makes me hope for good things. The past few years have been very difficult, but today’s performance means we have closed that parenthesis. I have finally become the athlete I wanted to be after the injury."

Having stood for 12 years, the Italian indoor heptathlon record was finally broke – by two men.

Dario Dester, aged just 20, emerged as the national record-holder after a two-day tussle with his more experienced compatriot Simone Cairoli, who shot to internet fame last year thanks to his ‘quarantine decathlon’ video.

Cairoli took an early lead after clocking 7.00 in the 60m and leaping a PB of 7.73m in the long jump, but a 14.03m heave in the shot put moved Dester into the lead after the third event. In the high jump, Cairoli cleared 2.04m to Dester’s 2.01m, which gave Cairlo a 14-point lead at the end of the first day.

Dester, however, is a stronger performer on the second day and he showed that with an 8.13 clocking in the 60m hurdles and a 5.00m clearance in the pole vault. Cairoli performed well, running 8.33 and setting a pole vault PB of 4.80m, but he trailed his younger compatriot by almost 100 points going into the final event.

Record-breaking sprints in Dortmund and Apeldoorn

The 60m finals produced the highlights of the German Indoor Championships in Dortmund.

Amelie-Sophie Lederer twice smashed her PB en route to winning the women’s 60m. She won her heat in 7.20 and then reduced her lifetime best to 7.12 to win a high-quality final in which the top seven women finished inside 7.30. Jennifer Montag and Yasmin Kwadwo, both rewarded with PBs of 7.19, finished second and third respectively.

Dutch sprinter Femke Bol trimmed her 400m PB once again to take victory at the Dutch Indoor Championships in Apeldoorn.

The hurdles specialist followed training partner Lieka Klaver through the first 200m and then, as had happened at the World Athletics Indoor Tour Gold meeting in Torun earlier in the week, Bol moved into the lead on the back straight. Klaver was able to stay closer to Bol on this occasion, but the victory was still comfortable as Bol crossed the line in 50.64. Lieke finished second in 51.21. 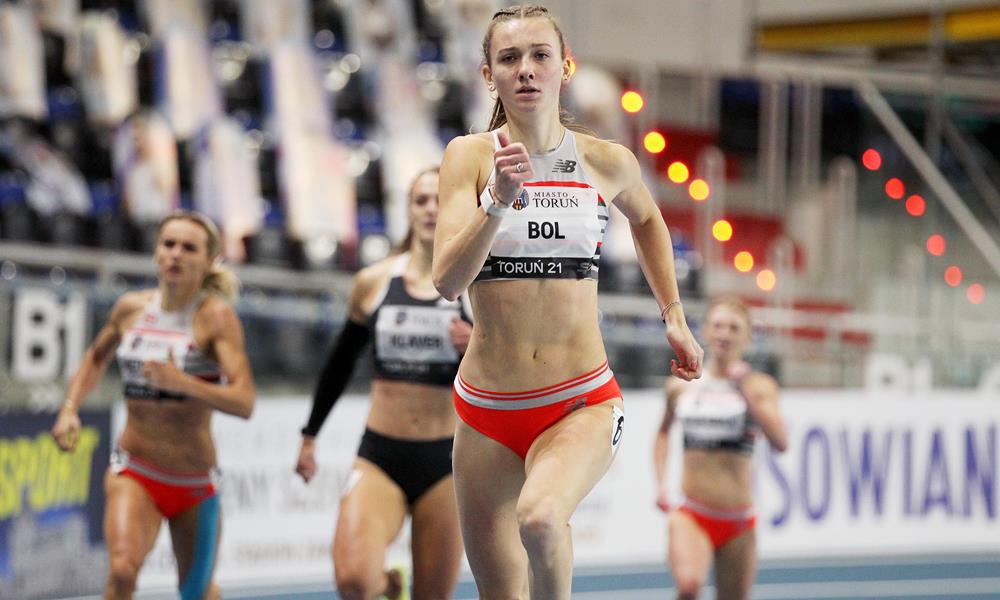 The Dutch record also fell in the men’s 400m. Liemarvin Bonevacia, holder of the national outdoor record, won in 45.99. Tony Van Diepen, who previously held the Dutch indoor 400m record, was second in 46.17, just 0.04 shy of his best.

European indoor champion Nadine Visser won the 60m hurdles in 7.90 with Zoe Sedney taking second place in a PB of 7.98. 2016 European heptathlon champion Anouk Vetter was third fastest overall with 8.29. 24 hours prior, Vetter won the long jump title with a PB of 6.42m.

The world bronze medallist from Burkina Faso bounded out to 17.17m with his first attempt and it remained the leading mark of the day – but only just, as Melvin Raffin jumped 17.09m to finish second.

One of the biggest surprises of the championships came in the women’s 60m hurdles. Laeticia Bapte won her heat in a PB of 8.10 and then took another chunk off that time to win the final in 7.93. Cyrene Samba-Mayela was just a fraction behind in a PB of 7.94.

Field eventers produced most of the highlights at Britain’s European Indoor Selection Trials, which were held across three different venues - Manchester, Loughborough and Lee Valley - on Saturday and Sunday.

Elsewhere in the field events, world finalist Sophie McKinna extended her indoor PB to 18.54m to win the shot put, while Morgan Lake cleared 1.93m to win the high jump.

Ewa Swoboda showed her preparations for her European indoor title defence are heading in the right direction by winning the 60m title at the Polish Indoor Championships in Torun.

The 23-year-old stopped the clock at 7.10, the fourth-fastest time of her career and just 0.01 shy of the time she ran to win the European indoor title two years ago.

Remigiusz Olszewski won the men’s event in 6.59, while Damian Czykier clocked a season’s best of 7.59 to win the men’s 60m hurdles.

There was drama in the men’s middle-distance races. World bronze medallist Marcin Lewandowski just about held off a strong challenge from Michal Rozmys to win the 1500m by 0.12 in 3:40.14. Rozmys then went on to win the 3000m one day later, clocking 7:58.78.

Patryk Dobek – better known as a 400m hurdler, having reached the 2015 World Championships final in that discipline – upstaged world indoor champion Adam Kszczot to win the 800m in 1:47.12 to Kszczot’s 1:47.35. Dobek’s first race at the distance was just a few weeks ago. He failed to finish his first attempt, but clocked 1:47.23 a few days later. Now, in just his fourth attempt at the distance, he has beaten a global champion.

Maria Vicente broke her own national record in the pentathlon at the Spanish Indoor Championships in Madrid.

Silvan Wicki broke the Swiss record to win the men’s 60m at the Swiss Indoor Championships in Magglingen. The 26-year-old, who won the Swiss titles over 60m and 100m last year, retained his crown in 6.59.

Two-time European indoor medallist Mark English held off promising youngster Cian McPhillips to win the 800m at the Indoor Micro Meet in Dublin. The 27-year-old had to produce the indoor performance of his life just to win, setting an Irish indoor record of 1:46.10. McPhillips was a close second in a national U20 record of 1:46.13 – a time that takes him to sixth on the world U20 indoor all-time list.

Teenagers were in record-breaking form at the Norwegian Indoor Championships in Bærum this weekend.

He becomes just the second man in history to surpass 6000 points for the U20 heptathlon – just one week after Belgium’s Jente Hauttekeete became the first to achieve the feat,

In other indoor action, Lotta Kemppinen broke her own national record to win the women’s 60m at the Finnish Indoor Championships in Jyvaskyla in 7.16.

Britain’s Marc Scott and USA’s Elise Cranny were among 10 athletes to secure Olympic qualifying performances over 10,000m at The Ten meeting in California on Saturday (20).

Steeplechase specialist Evan Jager paced the men’s race to half way, reached in 13:45, then training partner Sean McGorty took over the pacing duties for the next three kilometres, reaching 8000m just inside 21:58.

Scott – closely followed by Grant Fisher, Ben True, Woody Kincaid and Kieran Tuntivate – started to push the pace for the final two kilometres. Fisher briefly took the lead with just a couple of laps to go, but Scott responded with a 57.13-second final 400m to win in 27:10.41.

His winning time makes him the second-fastest Briton ever behind Mo Farah and places him third on the European all-time list.

The negative splits in the women’s race were even more pronounced. Paced by Courtney Frerichs to half way in 15:38, the pace started to pick up in the second half with Britain’s Eilish McColgan leading the way until about 8000m.

With two kilometres to go, Cranny moved into the lead before Karissa Schweizer led for a couple of laps. But Cranny regained the lead on the final lap and kicked to victory in 30:47.42, finishing 0.57 ahead of Schweizer. The duo now sit at third and fourth respectively on the North American all-time list.