In one of the most dramatic comebacks of recent athletics history, Yelena Isinbayeva, who no heighted in the final at last week's 12th IAAF World Championships in Athletics in Berlin, this evening improved her World Pole Vault record (5.05m set in Beijing last summer) with a first time clearance at 5.06m* at the Weltklasse Zürich, the fifth of the six meeting ÅF Golden League 2009 series.

Three continue in the US$1 Million Jackpot hunt

As well as Isinbayeva’s pinnacle performance, there were four other 2009 world leads tonight; nine Berlin champions won while another five fell at their first post championship hurdle. In the ÅF Golden League US$1 Million Jackpot stakes three of the four aspirants made it through to the sixth and final challenge in Brussels next Friday (4 Sep).

Isinbayeva’s World record victory kept her in the hunt for the $1 Million, but that goal was already achieved after her first time clearance at 4.81 (also first time clear at her opening 4.71) which comfortably defeated the best that World champion Anna Rogowska of Poland - 4.76 on the second attempt - could manage for second place. Brazil's Fabiana Murer was third, 4.71m.

Isinbayeva’s clearance of the 5.06 bar was more than impressive, and it would not be a surprise if the record goes higher before this season is out. The Russian spurred on by her Berlin despair was energised in a fashion which we haven’t seen before from the 27-year-old this year. If ever a World record was forged in the emotion of defeat tonight’s 5.06 was it.

“My biggest thanks go to my coach Vitaliy Petrov,” said Isinbayeva. “He gave me the best advice after what happened in Berlin. There were also other people who trusted me and said ‘not to worry, everybody can lose a competition’.”

“It was interesting that I did not feel any pressure coming into today’s competition. I knew I was in good shape, and this World record confirms that I’m here and ready to jump high.”

105 minutes before the men’s 100m ‘A’ race during the opening ceremony ‘parade of champions’, who in this eco-friendly age were pulled around the track in rickshaws, Usain Bolt, as relaxed and as full of energy as ever, exchanged places with his driver for 100 metres of his circumference of the stadium. The World record holder’s turn of speed on the top bend indicating that should ever the sprinting work dry-up he has a new profession in the waiting! Forget the Long Jump Usain, ‘Rickshaws R’ Us’!

After roughly 80 metres of the 100m it looked as if the World and Olympic champion’s legs might have been left jaded by his earlier taxi service but no, as despite Asafa Powell still being ahead at that point Bolt did not disappoint and came away clear to record a 9.81 sec success. Powell despite tying up a little in the final metres still produced 9.88 for second place, and two others went below 10sec – Darvis Patton (9.95) and Michael Rodgers (9.98).

Bolt admitted his early race display was lackluster by his standards: “it was alright, I would say this was a shaky race. My body was sitting at the start, I was a little bit tired through the race. But again, it’s alright. All things considered, the time is not bad. I need to pick up my speed as my body did not respond well to the race.”

Powell realised he had let a good opportunity slip: “I just need to work more on the last part of the race. Now I know that I can also beat Usain when everything works out fine for me.”

The evening was to conclude with another outstanding Bolt finish, bringing home a Jamaican squad in the Zürich Trophy 4x100m in 37.70 secs, and if that performance didn’t excite the Letzigrund stadium crowd enough a few moments later the cheering erupted once more when it was declared that the Swiss quartet in sixth had set a national record (38.78).

Richards and Bekele continue in Jackpot with world leads

In the women’s one lap, Sanya Richards in lane 3 was away well from the gun but so was Allyson Felix in 6, who approaching the 200m had already made up the stagger on the two athletes outside her. Exiting the final turn though Richards was already in close contention with the three-time World 200m champion and she powered away to the first sub-49 clocking of the year, improving her world lead (49.00 in Berlin) to 48.94sec. It was the third time in her career that Richards has ducked under 49secs barrier. Felix in second did not tie up much and clocked an excellent season’s best of 49.83.

Bekele was not to be outdone and a solo last kilometre in the men’s 5000m brought the Ethiopian World record holder home in 12:52.32, knocking just under four seconds off his 2009 best which he set in Rome on 10 July. While one of his usual challengers Edwin Soi came in runner-up (12:55.03), the Kenyan had been closely pursued by the surprise of the night USA’s 26-year-old Dathan Ritzenhein whose 12:56.27 finally wiped away the long standing Area record of compatriot Bob Kennedy (12:58.21) set here in Zurich on 14 August 1996. Before tonight’s race Ritzenhein’s best had been 13:16.06!

“Of course it’s good to remain in the Jackpot but I wanted a faster time today,” said Bekele.

Kerron Stewart was the one Jackpot contender to lose out this evening, but the World silver medallist’s vanquisher was not the expected Shelly Ann Fraser, the World and Olympic champion, but USA’s Carmelita Jeter, who was the third place finisher behind these two Jamaicans last week in Berlin. The American obviously had a lot of angst to vent, and vent she powerfully did with a 10.86 sec 100m dash that made them into ‘also rans’ tonight; Stewart and the Bahamas' Debbie Ferguson-Mckensie clocking 11.04, split on the camera for second and third, and Fraser fourth (11.10).

Thorkildsen and Foster-Hylton show why they are champions

It wasn’t just Isinbayeva, Richards and Bekele who were topping the 2009 world lists this evening, as two of their fellow Berlin gold medallists also discovered extra power.

The most dominant was World, Olympic and European Javelin Throw champion Andreas Thorkildsen who sent his spear soaring in the second round to 91.28m, which demolished the world season’s lead of Latvian Vadims Vasilevskis (90.71m /23 May) and came tantalizingly close to the Norwegian’s PB of 91.59 (2006), which currently positions him as the sixth furthest thrower of all-time.

Thorkildsen is a laid back character at the best of times much in the mould of Usain Bolt, and he’s been an extremely jovial relaxed figure in the meet hotel in the last few days and that ease transferred onto the runway this evening. It’s clear that, backed-up by his first round 88.13m, there is no one currently in his class and before very long the double Olympic champion should quickly start again to ascend the all-time list.

There was only one other world class javelin performer tonight and that was Finn Antti Ruuskanen who produced 85.39m in the fifth round to take second.

“I felt something special coming today in the stadium,” said the Norwegian World champion, “and all went great, I knew I had such a throw in me, I just could not do it. I already had the feeling before the season started then I was injured and unable to fulfill my potential.”

There was also a world season lead from newly crowned World champion Brigitte Ann Foster-Hylton in the women’s 100m Hurdles which did a lot to cement our understanding that the 34-year-old Jamaican has really at last made the top global championship grade. Her determined run showed the mark and grit of the gold medallist she now is, her 12.46 sec just enough to hold off a faster finishing Dawn Harper of the USA, who is the Olympic champion. These two were well clear of the field with 2003 World champion Perdita Felicien of Canada leading the rest home in 12.61.

Resounding success for Rudisha and Kemboi; Jamal holds on

The men’s 800m saw European champion Bram Som head the field behind the last pacemaker into the second lap with David Rudisha, Yuriy Borzakovskiy, and World champion Mbulaeni Mulaudzi in close order behind the Dutchman. The same composition prevailed as the race entered the last 100 metres, and it was then that Rudisha applied top gear which took him home to victory in a PB of 1:43.52.

Coming home with a characteristic late attack was Alfred Yego, the 2007 World champion who had taken silver in Berlin, who powered past all but the eventual winner finishing second in his career best of 1:43.66, with Mulaudzi the man who beat him in Berlin, third in 1:44.03; Som hung on for fourth (1:44.10).

Three went under 4mins in the women’s 1500m and after the bumping of Berlin it was lovely to see a clean cut fight which culminated in a close call victory for double World champion Maryam Jamal in 3:59.15 in what amounted to a blanket finish with USA’s Anna Willard  - 3:59.38 PB, now the third fastest American of all-time - and Britain’s Lisa Dobriskey (3:59.50).

World champion Ezekiel Kemboi was on top again in the 3000m Steeplechase, a 8:04.44 victory achieved with an exhilarating turn of speed which held at bay France’s Berlin bronze medallist Bob Tahri who crossed in 8:05.29. Fourth at the Worlds but third here was Paul Koech (8:06.10)…back in sixth Finland’s Jukka Keskisalo, the reigning European champion, at last beat the 33-year-old national record (8:12.60), improving his PB from 8:12.93 to 8:10.67.

Kemboi whose return to the top of the Kenyan and of course global hierarchy this year has been a revelation commented: “I want to stay on the top as long as I can…the win in Berlin improved my shape mentally. I’m on a high. I hope to continue and try for another fast time in Brussels.”

Thomas takes it from Trammell

It looked like it would be Terrence Trammell’s race tonight as he led from the gun to around 5 metres before the line of the 110m Hurdles, but closing him down in the inside lane was former flat sprinter Dwight Thomas whose 13.16 sec run was good enough not only to pip the American World championship silver medallist but also to set a Jamaican national record of 13.16. Trammell was second in 13.17, well ahead of surprise Berlin gold medallist Ryan Brathwaite, who was never really in contention (13.27).

It was very much ‘after the party’ for the women’s High Jumpers who had provided one of the highlights of Berlin’s show last week. Only World champion Blanka Vlasic could manage to go above 2m, and with her first time clearance she gave what then seemed to be a premature victory wiggle, it wasn’t quite the usual full dance of celebration but it might as well have been, as no one else was to come close to that height with Anna Chicherova, the Berlin silver medallist, and Chaunte Howard split on count-back at 1.98, and Ariane Friedrich, the World bronze medallist no better than 1.94 for fourth on this occasion.

Vlasic summed up the feeling of many this evening: “I’m emotionally empty after Berlin. I wasn’t too fresh.”

As per schedule World and Olympic champion LaShawn Merritt won the men’s 400m, with Jeremy Wariner giving a good fight for 360 metres of the race before his nemesis pulled himself clear to a 44.21 win. There has been a similar script every time they have met this season. Wariner was second, 44.62, and Trinidad’s Renny Quow, third in 44.77.

In the absence of his Berlin vanquisher Phillips Idowu, Portugal’s Olympic champion Nelson Evora was back on top in the Triple Jump with a 17.38m victory, while in the men’s 1500m Augustine Choge’s 3:33.38 was more than a match for the tired legs of Berlin champion Yusuf Saad Kamel, fourth in 3:34.33. Second was Mansoor Ali (3:33.74) and Asbel Kiprop was third, 3:34.09. 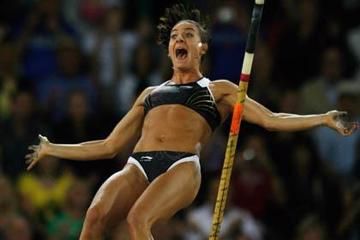