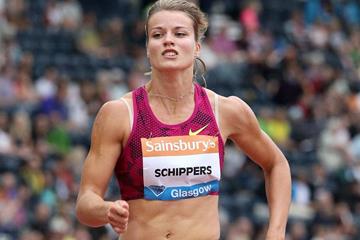 Dutch sprinter Dafne Schippers had a day to dream of at the Sainsbury’s Glasgow Grand Prix, part of the 2014 IAAF Diamond League, setting two national records in the space of two hours to light up a damp and cool Hampden Park stadium on Saturday (12).

She scorched to victory in the women’s 200m in 22.34 ahead of Olympic champion Allyson Felix and Nigeria’s Diamond Race leader Blessing Okagbare just two hours after winning the 100m B race in 11.03.

Schippers took 0.01 from her own Dutch best over 200m as she came from behind down the home straight to overhaul the long-striding Felix in the last 20 metres, having earlier beaten Tianna Bartoletta by 0.04 in the 100m.

“Obviously, I was a little bit tired after the first race but I know I can run faster when I’m tired. I’m 22 and I have won a Diamond League event, and that is not normal. I’m so happy with that. It is amazing to be running alongside the likes of Allyson Felix.”

Felix, wearing long fluorescent yellow socks, as if to show off her graceful style, looked a certain winner as she came into the straight a metre ahead of Okagbare.

She held off the Nigerian but the powerful Schippers beat her to the line by 0.01.

Okagbare was third in 22.41. Behind the principal trio, there was good news for British fans as 2010 world junior 100m champion Jodie Williams took another chunk from her best in the longer sprint to finish fourth in 22.60.

Queen reigns in the hurdles

The sprinting straight witnessed another majestic performance when Queen Harrison glided over the barriers to win the 100m hurdles in 12.58. Harrison pulled away early and had daylight to spare at the end.

She won by a full tenth from Lolo Jones, with Olympic champion Sally Pearson a distant third in 12.87, the Australian’s best of this summer season.

Harrison duly moves ahead of Dawn Harper-Nelson in the Diamond Race, the woman who beat her to the US title last month.

However, Pearson’s performance will be good news for Australian fans as she finished ahead of Britain’s Tiffany Porter, her main rival at the Commonwealth Games to be staged at the same venue in three weeks’ time.

“For me, it’s all about wearing the gold and green,” said Pearson. “But the Commonwealths will be tough because Tiffany is in such great form.”

A huge lifetime best of 86.99m in the last round secured a shock victory for Germany’s Thomas Rohler in the men’s javelin, the best of the day’s field events.

Rohler, whose previous best was 84.74m, pushed Czech Republic’s world champion and long-time leader Vitezslav Vesely into second with a throw that will make him one of the favourites for a medal at the European Championships next month.

“It was perfect for me today,” said Rohler. “Great conditions for the javelin with the rain. When I arrived yesterday, it was really sunny and I thought this can’t be Britain.”

Vesely’s best was 85.23m from the first round while Finland’s former world champion and Moscow 2013 silver medallist Tero Pitkamaki was third, throwing 84.95m with his sixth effort.

There was a last-gasp win in the triple jump too as Christian Taylor got the better of Will Claye with a sixth-round jump of 17.36m.

Claye had won their first four encounters this year, but Taylor triumphed in their last clash in Paris earlier this month. In Glasgow, Taylor was on the verge of taking the runners up spot as he trailed Claye’s 17.27m going into the last round. However, the Olympic champion, who had leapt 17.08m in the fifth round, found his rhythm at the end to land just one centimetre short of his season’s best. “It’s nice to get the win, it’s been a long time,” said Taylor.

Sandra Perkovic may have been surprisingly beaten on Friday evening, but Blanka Vlasic at least gave Croatia one victory this weekend as she took the maximum points in the high jump points for the second meeting in a row to top the Diamond Race standings.

Vlasic was the only woman over 1.96m, a clearance which prompted a trademark wiggle from the two-time former world champion.

Fabiana Murer restored a modicum of sporting pride to Brazil with her second IAAF Diamond League pole vault win of the season.

The 2011 world champion leads the world this year with 4.80m but topped out at 4.65m, her first-time clearance enough to beat Ekaterini Stefanidi and Olympic silver medallist Yarisley Silva on count back, while the USA’s Olympic champion Jennifer Suhr bowed out with a best of 4.55m.

Michelle-Lee Ahye followed up her 100m win in Lausanne with another victory against the world’s best here, albeit in a non-Diamond League event.

The Trinidad and Tobago athlete is this year’s fastest woman with 10.85 and the 22-year-old showed her class again, clocking 11.01 to beat double Olympic champion Shelly-Ann Fraser-Pryce by 0.09.

Kenya’s Silas Kiplagat broke Kip Keino’s Scottish all-comers’ record when he won the men’s 1500m in 3:32.84, while Ajee Wilson looked effortless in striding away from the field to win the women’s 800m in 1:59.68.

The men’s long jump started with the news that Great Britain’s Olympic champion Greg Rutherford had withdrawn after injuring his knee during warm-up but US champion Jeff Henderson made the most of his absence, winning with 8.21m, the only man to go over eight metres in the competition.

Henderson is still unbeaten outdoors this summer and now has nine consecutive wins. His last last loss was at the IAAF World Indoor Championships.