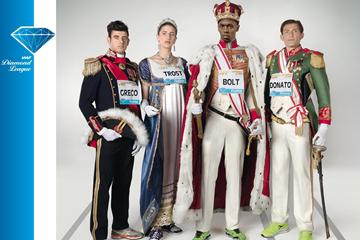 As befits a meeting dedicated to the memory of Italian sprint legend Pietro Mennea, the spotlight falls firmly on the men’s 100m and Usain Bolt at Rome’s Golden Gala, the first European stop for the 2013 IAAF Diamond League, on Thursday (6).

The Jamaican will have his first European outing of the year in the famous Olympic Stadium, where he set a meeting and venue record of 9.76 a year ago, and there is huge anticipation to see the great man in the flesh and witness him in action.

“Having Usain Bolt at this meeting is a great investment. We anticipate around 45,000 spectators and, of those, we estimate that around 10,000-15,000of those are people that would not be regular watchers of athletics,” commented the Golden Gala Meeting Director Luigi D’Onofrio on Wednesday.

“Usain grabs the attention of people who would not normally be fans,” he added.

Of course, the 100m will not be just a one-man race against the clock. There will be eight other men going to their marks in the Olympic Stadium, which was one for the first stadiums in the world to install a ninth lane in the home straight.

The most notable of these is the USA’s London 2012 Olympic Games bronze medallist Justin Gatlin, who is unbeaten in his four 100m races so far this year, including victories at the IAAF Diamond League meetings in Doha and Eugene.

Gatlin gently turned up the temperature on Wednesday by saying that he had come to the Italian capital to cause an upset, despite having to endure two cancelled flights to get to Rome.

"If I didn't think so, I would have definitely gone home after the first cancelled flight," said Gatlin. "My season has been going really good, from Beijing to Shanghai to Doha and hopefully I can keep that streak going."

However, he put little store in the fact that Bolt looked less than in lightning shape in his only 100m race so far this season, when he ran 10.09 in the Cayman islands on 8 May.

"You never know what to expect from a guy with the calibre of Usain Bolt,” added Gatlin. "He can run a 10.0 two weeks before then come out running a 9.7, so you just have to prepare for that 9.5 anytime you run against him."

The IAAF Diamond League though isn’t just about one race, and each of the 16 events in Rome that are part of their own Diamond Races exudes quality.

After his 5.95m clearance in Eugene last Saturday, there is optimism that French pole vaulter Renaud Lavillenie can improve one of the longest standing meeting records, the 5.94m mark that has stood to Sergey Bubka since 1984, when it was also a World record.

The women’s High Jump brings together Russia’s Anna Chicherova and Croatia’s Blanka Vlasic who have, between them, won the last three outdoor World Championships.

Chicherova currently leads with world with the 2.02m she jumped in Beijing last month while Vlasic showed that she is on the road to recovery after missing all of 2012 due to injury and infection by winning in wet conditions at the recent IAAF Diamond League meeting in New York.

The 2012 World junior champion was the dominant figure during the indoor season and the only women in the world to clear 2.00m under cover but suffered a meltdown at the European Athletics Indoor Championships when, by her own admission, she struggled with the pressure of being the gold medal favourite.

Among the 30 London 2012 Olympic Games medallists in Rome is the 200m winner Allyson Felix and the American goes over the same distance, in which she clocked 22.36 in Beijing last month, her one previous outing around the bend this season.

Another Olympic champion in action will be the USA’s London Long Jump winner Brittney Reese, who faces the other women who made the Olympic podium last summer: Russia’s Yelena Sokolova and USA’s Janay DeLoach Soukup, as well as Russia’s current European indoor champion Darya Klishina.

Reese jumped a personal best of 7.25m at the opening IAAF Diamond League meeting in Doha last month, the best jump in the world this year, and believes she can go further in Rome, where the stadium record is the 7.36m that her compatriot Jackie Joyner-Kersee reached to win at the 1987 World Championships.

Felix and Reese’s compatriot and fellow London gold medallist Christian Taylor has struggled to find the same sort of superlative performances in the Triple Jump that characterized his 2012 outdoor season but believes that the summer really starts here for him on the road to defending his global crown in Moscow in August.

“I don’t want to talk about 17.90s or 18 metres. At the moment I’m just thinking about jumping further than 17.25 (his winning distance in Doha),” commented the affable Taylor, who is now based for much of the year in England.

The Triple Jump will be the focus of plenty of attention from the crowd as it features another of the new heroes of Italian athletics, 2013 European Athletics Indoor Championships gold medallist Daniele Greco, who memorably bounded out to 17.70m to win in Gothenburg just over three months ago.

Into the bargain, the event features the return to big-time competition of France’s World indoor record holder Teddy Tamgho after missing all of 2012 through injury.

The three IAAF Diamond League throwing events in Rome can also boast of a myriad of Olympic medallists.

The men’s Shot Put reunites the one-two-three from London: Poland’s Tomasz Majewski, Germany’s David Storl and the USA’s Reese Hoffa; while the women’s Discus sees Croatia’s Sandra Perkovic in action and looking to improve on the world-leading 68.48m she threw in far-from-helpful conditions in New York last month.

This event is just one of six IAAF Diamond League disciplines that is repeated in Rome from 12 months ago and there will be a little toast to an absent friend as the Czech Republic’s Olympic champion Barbora Spotakova, who won a thrilling competition last year, gave birth to a son Janek two weeks ago.

Behind Spotakova in Rome 12 months ago was South Africa’s Sunette Viljoen, and the 2011 World Championships bronze medallist would be happy if she can repeat her result from 2012 when she threw 67.95m.

Can Abegawi go even faster?

It was the first time since 2006 that three women had beaten 3:58 in one race and D’Onofrio has contracted the trio for a potentially thrilling re-match over the same distance.

Doha also saw a terrific women’s 3000m Steeplechase in which six women went under 9:20 and the first five from that race, which Kenya’s Lydia Chepkurui won in a personal best and a world-leading time of 9:13.73, will be on the start line in Rome.

The Olympic Stadium is also no stranger to fast 5000m races, Moses Kiptanui set a World record of 12:55.30 here in 1995, so lots of people are wondering just how fast Ethiopia’s new distance sensation Hagos Gebrhiwet can go.

There’s no David Rudisha in the men’s 800m which makes Ethiopia’s Mohammed Aman the favourite over two laps of the track and the teenager was an impressive winner in Eugene last Saturday.

Another Eugene winner to climb straight on the plane to Europe is Botswana’s 2011 World Championships 400m gold medallist Amantle Montsho, who will be looking to extend her 2013 unbeaten streak over one lap of the track to five races.