Yohann Diniz shattered the world record* in the 50km race walk on the fourth day of action at the European Championships in Zurich on Friday (15).

Despite the damp and chilly conditions and regular bursts of rain, day four also featured two other world-leading performances and plenty of dramatic head-to-head competitions.

Racing across wet streets and battling strong early morning rains, the 36-year-old Frenchman broke the tape in 3:32:33 to knock nearly two minutes from the previous record of 3:34:14 set by Russian Denis Nizhegorodov in Cheboksary in 2008.

“This is the best day of my life,” said Diniz, who crossed the line carrying both the French and Portuguese flags, the latter in dedication to his Portuguese grandmother who passed away earlier this year.

But his race walking tour through the streets of Zurich will certainly prove more memorable. With the victory, Diniz became the first man to win three successive European titles over the distance.

“A third European title, it is like in a dream,” he said. A very fast-paced one at that.

Diniz had Mikhail Ryzhov, the world silver medallist, for company in the early stages, assistance that proved pivotal in his record-setting performance. With Diniz close in tow, Ryzhov led through the first 10 kilometres in 43:44. Diniz returned the favour, leading the pair through 20km in 1:26:55.

The Russian kept the pace up and the pressure on, reaching 30km in 2:09:20, six seconds clear of the Frenchman. But by 40km (2:51:12), the roles were again reversed with Diniz on fire with a 39-second lead and Ryzhov clearly struggling.

With the victory all but secure, Diniz forged on alone before entering the record books.

Meanwhile, as Diniz closed in, Ryzhov paid for his punishing fast early pace. Three hours and 19 minutes into the race, he was passed by Slovak Matej Toth and soon after, in the 48th kilometre, Ryzhov’s team-mate Ivan Noskov moved by to secure the bronze.

“Before I came here, I knew I was in a good shape but what helped me a lot was the Russian guy Ryzhov who started with very fast pace,” said Diniz. “I feel sorry for him that he could not keep up with us but it helped me to achieve the record.”

Competing in his sixth European Championships at the age of 44, 1993 world champion Jesus Angel Garcia finished eighth in 3:45:41, his fastest time since winning world bronze in 2009.

The European Championships was the last fixture on the calendar in the IAAF Race Walking Challenge. Ukraine's Ruslan Dmytrenko, who won the IAAF World Race Walking Cup and took the bronze medal in the 20km her in Zurich, tops the overall standings, while China's Liu Hong leads the women's.

Not to be outdone, Anita Wlodarczyk nearly added to the world record count in the day’s final event, the women’s hammer throw, with her successful title defence.

Controlling the competition from the third round, the former world record-holder unleashed a 78.76m effort in round five, the third-farthest throw in history and 2014 season leader. The Pole backed up her solid form with a 75.88m throw in round three and 76.18m in the fourth.

“I am very happy with the national record. It has been a tough season, with my injury which made me miss the first half out the outdoor season,” said Wlodarczyk, the 2009 world champion whose previous personal best was 78.46m.

Martina Hrasnova of Slovakia was a distant second with a 74.66m best while Wlodarczyk’s team-mate Joanna Fiodorow overtook German Katrin Klaas for the bronze with a 73.67m final-round effort.

Despite the cold conditions, 22-year-old Dafne Schippers powered to an overwhelming victory in the 200m with an impressive world-leading 22.03 dash, the fastest by a European woman since 1995 and a performance that just might make her think twice about leaving the sprints after this season concludes.

“A world-leading mark is something unbelievable after so many starts I have already had. 22.03, I did not even dream of it,” said Schippers, who became the tenth woman to capture the European sprint double, emulating the feat of Dutch legend Fanny Blankers-Koen, among others.

Clearly ahead some 70 metres into the race, Schippers came off the bend and powered down the straight resembling more a seasoned half-lap veteran than a young heptathlete who has focused on the event for just one season.

Jodie Williams of Great Britain, the 2010 world junior 100m champion, finished strong to take silver with a 22.46 personal best, with Myriam Soumare, the 2010 champion, taking a second successive bronze in this event with 22.58.

There was a strong performance in the men’s race as well, courtesy of rising British star Adam Gemili, training partner of 100m champion James Dasaolu.

Like Schippers, Gemili dominated the race from the gun and powered home unchallenged to a 19.98 victory, his second foray into sub-20 second territory and equalling his personal best.

Christophe Lemaitre, the 2010 winner, took his second silver of the week in 20.15, well clear of Serhiy Smelyk of Ukraine, who clocked a 20.30 personal best.

In terms of shock, awe and pure entertainment, the men’s 800m was the race of the night where Adam Kszczot led an unlikely 1-2 finish for Poland.

Pre-race favourite Pierre-Ambroise Bosse of France took the early lead, heading to the front immediately after the break. He held firm through the bell, even increasing his lead as he entered the back straight. But behind him things began to shuffle as he began to unravel.

Kszczot moved up from fourth to third midway through the back straight and then made his big move for the lead with 120 metres remaining, passing Bosse and powering alone into the final straight. Nobody challenged the 24-year-old, who went on to take a solid victory in 1:44.15.

Bosse meanwhile paid dearly for his early solo effort as runner after runner passed the Frenchman, who would eventually fade to last. Finishing best was another Pole, Artur Kuciapski, who moved from fifth to silver position over the final 30 metres to clock a 1:44.89 PB, while Irishman Mark English prevailed over Dane Andreas Bube to take the bronze, 1:45.03 to 1:45.21.

As promised, the women’s 1500m was a thriller with Dutchwoman Sifan Hassan out-sprinting rival Abeba Aregawi of Sweden to the title.

After a sluggish start, the race came alive 500 metres from the finish when Hassan, the season’s world leader, made her way from the safety of last place to the head of the pack just as the bell sounded.

Aregawi, the reigning world champion, broke away with her and took command heading into the back straight. But Hassan didn’t let her pull away. Instead she bided her time, deciding to pounce some 10 metres before hitting the final straight. She held on triumphantly to clock 4:04.18 and become the first Dutchwoman to win a continental title in the event.

Bondarenko rises to the occasion

A wet surface and on-again off-again rains posed a major challenge in the men’s high jump where world champion Bogdan Bondarenko coped best, taking gold exactly one year to the day of his world title.

Four jumpers managed to clear 2.30m, but 2.33m proved too much for Czech Jaroslav Baba and Olympic champion Ivan Ukhov. Andriy Protsenko cleared on his third try to take the lead and put the pressure on Bondarenko, who passed at the height.

On his first go at 2.35m, Bondarenko clipped the bar with his heels, but sailed clear with his second. Protsenko missed once and twice more at 2.37m, giving Bondarenko the win.

Ukhov, whose only misses came at 2.33m, claimed the bronze.

Antoinette Nana Djimou of France retained her title in the heptathlon tallying a season’s best of 6551, the second-best score of her career.

Fourth after the first day, the 29-year-old opened the day with a 6.25m leap in the long jump before breaking the competition open with a 54.18m effort in the javelin throw which put her in the lead for good. She closed the competition with a 2:15.22 PB in the 800m to top Dutchwoman Nadine Broersen (6498) by 52 points.

Nafissatou Thiam of Belgium, who’ll celebrate her 20th birthday on 19 August, tallied 6423 points to take bronze and her first accolade at the senior level.

The heptathlon formed part of the IAAF Combined Events Challenge. Despite missing the gold medal, Broersen could at least take some consolation in the fact that her score propels her to the top of the overall standings with a substantial lead over Lilli Schwarzkopf.

400m titles to Rooney and Grenot

In a tight men’s 400m contest, British champion Martyn Rooney held off team-mate Matthew Hudson-Smith to take the title in 44.71, the fastest by a European this year. The pair were about even heading into the final straight but Rooney held his form en route to his fastest performance since 2008. Hudson-Smith, still just 19, clocked a big personal best of 44.75 to produce Great Britain’s first 1-2 in the event in 20 years.

Donald Sanford of Israel started fast, faded but regrouped just in time to take the bronze in 45.27, a national record.

The women’s one-lap race, dominated by Italy’s Libania Grenot, wasn’t nearly as close. Running in lane three, the Cuban-born Italian champion already made up the stagger as she rounded off the first bend, stormed down the backstretch and into the final turn to enter the home straight some five metres ahead of Ukraine’s Olha Zemlyak. Grenot slowed slightly over the final 40 metres, but encountered no problems carrying her lead through the finish, clocking 51.10.

Zemlyak meanwhile prevailed in a blanket finish for the minor medals in 51.36, just ahead of Spain’s Indira Terrero and Briton Christine Ohuruogu, who both stopped the clock in 51.38. A read of the photo finish gave the bronze to the Spaniard by two thousandths of a second.

The men’s 400m hurdles final was an unexpected treat for the near-capacity crowd that braved the conditions, courtesy of Kariem Hussein.

The 25-year-old Swiss champion made his intentions clear from the outset, running near the lead through the first four hurdles. Midway through the final turn he was clearly in the lead, one he carried into the home straight. With the crowd growing louder with every stride, he held on to win in a personal of 48.96, 0.10 clear of fast-closing Rasmus Magi of Estonia.

Denis Kudryavtsev of Russia, this year’s European Team champion, rounded out the medallists, taking bronze in 49.16.

Elsewhere in qualifying and semi-final action

Diamond Race leader Sandra Perkovic of Croatia threw 63.93m to lead qualifiers in the discus throw. But her team-mate Blanka Vlasic, the 2010 champion, was forced to pull out of the high jump qualifying round due to a pain in her right knee. 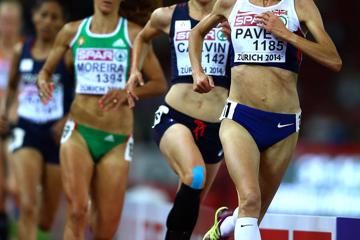 Pavey and Storl win gold on first day of Euro... 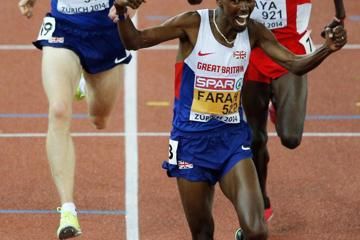 Three golds for Britain and a world lead for ... 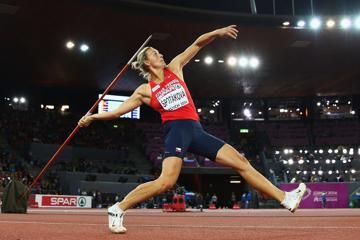 Spotakova completes her gold collection with ...