Lavillenie flies into the sky in London with 6.02m leap – IAAF Diamond League

The Frenchman, who had seen off Germany’s Bjorn Otto at 5.91m, sailed cleanly over on his first attempt at 6.02m to raise his outdoor best by one centimetre.

He had jumped 5.97m to win his London 2012 Olympic Games gold medal in the same stadium 12 months ago, and celebrated this victory like an Olympic champion, running across the track and leaping the advertising boards.

It was his fourth consecutive win higher than 5.90m.

Not satisfied with producing the world’s highest outdoor vault since 2008 – although he went over 6.03m to win at the 2011 European Indoor Championships in Paris – Lavillenie then decided to have a crack at Sergey Bubka’s 1993 World record and put the bar up to 6.16m.

On his first attempt, he knocked it off with his feet going up, and then fell under the bar twice.

“I am really happy because coming back to this stadium was amazing,” said Lavillenie. “I am definitely ready for Moscow. Before coming here I was jumping 80s and 90s easily, but now I have jumped over 6.00m in the Olympic Stadium, it was really important."

Otto was second with 5.77m with fellow German Raphael Holzdeppe third at 5.70m to repeat the podium from the Games.

The other world leads came from New Zealand’s Valerie Adams with 20.90m in the women’s Shot Put and Jamaica’s Shelly-Ann Fraser-Pryce who clocked a meeting record of 10.77 in the 100m heats, only to lose the final when Nigeria’s Blessing Okagbare posted her second African record in the space of two-and-a- half hours to take victory in 10.79.

It was Fraser-Pryce’s first 100m defeat of the year, although earlier she made a blistering return to the stadium where she won Olympic gold 12 months ago, winning her heat in the fourth quickest time of her life and 0.15 quicker than she had previously gone so far this year.

However, the Jamaican couldn’t repeat that run in the final when she got a terrible start and never made up the ground.

Fraser-Pryce finished fourth in 10.94 while Okagbare blazed through the finish line in 10.79 having run 10.86 in her heat earlier in the afternoon.

“I’m praying that I can stay healthy and repeat that in Moscow,” said the excited Okagbare, the 2008 Olympic Long Jump bronze medallist. “I’ve been working so long and so hard for this. I’m just happy that everything is falling into place.”

“I was trying to simulate running two fast back-to-back 100m races,” explained Fraser-Pryce. “I wanted to simulate a very good semi-final and final, so that’s what I tried to do. There is lots of work to do there.

Six women went under 11 seconds in the thrilling final. US sprinter Barbara Pierre equalled her personal best of 10.85 to take second while Trinidad and Tobago’s Kelly-Ann Baptiste was third in 10.93.

Having run her fastest time of the year in her heat with 10.93, the USA’s 2011 World champion Carmelita Jeter scratched from the final as a precaution after feeling tightness in her quadriceps.

Adams moved clear at the top of the women’s Shot Put Diamond Race with a decisive victory over Germany’s Christina Schwanitz.

The New Zealander produced six throws all beyond 20 metres; the longest of 20.90m eclipsed her own world lead by two centimetres and broke the meeting record.

“I was pretty happy with getting consistently over 20 metres,” she said. “I’m psyched to be here to close a chapter.

On the track, Kenya’s Augustine Choge repeated his 2010 victory in the historic Emsley Carr Mile, the 2012 World indoor 3000m silver medallist running a personal best of 3:50.01 to just edge out the 20-year-old Ayanleh Souleiman who broke his own Djibouti record with 3:50.07.

Souleiman’s second place means he extends his lead in the Diamond Race.

Kirui led off the last barrier but was outsprinted by the more experienced Kipruto to finish 0.1 in arrears.

USA’s David Oliver won a scrappy 110m Hurdles in 13.20 from Britain’s William Sharman as the Olympic champion and World record-holder Aries Merritt crashed out of halfway through the race.

Sharman clocked a personal best of 13.26 but Merritt hit the fourth barrier hard and could not recover. He was looking to dip under 13 seconds for the first time this year and seemed to be on course after he clocked a comfortable 13.14 in his heat.

The men’s Long Jump pitched the world’s top two in a head-to-head and it was Russia’s Aleksandr Menkov of Russia who came out on top with a best of 8.31m to avenge his defeat at the hands of Mexico’s Luis Rivera at the recent World University Games in Kazan.

So consistent until that loss, at first Menkov seemed to be off his game here. After two fouls, he only just avoided elimination with a third round jump of 7.69m and returned to fouls in rounds four and five before finally getting it right and knocking Australia’s Fabrice Lapierre’s 8.17m down to second in the last round.

Rivera was also below par, finishing fourth with a best of 8.00m.

Germany’s Christine Obergfoll appears to have the measure of 2011 World champion Mariya Abakumova in the Javelin this year. She handed the Russian a fifth consecutive beating to take an unbeatable 14-point lead at the top of the Diamond Race.

Obergföll won with a first round throw of 65.61m while Abakumova, who competed at the Russian Championships in Moscow just two days prior, was second with 64.48m.

The women’s 100m Hurdles was the pick of the non-Diamond League events as Olympic champion and 2011 World Athlete of the Year Sally Pearson returned to winning ways with her quickest run of 2013.

After just one win in five races since returning from her hamstring injury, Pearson’s commanding victory was a solid performance to back up her claim two days ago that she will be ready to defend her World title in Moscow.

“Everyone told me to be patient and believe in myself and that’s what I’ve done,” said Pearson. “I haven’t shied away; I’ve come here and worked hard every single competition.

“It’s three weeks yesterday to my race at the World Championships so it’s finally coming together.”

However, she is yet to decide whether to compete in Moscow. “It’s hard because obviously it’s only a couple of weeks until the worlds. I’m running out of time a bit,” said Ennis-Hill.

“I haven’t decided about the World Championships yet. I need to speak to my coach and have a think.”

Ohuruogu up to her old tricks

Great Britain’s Christine Ohuruogu knows about injuries and coming into form at the right time and the former Olympic and World champion seems to be conjuring up the old trick again.

The Olympic silver medallist, who grew up less than a mile away from the stadium, ran her fastest 400m ever outside of a major championships to beat the US pair Francena McCorory and Natasha Hastings in a season's best of 50.00. McCorory was second in 50.13 with Hastings 0.55 further back in third.

US sprinters dominated the women’s 200m too, led by Allyson Felix who won in a quick 22.41. The 2012 Olympic champion seems to be finding some form at last, just holding off her compatriot Shalonda Solomon.

That left Mo Farah and Usain Bolt to bring the meeting to noisy close.

Farah rode the stadium’s now-famous wave of sound one last time as he ran an outdoor lifetime best of 7:36.85 in the 3000m, leaving Ethiopia’s Tariku Bekele a long way adrift with a last lap of 54.2.

Bolt brought the curtain down on the meeting as he anchored a Racers’ Track Club team to swift win in the 4x100m, clocking a meeting record of 37.75. 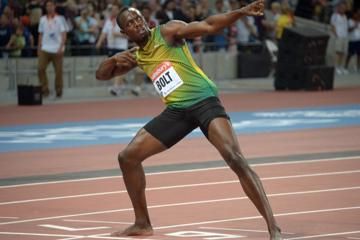 Bolt brings a bit of lightning to London – IA...