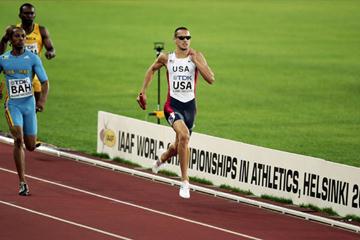 Osleidys Menéndez extended her recent domination of the Javelin.  The Cuban had won the Olympic title with a throw just one centimetre less than her World record of 71.54 metres in 2001. Those were the only two throws over 70 metres. Now there are four!  Christina Obergfoll of Germany amazed herself and us when she threw a European record of 70.03 metres in round two.  But Menéndez had already trumped that, with the second World record of the week, 71.70 metres with her first throw. Steffi Nerius won a second medal for Germany, bronze with 65.96 metres.

Radcliffe gets her gold at last

Paula Radcliffe finally won the major title that her talent and tenacity deserve, when she ran away from the field to win the marathon through the streets of the Finnish capital, in 2:20:57. That is the fastest time ever run in a major championship Marathon, and the fact that most of her pursuers set either a personal best or ran close to it is entirely due to Radcliffe’s uncompromising approach. As usual, she set off with the intention of running the legs of the competition and, in contrast to the Olympic Games last year, she succeeded admirably.

Radcliffe thus adds the World title to the superlative World record of 2:15:25 that she set in the London Marathon two years ago. She was followed home, as on several occasions in the past by Catherine Ndereba of Kenya, who was the previous World record holder, and also the defending champion.  In finishing second in 2:22:01, Ndereba thus failed by over a minute to emulate the men’s champion, Jouad Gharib of Morocco, who successfully defended his title, in the modest time of 2:10:10 on Saturday.  Third in the women’s race was Constantina Dita-Tomescu of Romania, whose eccentric tactics – dropping back then surging through the field - finally won her a medal, bronze in 2:23:19.

Radcliffe’s victory can never expunge the disaster of Athens when, as firm favourite, yet hampered by injury, she dropped out of the Olympic marathon at 36 kilometres. But, despite the occasional drawbacks, usually in track races, where her metronomic pace is not sufficient to ensure victory, this is another title to add to those which started with her breakthrough in winning the World Junior Cross Country title in 1992, and has included a European 10,000 and Commonwealth 5000 metres victory; in addition to a half dozen major marathon successes, which have netted her well over two million dollars.

Rashid Ramzi created a little bit of history when the Moroccan-born Bahraini won the first ever middle distance double of the championships, taking the shorter race in 1:44.24, largely due to the incompetence of the Olympic champion, Yuriy Borzakovskiy, who conspired to get boxed in when he should have been preparing his final sprint. When the Russian did get going, it was only good enough for silver, in 1.44.51. William Yiampoy of Kenya won the struggle for third, in 1.44.55.  So, a year after competing dismally in the Athens, when he was one of the fastest of the season at the 1500 metres, Ramzi has assumed the mantle of Hicham El Guerrouj, and proved a winner at 800 metres, a distance at which he was barely competent at outdoors when he arrived in Helsinki despite being an World Indoor medallist.

‘Borza’s compatriots in the 1500 metres made no mistake. Well, it didn’t seem so, until later. Yuliya Chizhenko was the fastest of the season, but defending champion, Tatyana Tomashova had looked good and confident in the semi-finals. We were all intrigued to see what the former Zenelch Tola of Ethiopia, now Maryam Yusuf Jamal of Bahrain could do, especially after Ramzi’s performance. Jamal had clocked superfast times for 800, 1500 and 5000 metres, but chose just the metric mile.

Jamal surged into a lead with 250 metres to run in a rapid race, but the Russian quartet ambushed her within 50 metres. It looked for a long time as if the Russians were going to get first four, as the US had in the men’s 200, and the Ethiopians in the women’s 5000 metres. But with ‘Tomo’ taking off for a repeat win, in 4.00.35, with Chizhenko in second in 4.00.93, and Olga Yegorova third in 4.01.46, Yelena Soboleva conceded fourth place in the final strides to Bouchra Ghezielle of France. However, after an appeal by Bahrain was upheld, Chizhenko was DQ’d, and Ghezielle promoted to bronze.

You do have to wonder at the Kenyan team tactics, or lack of them!  Yes, Ben Limo won the 5000 metres, but with four of the best/fastest men in the field, they really should not have left it to the lottery of the last lap. Sileshi Sihine of Ethiopia was the first man to break after a sedate 11 and a half laps, followed by defending champion, Eliud Kipchoge. Craig Mottram of Australia got in on the act, but Limo, vying with Mottram as the tallest man in the field strolled down the straight to win in 13.32.55, from Sihine, 13.32.81, and Mottram striking back at Kipchoge in the last five metres, to take bronze in 13.32.96.

The High Jump got off to a storming start on a pleasant evening, with all 13 men clearing 2.20 metres. But by the time they got to 2.29 metres, things were slowing down – only eight men over! Then the rot really set in. Seven men failed at 2.32 metres, leaving Olympic champion, Stefan Holm of Sweden worst of that bunch. Victor Moya of Cuba and Yaroslav Rybakov shared silver on the count-back. And the last man left standing with the bar intact at 2.32 metres – but only on the third attempt – was Yuriy Krymarenko of Ukraine, who won his country’s only gold, indeed, only medal.

Relays go to Russia and USA

The biggest surprise of the men’s 4x400 was that Christopher Brown of the Bahamas and Davian Clarke of Jamaica were right behind Jeremy Wariner with just 200 metres to run. Then Wariner woke up, and duly delivered the goods, victory and the 14th gold of the champs to Uncle Sam. Bahamas finished second as they had done, to the USA, in Edmonton 2001, and Jamaica was third.