But with Asbel Kiprop hoping to improve upon his stunning 1500m best of 3:27.72 last time round, and six – yes, six – male high jumpers who have cleared 2.40m or higher this year, plus an 800m that brings together Olympic champion and world record-holder David Rudisha, world indoor and outdoor champion Mohammed Aman and 20-year-old Olympic silver medallist NIjel Amos, who beat both last time they met on 31 May in Eugene, the 2014 Herculis meeting looks ready for the challenge.

Kiprop’s effort – which saw him record the fourth fastest time in history ahead of Britain’s Mo Farah, who set a European record of 3:28.81 – was one of the four IAAF Diamond League records at the Stade Louis II stadium last July, the others coming from Amantle Montsho in the 400m (49.33), Renaud Lavillenie in the pole vault (5.96m) and the US women’s 4x100m team (41.75).

At the IAAF Diamond League meeting in Paris on 5 July, Kiprop undertook a “warm-up” for his Monaco 1500m over 800m, beating Amos into second place as he set a world-leading time of 1:43.34.

But the Kenyan double world champion could yet find his plans frustrated by Djibouti’s world indoor 1500m champion Ayanleh Souleiman, or the current Diamond Race leader, fellow Kenyan Silas Kiplagat, whose season’s best of 3:29.70 is only slightly slower than that of Kiprop’s 3:29.18.

Rudisha, feeling his way back this season after the knee injury which kept him out of action for a year, gave his strongest indication yet that he is heading back to his best form as he won last weekend’s IAAF Diamond League event in Glasgow, equalling Kiprop’s 2014 best in so doing.

French runner Pierre-Ambroise Bosse, the fastest European this year, will also pose a threat, as will Duane Solomon of the United States, who won this event in Monaco last year, and former world indoor champion Abubaker Kaki of Sudan.

The men’s high jump has been the outstanding single event so far this year on the athletics calendar, and Monaco could raise the level to even more dizzying heights.

All the big names are here – Mutaz Essa Barshim, Qatar’s world indoor champion who set an Asian record of 2.42m at the New York IAAF Diamond League meeting, despite being beaten on count-back by Ukraine’s world champion Bogdan Bondarenko. Russia’s Ivan Ukhov, who cleared 2.42m indoors this year and has a 2.41m from the opening IAAF Diamond League meeting in Doha, will also be in Monaco, as will three other jumpers who have cleared 2.40m: Canada’s Olympic bronze medallist Derek Drouin, Russia’s Aleksey Dmitrik and Ukraine’s Andrey Protsenko.

Also in the mix will be Erik Kynard, the Olympic silver medallist from the United States, who managed a personal best of 2.37m this year.

Let’s put it this way: the meeting record of 2.37m by Russia’s Andrey Silnov in 2006 could be under threat.

Despite the withdrawal of Jamaica’s World silver medallist Warren Weir, who leads this year’s world lists with 19.82 but is now concentrating on the impending Commonwealth Games in Glasgow, and the man who stands second in those rankings with 19.84, Alonso Edward of Panama, who has a minor hamstring niggle, the men’s 200m features a very strong field.

Tyson Gay, the former world champion, continues his comeback with his first race at this distance this year, and faces the former Olympic 100m champion, his fellow US sprinter Justin Gatlin. Also in the mix, the US runner who took bronze at last year’s World Championships in Moscow, Curtis Mitchell, France’s European 100m champion Christophe Lemaitre, and the in-form Nickel Ashmeade of Jamaica, who has a 2014 best of 19.95.

In the women’s 400m hurdles, world champion Zuzana Hejnova makes her first major appearance of the season. She faces the 2014 leader Kaliese Spencer of Jamaica, who has a season’s best of 53.41, and US champion Kori Carter, who has run 53.84 this year.

World 400m champion LaShawn Merritt of the United States is the favourite here after clocking 43.92 in his Lausanne defeat by Olympic champion Kirani James. But he faces strong opposition in the form of the athlete who set an African record of 44.01 earlier this month, Isaac Makwala of Botswana. Luguelin Santos, the 20-year-old Olympic silver medallist from the Dominican Republic, should also not be written off.

The women’s 100m is stacked with talent, although world and Olympic champion Shelly-Ann Fraser-Pryce is still below her best this year, with a fastest 2014 time of 11.10, as she recovers from a foot injury.

Also in the race will be the US Olympic 200m champion Allyson Felix, and her compatriot Tori Bowie, who heads this year’s world lists with 22.18. Blessing Okagbare, the Diamond Race leader over 200m, is also in the field along with world 100m and 200m silver medallist Murielle Ahoure and Jamaica’s double Olympic 200m champion Veronica Campbell-Brown.

Adams will be mindful of the threat posed by Michelle Carter of the United States, who pushed her close in New York, and Germany’s world silver medallist Christina Schwanitz, whose season’s best of 20.22m is only 24cm short of that of Adams.

In the women’s triple jump, Caterine Ibarguen will also find her dominant position challenged by a field which includes Russia’s world indoor champion Yekaterina Koneva, whose season’s best of 14.83m is only four centimetres behind hers.

Double Olympic champion Barbora Spotakova, back in action after taking last year out to have a child, has already indicated she will soon be back at full power, having won in Lausanne with 66.72m. Kimberley Mickle of Australia and Linda Stahl of Germany look capable of offering her the strongest challenge.

Genzebe Dibaba, who set three world indoor records this winter, will be running the first Monaco IAAF Diamond League race over 5000m for women. Having won in Rome, where she clocked 14:34.99, she will be confident against a field which includes the winner of the two miles in Eugene and the 3000m in Lausanne, Mercy Cherono of Kenya.

In the men’s long jump, the job of Russia’s world champion Aleksandr Menkov has been simplified by the withdrawal through injury of Jeff Henderson of the United States, who has jumped 8.43m this year. But China’s Li Jinzhe, the world indoor silver medallist with a 2014 best of 8.47m, remains.

Hansle Parchment, this year’s world leader in the 110m hurdles with 12.94, has been forced out with injury, which makes life easier for France’s Pascal Martinot-Lagarde, who has a 2014 best of 13.05. World champion David Oliver of the United States is looking to improve his season’s best of 13.21, and his compatriot Aries Merritt, the world record-holder, will also be seeking to better his season’s best of 13.78.

The men’s 3000m steeplechase has lost Kenya’s world and Olympic champion Ezekiel Kemboi with a slight hamstring strain, but the field remains hugely strong on a track where Kemboi’s compatriot Brimin Kipruto set an African record in 2011 of 7:53.64, only one hundredth of a second away from the world record held by Qatar’s Saif Saaeed Shaheen.

Jairus Birech, winner in Rome and Oslo and leader of the 2014 listings with 8:02.37, looks the favourite.

In the men’s discus, Poland’s Piotr Malachowski leads this year’s world lists with 69.28m and wants to make an impact in what will be his last competition before next month’s European Championships in Zurich. Estonia’s former Olympic champion Gerd Kanter, with a season’s best of 64.91m, and Iran’s Ehsan Haddadi, who has thrown 65.23m this year, may have different ideas.

The women’s pole vault offers the prospect of the Olympic gold and silver medallists, respectively Jenn Suhr of the United States and Yarisley Silva of Cuba, facing each other, with Brazil’s former world champion Fabiana Murer, who has cleared 4.80m this year, also likely to figure. 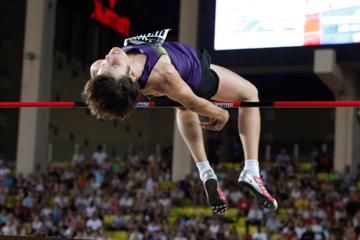 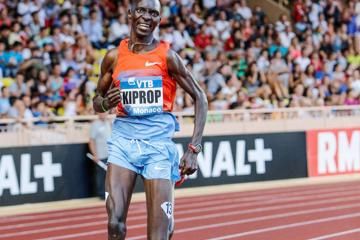 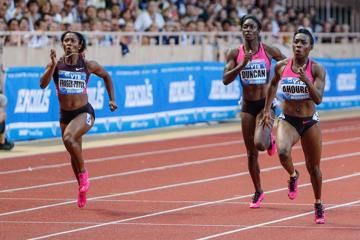